Will the Fall of Afghanistan Lead To a War over Taiwan? 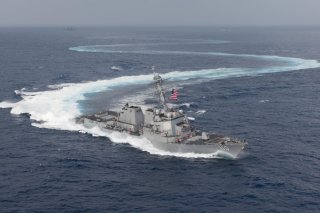 Should the stunning Taliban conquest of Afghanistan strike fear in the hearts of America’s Indo-Pacific allies that they can no longer rely on U.S. defense commitments? The Chinese government certainly thinks so. Not wanting to miss an opportunity to strike at the United States, Chinese media are already warning Taiwan to look carefully at the shocking collapse of the U.S.-supported Afghan government and recognize that “when its interests require it to abandon allies, Washington will not hesitate to find every excuse to do so.” The United States, they warn, is just a “paper tiger” and that its defeat is a “clearer demonstration of American impotence than Vietnam.”

These are highly inflammatory words, but they do pose relevant questions. Should Taiwan doubt America’s commitment to its defense following the tragic debacle unfolding in the Middle East? Would the United States simply step aside, as it has just done in Afghanistan, should China invade Taiwan?

The answer to these questions is no, these are vastly dissimilar cases and comparisons are impossible to draw. At the heart of these differences lies the fact that the driving rationale for the conflict in Afghanistan, the global war on terror no longer possesses the salience it did after 9/11, while Taiwan’s importance to East Asian security and the global economy has increased dramatically over the past decade.

Taiwan is a key piece in a growing great-power rivalry between the United States, China, and Japan in the Taiwan Strait which links East China, South China, and Philippines Seas and through which flows an estimated 30 percent of global trade. Furthermore, the region has been of critical importance to the United States since the end of World War II and, rather than waning in relevance, its prominence to U.S. national security continues to increase. The United States already has defense agreements with Japan, South Korea, the Philippines, and Australia and is forming security relationships with Vietnam and Singapore.

American history demonstrates that the United States just isn’t good at fighting small wars. By contrast, an invasion of Taiwan could quickly escalate to a global conflict that likely would bring in America’s allies in Asia as well as Great Britain, the kind of war that America has traditionally excelled at. Indeed, the thread that connects America’s greatest military victories was their nature: total wars. The Mexican American War, the Civil War, World War I, and World War II saw the country (or the North in the case of the Civil War) mobilized behind a common goal, the total defeat of the enemy. These were wars with tremendous strategic and moral values at stake: ensuring American access to the Pacific Ocean, ending slavery, keeping the world safe for democracy, and defeating fascism and militarism to guarantee a peaceful world.

A conflict over Taiwan would escalate to a level of global importance mirroring the larger conflicts the United States has continually demonstrated its willingness to fight—though the presence of nuclear weapons obviously negates a drive for total victory. However, as Taiwan is an island, total victory would not be necessary for a successful outcome of the war, only Taiwan’s continued survival matters.

One of the most important differences between Taiwan and Afghanistan is their level of democratization. Even after twenty years, Afghanistan was only at the beginning of a long road toward becoming a democratic state; its rapid collapse in the face of the Taliban’s assault doesn’t mean that progress had not been made. Democratic development is full of peaks and valleys and takes it takes generations before a nation might comfortably be considered a democracy. Furthermore, whatever chances for survival Afghanistan might have had were wiped away by President Donald Trump’s February 29, 2020, agreement with the Taliban which committed the United States to withdraw its forces by May of 2021 and release of five thousand Islamic fighters in exchange for a cessation of Taliban attacks on American forces. The Afghan government was deliberately excluded from these negotiations a move that undercuts whatever legitimacy it might have possessed in Afghanistan and throughout the region. In retrospect, it should not be a surprise that the U.S.-trained Afghan army would not fight and die for a government that the United States no longer had an interest in supporting.

The differences between Afghanistan and Taiwan could not be starker. That Taiwan has successfully developed a vibrant and prosperous democratic society and would be fighting to defend itself against an attack from an authoritarian power raises the stakes for the U.S. government, the American people, and its democratic allies in the region and around the world. The crushing of Taiwan would be comparable to Nazi Germany’s dramatic conquest of France in May 1940, which shocked the United States out of its isolationism and convinced it to prepare for war.

Equally important is Taiwan’s strategic significance to America’s allies. Taiwan is the linchpin of the first island chain stretching from South Korea to Vietnam created by the United States during the early Cold War and is now used to prevent Chinese expansion into the Pacific. Taiwan’s fall would mean the failure of U.S. efforts to contain China’s naval power and would expose Japan and the Philippines to increasing Chinese pressure. The Japanese recognize Taiwan’s strategic importance resulting in the Japanese government escalating its warnings to China regarding the consequences of an invasion.

However, the most important point in Taiwan’s favor is the Taiwan Semiconductor Manufacturing Company (TSMC) which produces the vast majority of the microchips needed to power the world’s computers. Its capture by China would in one stroke give the Chinese a powerful stranglehold on the global electronics industry. The world is now recognizing the importance of this threat and while the United States is actively trying to shift chip production back to the United States, it will take years to accomplish at the cost of trillions of dollars. Thanks to the enormous success of TSMC, Taiwan’s continued independence has become an issue of world importance.

Taiwan has responded to China’s threats by restating its confidence in the United States and assuring the world that both the Taiwanese people and their leaders are prepared to fight and die for their country. However, it also needs to undertake the military modernization under the Overall Defense Concept and work with the U.S. and regional allies to make an invasion of Taiwan so unpalatable to China that it will keep to its diplomatic and psychological warfare efforts to undermine the Taiwanese government rather than choose hostilities.

For these reasons it is important for China to understand that the world doesn’t consider Taiwan simply an internal matter. Taiwan has significant strategic importance Afghanistan no longer had, thus increasing the likelihood that an invasion would lead to a much wider conflict.

Equally important, the United States must not overreact to the debacle that has occurred in Afghanistan. The goal of the allies’ defense policy is not to defeat China in a war, but to deter it from contemplating an attack. Engaging in further saber-rattling will only exacerbate an already critical situation.

Gregory Mitrovich is an award-winning historian whose forthcoming book is entitled The Contest: The United States, Great Britain, Germany, and the Rivalries that Forged the American Century.