Will the FBI Search at Mar-a-Lago Embolden or Destroy Trump? 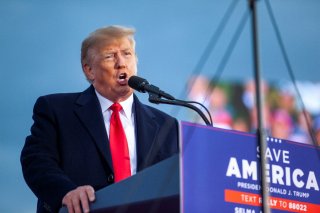 It’s been a busy day in Trumpworld. First came the declaration from New York Times journalist Maggie Haberman that her forthcoming book Confidence Man contains photos, which have now circulated on the internet, of documents that Donald Trump tried to flush down various toilets. Then Peter Baker and Susan Glasser, who have a new book coming out called The Divider, revealed that Trump had apparently complained to his chief of staff, John Kelly, that he wanted “totally loyal” generals like Hitler’s. Now, in a fresh development, the FBI has conducted a court-authorized search of Mar-a-Lago in pursuit of classified documents that he allegedly secreted there. As Trump weighs running for the presidency for a third time, the implications of the FBI’s foray into Mar-a-Lago for his political fortunes are considerable. Will it boost his status as a martyr, prompting the GOP to rally around him? Or is it the first real sign of myriad legal difficulties, ranging from wire fraud to election tampering in Georgia to the January 6 attack, that could fatally entangle him?

The consternation from the political right has been immediate. Steve Bannon told Fox that “this is about pure power politics” to ensure that “Trump can’t run for federal office again.” Rep. Marjorie Taylor Greene likened the FBI’s action to the “rogue behavior” of communist countries: “The political persecution MUST STOP!!!” Former Ambassador to Germany Richard Grenell urged, “Wake up, America!” Trump is depicting the raid as a heinous overreach by a deep state Justice Department that has repeatedly tried to torpedo him. “They even broke into my safe,” he complained.

Trump’s detractors are also out in force. His former press secretary, Stephanie Grisham, told CNN, “I watched him go through documents, throw some away, rip some up and put some in his pocket.” It would be no small irony if Trump’s penchant for destroying documents came to haunt him. But that would depend on whether the FBI actually unearths any damning material at Mar-a-Lago or not. If it turns out to be a wild goose chase, Trump will be fortified in his quest to regain high office. But Trump’s daughter-in-law Lara is already taking defensive measures, declaring on Fox, “Look, my father-in-law, as anybody knows, who’s been around a lot, loves to save things like newspaper clippings, magazine clippings, photographs, documents that he had every authority … to take from the White House.”

The short-term upside for Trump, in any case, is clear. He is now once more the center of political attention at a moment when President Joe Biden was scoring a bunch of victories this past week. Trump, a master showman, will milk the FBI search for all the publicity he can squeeze from it. But Trump has to be concerned about the search because it strongly suggests that someone inside Mar-a-Lago told the FBI that he was hiding documents.

So far, the National Archives says it has retrieved fifteen boxes of White House records that Trump illegally took with him to Mar-a-Lago upon departing office. To obtain a search warrant, the FBI would have to demonstrate probable cause to prompt a federal judge to sign off on it. The question remains: what documents were considered to constitute a grave threat to national security to prompt the FBI to embark on the momentous step of searching the offices of a former president?