Will Fidel Castro's Departure Be The Catalyst For Big Changes In Cuba? 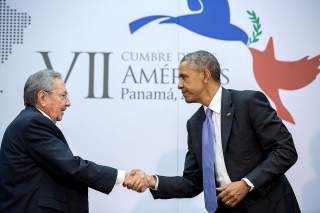 For more than fifty years, Fidel Castro was the bane of U.S. presidents—ten of them all together, beginning with Dwight D. Eisenhower and ending with George W. Bush. Not only did Castro openly defy the United States in its own backyard, he brought to life Washington’s worst Cold War nightmare about instability in Latin America. What began as a nationalist revolution against Cuba’s hated military dictator, Gen. Fulgencio Batista, turned into a communist revolution that nationalized all U.S. property on the island, allied itself with the Soviet Union, and then threatened the very existence of the United States during the 1962 Missile Crisis. The fear of “another Cuba” haunted U.S. policy toward Latin America until the end of the Cold War, leading Washington to support brutal military regimes in South America and prosecute bloody civil wars in Central America, all in the name of suppressing Marxist guerrillas inspired by Castro’s example.

Washington was stuck with Castro after President John F. Kennedy agreed not to attack Cuba in exchange for the withdrawal of Soviet nuclear missiles from the island. (Kennedy also secretly agreed to withdraw U.S. missiles from Turkey.) Over the ensuing decades, U.S.-Cuban relations settled into certain routines, albeit swinging wildly from one to another. Periodically, Washington and Havana agreed to talk with one another—usually about small issues of mutual interest, like the perennial problem of Cuban migration—but sometimes about the larger issue of normalizing relations. At other times, crises brought the two countries to the brink of open conflict—over Castro’s military involvement in Angola, his support for revolutionaries in Central America and his willingness to occasionally open the migratory floodgates (in 1965, 1980, and 1994).

Surprisingly, the end of the Cold War did not break this pattern. By then, the exiles who fled Cuba in the 1960s and 1970s had become successful, naturalized U.S. citizens who were turning Miami into the metaphoric capital of Latin America. But they had not forgotten their past; their animosity toward Fidel Castro still burned white hot, and they were determined to prevent any president from normalizing relations while Castro remained in power.

Strategically located in the swing state of Florida, conservative Cuban Americans held U.S. policy hostage for a generation, intimidating Democratic presidential candidates and giving Republicans a dependable base. But over time, the Cuban American community evolved, becoming more politically heterogeneous. Those who arrived after the Cold War came for economic reasons and did not nurse the same political vendettas as their predecessors. Cuban Americans born in the United States were not bullet-voters like their parents and grandparents, for whom Cuba trumped all other issues.

Barack Obama recognized this shift, appealed to moderates in the community during the 2008 campaign, and won more Cuban American votes than any Democrat since Bill Clinton. Then he solidified their support by lifting all restrictions on their ability to travel to Cuba to visit relatives and send them remittances. In 2012, he won half the Cuban American vote in Florida and polls showed that a narrow majority of the community favored a change in U.S. policy. Obama delivered that change on December 17, 2014, when he and Raúl Castro announced their intention to begin the process of normalizing U.S.-Cuban relations.

Barack Obama was the only U.S. president since 1959 who did not have to deal directly with Fidel Castro, though “the old man” was never far off-stage. Sidelined in 2006 by intestinal bleeding, Castro never returned to office, handing the leadership baton to his brother Raúl and retiring officially in 2008. Unlike many Cubans, Fidel Castro was not enthralled by America’s first African American president or his policy of engagement. For six weeks after Obama’s and Raúl Castro’s announcement, Fidel remained conspicuously silent, commenting only when rumors began to circulate that he must be dead since nothing else could explain his silence on such a momentous event. When he finally released a statement, it was buried at the end of a long letter reminiscing about his days at the University of Havana. Fidel’s verdict was lukewarm at best. "I do not trust the policy of the United States," he began, but then conceded,"The President of Cuba has taken pertinent steps in accordance with his prerogatives."

A year later, when Obama became the first sitting U.S. president to visit Cuba since Calvin Coolidge in 1928, Fidel was more openly critical. In an angry editorial on the front page of the Communist Party daily Granma, he took umbrage at Obama giving advice to Cubans on how to organize their politics and economy. Castro chided Obama for trying to "elaborate theories on Cuban politics," and warned him against "the illusion" that Cubans would renounce the revolution to curry favor with the United States. "We do not need the empire to give us anything," he concluded defiantly.

Imbued with deep suspicion of U.S. intentions, reflecting a hundred years of Cuban history and a half century of his own experience, Fidel Castro never believed the United States would truly reconcile itself to a sovereign and independent Cuba, free of U.S. tutelage. It never had before. From his vantage point, Castro saw Obama as a wolf in sheep’s clothing, rolling a Trojan Horse of soft power subversion into Havana from the cargo hold of Air Force One. Other Cuban leaders shared his skepticism and his outspokenness legitimized their complaints.  A few weeks after Castro’s commentary, Foreign Minister Bruno Rodríguez, called Obama's statements during his visit "a deep attack on our ideas, our history, our culture and our symbols." Castro’s death may make such skeptics more reluctant to criticize Cuba’s relationship with the United States—unless President Trump turns back the clock to a policy of hostility and restores anti-Americanism to favor in Havana.

Will Fidel Castro’s departure from the political scene be the catalyst for big changes in Cuba or in U.S.-Cuban relations? The reality is that big changes are already underway and have been for the past several years. They are driven not by the personality of either Fidel or Raúl Castro, but by larger forces propelling Cuba toward market-oriented reforms as a necessary condition of economic survival, and propelling both Washington and Havana toward a new modus vivendi.

For Washington, the exhaustion of the old policy of hostility—its ineffectiveness, its diplomatic cost to U.S. interests in the rest of Latin America, and its shrinking base of political support among Cuban Americans — made a policy change both sensible and politically feasible. For Havana, the vision of an economic future based on tourism, foreign direct investment, and expanded trade, demands rapprochement with the United States.

These impersonal forces have not changed with the death of Fidel Castro, nor with the election of Donald Trump. In the short term, political expediency in one or both capitals may slow the pace of change, but both Cuba and U.S.-Cuban relations are moving away from the conflicts, deadlocks and dead-ends of the past.

For both Cuban exiles and U.S. policymakers, Fidel Castro was a symbol—a symbol of a revolution gone awry, of betrayal of the communist menace. From Cuban exiles, he took away their government, their property, and their country. From U.S. policymakers, he took away nothing less that the presumptive hegemony of the United States in Cuba and, by extension, in Latin America at large. Fidel Castro, the symbol, still elicited rage from his adversaries long after Fidel Castro, the man, had retired. Now the man has died, and judging from the cathartic celebrations in Miami, perhaps the symbol has passed away as well. Perhaps both Miami and Washington will finally be free to pursue a policy toward Cuba that faces the future rather than one rooted in the grievances of the past. Perhaps Havana can as well.

William M. LeoGrande is Professor of Government at American University in Washington, DC, and co-author with Peter Kornbluh of Back Channel to Cuba: The Hidden History of Negotiations between Washington and Havana (University of North Carolina Press, 2015)

Image: April 11, 2015 "The culmination of years of talks resulted in this handshake between the President and Cuban President Raúl Castro during the Summit of the Americas in Panama City, Panama." (Official White House Photo by Pete Souza)​