Will to Fight: Are Americans and Chinese Ready to Die for Taiwan? 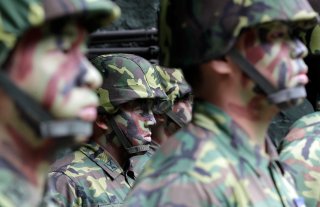 A war with China over Taiwan would generate high casualties, destabilize the global economy, and destroy billions of dollars worth of American military equipment. A strategic defeat for the United States in a war with China would be a very real possibility, though Chinese leaders face similar risks. Nonetheless, both the United States and the People’s Republic of China (PRC) are posturing for war. President Joe Biden has made escalatory diplomatic statements and deployed military advisors to Taiwan, while the PRC has stepped up its threatening military exercises. While this kind of brinksmanship is useful for strategic deterrence, it is also very risky. The United States and China could easily stumble into an unplanned high-intensity war. However, it is not at all clear that either side is psychologically prepared for such a war.

The U.S. Rationales for War

The rationale for fighting a war in defense of Taiwan has not been made clear to either the U.S. armed forces or the public. Why should Americans die for Taiwan? There is no treaty requiring the defense of Taiwan, an island that the United States does not formally recognize as an independent state.

Asking Americans to die in defense of Taiwanese democracy will be a tough sell in the wake of the disastrous Afghanistan withdrawal. Given the Biden administration’s argument that preserving Afghan democracy was not worth American lives—arguably an America First approach to foreign policy—why would preserving Taiwanese democracy be worth American lives? It could be difficult to answer this question without drifting into unsettling moral debates that the Biden administration might like to avoid. A compelling ideological rationale for war over Taiwan is unlikely to emerge from the government any time soon.

Cold geostrategic realism seems to be the most common underpinning of arguments in favor of defending Taiwan. In 2018, realists John J. Mearsheimer and Stephen M. Walt suggested that the United States would benefit from defending Taiwan because it has considerable economic resources, could be used as a giant “aircraft carrier” against China, and out of fear that abandoning Taiwan would undermine U.S. credibility in Asia.

While these realpolitik calculations may or may not be solid geostrategic arguments, they would not necessarily motivate hundreds of thousands of U.S. military personnel and hundreds of millions of civilians to support a war that could lead to high casualties and global economic disaster.

Will the U.S. Military Fight and Die for Taiwan?

Given the past twenty years of solid American tactical performance, it may be difficult for U.S. political or military leaders to imagine Americans refusing to fight. Americans have not experienced a serious tactical defeat on the battlefield since the end of the Vietnam War.

However, America’s military has not been in a high-intensity shooting war with a peer adversary since World War II. We do not truly know if the vaunted military professionalism that kept Americans fighting through the unpopular Iraq and Afghanistan wars will be enough to carry our forces through tens of thousands of casualties in a war over Taiwan.

Are American airmen, sailors, soldiers, and marines ready to die by the thousands to protect Taiwanese semiconductor manufacturing or the now confused notion of U.S. military credibility? We assume that they will do as they are told. But given the stakes, this assumption needs to be revisited.

Are American Civilians Ready to Shoulder the Burdens of War?

While most U.S. civilians could generally ignore the wars in Iraq and Afghanistan without consequence, they will not be spared from a war with China. At the very least, Americans at home would experience severe economic disruption as trade with China and other Asian nations screeches to a halt. Americans can also expect extended disruptions to internet services as Chinese hackers would do their best to disrupt the commercial and military logistics chains that feed the American war machine. All Americans will be directly and intimately involved in a war over Taiwan.

Are American civilians ready to support Biden’s pledge to defend Taiwan from a Chinese attack? They might do so in the right circumstances, such as in the aftermath of an unprovoked Chinese attack on U.S. military forces. Millions of Americans who had never heard of Pearl Harbor immediately lined up at military recruiting stations after the Japanese surprise attack on December 7, 1941. Al Qaeda’s 9/11 attacks prompted a similar—though much smaller—outpouring of patriotic support for war. But given the current divisions in U.S. society and culture, it is not at all clear that Biden can count on Americans to back a war with China over Taiwan.

Would Chinese Communists Die for Taiwan?

Chinese leaders may be confident in their ability to invade Taiwan, defeat the Taiwanese armed forces, stave off an American counterattack, and secure their gains. But they certainly also know that they will suffer heavy casualties, see much of their newly purchased military hardware laid to waste by the United States, and weaken their own economy in the process. China’s prized Belt and Road Initiative would be severely damaged as the United States and its allies would attempt to cut off China’s access to its global extractive industries.

While they probably can count on their military forces to start a war, the Chinese People’s Liberation Army’s air, naval, and ground forces have not been in a high-intensity shooting war since their failed military incursion into Vietnam in 1978. Their estimated performance in a conventional war against the United States remains a matter of almost pure speculation. Thus, Chinese overconfidence might help fuel a war that would not serve the PRC’s best interests. And while the Chinese Communist dictatorship may have less to fear from a disgruntled polity than American policymakers, Chinese leaders are certainly aware that their tenure may not survive the double impact of a major military and economic catastrophe.

America Must Examine the Will to Fight

The will to fight is the disposition to fight, act, and persevere in war. America’s insufficient knowledge on this issue is clear: We do not understand our own (or China’s) will to fight. This gap in knowledge leaves our senior leaders dangerously ill-informed. Chairman of the Joint Chiefs of Staff General Mark Milley recently stated that he is attempting to understand the factors that contributed to the Afghan Army’s failure to fight. Milley should not have been put in the position of having to make this kind of ad hoc calculation in the wake of a strategic defeat. U.S. military and political analysts can and should do a better job preparing senior leaders for war.

Human will cannot be accurately calculated because humans are not machines. Leaders should be wary of overly confident predictions. Still, Milley is on the right track. Arguably, the best way to understand the will to fight is to break down its inputs individually. The RAND corporation offers two factor-by-factor analytic models—one military and one national—designed to understand and forecast will to fight. Other experts are studying ways to formalize will to fight analysis. These and other existing models should be explored.

The U.S. Government should attempt to apply these approaches to understand both the Chinese and American will to fight before the United States suffers a strategic defeat or even a pyrrhic victory over China. At the very least, as Biden ratchets up diplomatic tensions, he should consider ways to prepare the U.S. military and public for a war that, while probably not desired by either side, seems increasingly probable.

Dr. Ben Connable is the Director of Research at DT Institute and an adjunct professor of security studies at Georgetown University. He led U.S. Government-funded research on the will to fight at the RAND Corporation from 2016-2021.