Will Gitmo Throw a Wrench in the U.S.-Cuba Rapprochement? 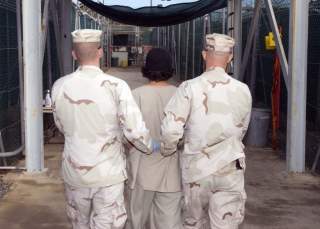 Raul Castro has insisted that the United States return control of Guantánamo Bay to Cuba as part of the normalization of relations between the two neighbors. He has good reason to do so. Not only is American control over the bay a powerful symbol of the imperial condescension that characterized U.S.-Cuban relations for the first half of the twentieth century, but it also constitutes a veritable national-security concern for Cuban leaders. How can Cuba be truly free and independent with an unwanted foreign military base on its soil?

Havana knows, however, that the United States is unlikely to relinquish control over Guantánamo any time soon. The very fact that Castro’s demand is noisily being made in public suggests that any private solicitations made as part of the ongoing diplomatic thaw between Cuba and the United States were resoundingly rebuffed. Indeed, the Obama administration has been clear that it has no intention of allowing the closure of Guantánamo. The question is thus how the two sides will decide to deal with the thorny issue of the base.

It is hard to see how the dispute could be resolved in a way satisfactory for both sides. The entire history of the U.S. presence at Guantánamo has been one of the Thucydidean dictum that, in international politics, “the strong do what they can and the weak suffer what they must.” Selected for its excellent harbor and strategic location at the southern tip of Cuba, the bay area was occupied by the United States following the conclusion of the Spanish-American War at the end of the nineteenth century, when U.S. troops joined with local revolutionaries to oust the Spanish Empire from Cuba. The United States loomed large over its newly independent neighbor, enjoying a vast power disparity that allowed Washington to insist on generous rights and privileges being included in Cuba’s constitution. One concession demanded by the Americans was the freedom to construct naval bases on the island. In 1903, the United States was given full jurisdiction and control over Guantánamo Bay.

Cuba remained an effective U.S. protectorate for the first six decades of the twentieth century, a weak Caribbean nation whose corrupt leadership was in hock to the United States and whose economy seemed to be almost entirely owned by absentee American landlords. With the fall of the Batista regime in 1959, and the installation of a revolutionary government under Fidel Castro, the United States irrevocably “lost” Cuba as a compliant satellite state. It did not, however, lose Guantánamo Bay: even though the communist government of Cuba has denounced the unequal treaties governing the U.S. occupation of Guantánamo (Havana insists that the agreements were signed under duress and thus are illegitimate and, indeed, unenforceable under international law), there has never been any question of attempting to “liberate” Guantánamo by force. The United States is too strong. Cuba is too weak. The status quo is too firmly entrenched.

How, then, to resolve the dispute? The ideal scenario for Cuba would be for the United States to voluntarily decides to extricate itself from Cuba. There are precedents, after all. The United States occupied several strategically important Japanese islands (Okinawa and the Bonin/Ogasawara Islands) following the conclusion of World War II, for example, but gradually agreed to the reversion of these territories to Japanese control during the 1960s and 1970s. Under President Carter, too, the United States willingly ceded ownership of one of its most coveted overseas possessions of all time: the Panama Canal Zone, which had been established in 1903—the same year that the original lease over Guantánamo Bay was signed.

Domestic politics, as well as geopolitical considerations, are likely to ensure that no such handover will take place regarding Guantánamo, however. Unlike Japan during the Cold War, Cuba has little to offer the United States in return for Guantánamo. And President Carter took a lot of heat for renouncing sovereignty over the Canal Zone, a move that was characterized as idealistic and naïve by his political opponents. Carter’s detractors were remorseless. Why give up a strategically important asset for no obvious geopolitical gain? A senator from Carter’s own party, S.I. Hayakawa, summed up the sentiment: “We should keep the Panama Canal. After all, we stole it fair and square.” President Obama would endure similar ridicule and opprobrium—as would any future president—if Guantánamo was ever handed back to the Cubans, especially absent any change in regime there.

If the United States is unlikely to give up Guantánamo, yet the Cubans appear resolute in their desire to win it back, what is the future of the dispute? Perhaps the best that both sides can hope for is a frozen conflict over the status of Guantánamo, one which is allowed to smolder divorced from wider U.S.-Cuban relations. Spain and Britain are able to coexist (periodic flare-ups notwithstanding) despite London’s refusal to cede control over Gibraltar; Mauritius and Britain similarly enjoy excellent diplomatic relations regardless of a long-running dispute over control of the Chagos Islands; and Morocco and Spain have similarly managed to avoid the Spanish enclaves of Ceuta and Melilla becoming the defining characteristic of their bilateral relationship.

The enormous disparity in power between the United States and Cuba might even be a stabilizing force when it comes to guaranteeing that the Guantánamo issue does not derail efforts towards a wider diplomatic rapprochement. With Cuba enjoying absolutely no prospect of being able to seize Guantánamo by force (as, for example, India did with the Portuguese enclave of Goa in 1961; or as Argentina attempted to do in the Falkland Islands in 1982), a frozen conflict ought not to prove unstable in any way. In short, Thucydides was right: the strong in this instance will carry on doing as they please, and the weak will continue to suffer what they must. Paradoxically, this logic might just ensure that U.S.-Cuban relations can continue to improve, even as the U.S. military presence at Guantánamo Bay remains steadfast.