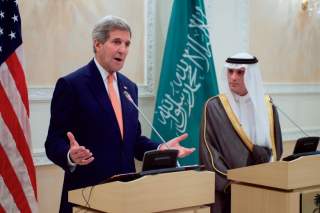 Editor’s Note: The following is an interview with Ian Bremmer conducted by TNI Assistant Managing Editor Rebecca M. Miller. Mr. Bremmer serves as president of the Eurasia Group, a political-risk consultancy, and a Global Research Professor at New York University. He is the author of the new book Superpower: Three Choices for America’s Role in the World.

Miller: As you recently stated during a Bloomberg interview, the deal itself might be bad, but the geopolitics of the deal are good. What sorts of advantages or benefits do you think future U.S. administrations down the line could reasonably gain (geopolitically) from the current deal?

Bremmer: The main benefit has to do with the price of oil. As sanctions on Iran are lifted, more Iranian crude will hit the market. We expect 500,000-600,000 extra barrels per day by next spring and one million by the end of 2016. The extra supply means oil prices will be lower for longer.

Russia, which draws half its government revenue from energy exports, will be weakened by the lower price. Venezuela, which is more deeply dependent on oil revenue than any major exporter in the world, will also be weakened. In both cases, that’s useful for the United States.

In addition, the Saudis will be weakened as they lose market share within OPEC, and the economic reemergence of Iran will leave them with greater need for positive, pragmatic relations with Washington and less likely to take actions the United States doesn’t like. We’ll see fragmentation of the Saudi-led Gulf bloc of countries as other Arab monarchs hedge their bets on better commercial relations with Iran.

Finally, the lifting of sanctions will put more money in the pockets of the 75 percent of Iranians who aren’t old enough to remember the revolution. That will go further toward opening Iran to the West than sanctions ever could. It will also help if Iran has more money to spend on supporting Iraqi Shia militias in the fight against ISIS.

Miller: Assuming that you are right, and that Iran will cheat, how could we—perhaps either the P5+1 or the IAEA—effectively punish Iran for violations of the deal without undoing all of the geopolitical progress made during the negotiations? As you said, since sanctions might ultimately end up isolating just the United States from trade with Iran, that might not be the best option. Is there, in your opinion, a better alternative?

Bremmer: Sanctions have been designed to “snap back” into place automatically if Iran is caught cheating. The fact that it’s automatic will make it easier for other countries to impose sanctions again.

That said, it will be easier for Iran to game the inspections process than Americans would like because Americans won’t control it. When there is an argument about whether Iran is cheating, the Russians and Chinese can simply ignore it for the sake of expediency. I don’t believe Iran will act blatantly to develop a nuclear weapons capability, at least not in the early years of this deal. They want the full effect of lifted sanctions to take hold. But there is a lot of gray area. It’s not a tightly crafted deal.

Bremmer: It will certainly take time, because hardliners on both sides will fight any moves toward détente. But I expect that the United States and the Saudis will become more distant. Iran offers the United States so much more, including a consumer market of 80 million people. And in combatting Sunni jihadi groups, ISIS and others, Iran is the more natural ally, even if coordination happens mainly behind the scenes.

Miller: What potential implications could this all have for the future of U.S.-Israeli relations? Is playing nice with Iran going to complicate the United States’ involvement in the Middle East to the point where no U.S. allies or partners will be willing to work with the United States in the future?

Bremmer: Not at all. Where else can Israel turn? The big challenge is Saudi Arabia, which is already working to improve relations with China to better diversify its security and commercial partnerships. Having said that, it’s interesting that the Saudis arrested 400 ISIS members right after the Iran deal was announced. The Saudis have their own reasons for both fearing ISIS and wanting to see the group continue to destabilize the governments of Iraq and Syria, Iran’s allies. But I did see that as a signal to Washington that the Saudis want to tighten, not loosen, relations with the United States.