Will Iran Cheat on the Nuclear Deal? 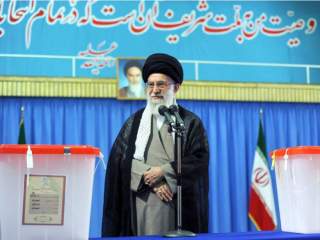 However, to this day no such Christmas card has appeared, which makes Soltanieh's recollections the only source of this highly unusual "fatwa." By contrast, there are several pieces of evidence about Khomeini’s demand to equip Iran with nuclear weapons. The most interesting and most consequential can be found in a letter written by Khomeini on July 16, 1988, four days before his acceptance of the ceasefire demands in the Iran-Iraq war, addressed to Iran's political and military leaders. In this letter, he offered a detailed list of those weapon systems that Iran had to acquire over the course of the next five years in order to be able to retaliate effectively. The list contained not only large amounts of conventional weapons, but also his plea "to create noticeable quantities of laser and atomic weapons, which are the requirements of war in this day and age."

For obvious reasons, Iran kept this letter under wraps for almost two decades. After all, Iran's leadership was bent on making its declared policy seem in perfect harmony with Khomeini's views. The letter, which was meant to be understood as Khomeini's political testament, clearly had its effect. Iran's political elite now knew that, for as long as the Islamic Revolution would serve as Iran's founding myth, the need for nuclear weapons was without any alternative. Iran's nuclear activities, which—in spite of persistent denials—proceed secretly yet visibly, are ample proof.

All this raises the question as to Iran's behaviour vis-à-vis the P5+1. According to the principle of "taqiyya", its application is mandatory if pursuing a certain objective is mandatory. In the context of Khomeini's demand to acquire nuclear weapons, this means that using the "taqiyya" is mandatory. In conclusion: Iran will not only cheat because one is allowed to, but also because one is obliged to use every opportunity to improve one's situation and break out of the restrictions imposed by the agreement.

Iran has already started. On October 10, 2015, Iran tested the medium-range Emad missile, a variant of the well-known Shahab-3. The latter has a range of 2,000 kilometers and a payload of 1,000 kilograms. The new type, however, features a maneuverable warhead.

The test of October 10, 2015, as well as the one conducted at an unspecified date in November, are clear violations of UNSCR 1929, in which the Security Council ruled "that Iran shall not undertake any activity related to ballistic missiles capable of delivering nuclear weapons, including launches using ballistic missile technology…" According to UNSCR 2231, which codifies the nuclear deal, Resolution 1929 continues to apply.

The reactions to these violations were both peculiar and predictable. Iran denied that Shahab-3 was even nuclear-capable—an opinion only few, if any, experts share. Moreover, according to Iran's Foreign Minister Zarif, the missile tests had nothing to do with the nuclear deal. President Obama "solved" the issue with the banal statement that Iran had repeatedly ignored prohibitions regarding missile testing. Moreover, he had his UN Ambassador Samantha Power deliver a tough statement in the Security Council, according to which any further violations would lead to a robust response by the Council.

Barely three months after the signing of the nuclear deal, Iran has violated both UNSC 1929 and 2231, and tried to justify its actions with blatant lies. This is applied “taqiyya” in action.

Hans Rühle is a former Head of the Planning Staff in the German Ministry of Defense. He publishes frequently on security and defense matters.