Will Iran's Human-Rights Failures Bring Down Its Reformer President? 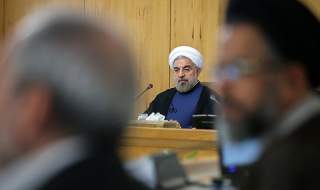 Taking power in 2013, President Hassan Rouhani and his team considered the nuclear pact with the West, referred to in Persian by the acronym Barjam, as a first step in making a fundamental reorientation in Iran’s foreign policy and to normalize Iran’s relations with the outside world. As I explained in my previous analyses, limiting overt kinetic actions by the IRGC and economic recovery are next in importance to the normalization project.

The fourth dimension of Rouhani's normalization project has been improving the state of human rights. Though it is unlikely to be a total spoiler, the human-rights situation may tarnish the normalization project and make it harder for the custodians and their supporters abroad to maintain credibility.

The poor human-rights record of the Islamic Republic has concerned the international community for decades. Iran has been censured by the United States, the European Union and the United Nations. In 1985, Iran was “the fourth country ever in the history of the United Nations” to be placed on the agenda of the General Assembly because of “the severity and the extent of [its] human rights record.”

Over the years, Iran has been accused of a wide range of violations of minority rights, gender rights, gay rights, religious rights, civil right and political rights. The regime has been notorious for its mistreatment and torture of prisoners, extrajudicial killings, excessive use of capital punishment and harsh sentencing guidelines, even for minors. During the tenure of Mahmoud Ahmadinejad, beginning in 2005, Iran’s human-rights record deteriorated badly. Human Rights Watch reported that executions increased from eighty-six in 2005 to 317 in 2007. There were long and arbitrary detentions of “peaceful activists, journalists, students, and human rights defenders,” often charged with “acting against national security.”

The United Nations General Assembly in 2008 voted to expressed “deep concern” for Iran’s human-rights record, particularly cases of torture, the high incidence of executions and juvenile executions, the persecution of women seeking their human rights, discrimination against minorities and attacks on minority groups like Baha’is in state media. Protests over the “stolen election” of 2009 saw scores killed, hundreds arrested (including dozens of opposition leaders) and wholesale suppression of the media.

Despite Rouhani’s promise to improve this lamentable record, things have hardly changed. According to Amnesty International, in 2015 the number of executions reached 977 people, compared to 743 the year before. Other forms of persecution and harassment have also increased. The statistics for the first half of 2016 seem to be even worse. On July 29, the Iran Human Rights Documentation Center and the Abdorrahman Boroumand Foundation, an independent institution monitoring human rights in Iran, reported 386 executions in 2016 so far.

In a telltale sign of oppressive practices, prosecution of so-called lifestyle crimes, including enforcement of the Islamic dress code for women, has increased. There has been a renewed push to enforce a ban on female sports fans in stadiums, an issue that has been debated since 1979. As a rule, intermittent attempts to prevent women from enjoying sports have been a barometer of attitudes toward the “Sharia-compliant lifestyle.”

In a more ominous turn, an increasing number of dual-nationality Iranians have been targeted. At least seven dual citizens have been arrested since October 2015, many of whom stand accused of spying or attempting to undermine the Iranian system. Iranian-American businessman Siamak Namazi and Reza “Robin” Shahini were arrested on suspicion of crimes against the Islamic Republic on October 27, 2015, and July 11, 2016, respectively. A dual British-Iranian citizen, Abdol Rasul Dori Esfahani, a member of Rouhani’s nuclear negotiation team, was arrested for selling economic information to foreign countries. The arrests and trials of these and other dual citizens have attracted intensive attention in the West, and deepened the perception that Iran does not comply with international standards of human rights.

In another high-profile case on August 3, 2016, Iran executed Shahram Amiri, a former nuclear expert who defected to the United States. Under intense pressure, including death threats to his family, Amiri returned to Iran on July 14, 2010, and was sentenced to ten years in prison. But Gholam Hossein Mohseni Ejei, the first deputy of the chief justice of Iran, insisted that Amiri had been sentenced to death by his original court. Analysts have speculated that his unexpected execution, covered extensive by the American media, was yet another ploy of the hardliners to undermine Rouhani’s normalization effort.

The president and his fellow custodians understand that without improving Iran’s human-rights record, the normalization project and Iran’s reintegration into the community of nations will suffer. Rouhani has tried to curb violations of human rights and implied that compliance with the Sharia-imposed lifestyle should not be coerced. On one occasion, Rouhani stated, “You can’t send people to heaven by the whip,” a clear rebuke of the clerical establishment.

On another occasion, a challenge formed over female sports fans in stadiums. Hard-liners argued that letting women into sports stadiums would be altogether anti-Islamic and would promote prostitution. Iravani Religious Seminary teamed up with the radical Basij-affiliated group Ansar-e-Hezbollah to distribute leaflets around Tehran, calling for people to take action to ensure women were kept out of stadiums. Some of the leaflets they distributed warned of a “bloody uprising.”

Unfortunately for the custodians, the spoilers held a virtual control over human-rights issues because of the peculiarities of Iran’s particular political system, known as “negotiated political order.” Following the revolution, the judicial system was restructured to comply with the principles of Sharia, although some civil status were retained. In addition to the network of public courts, both civil and criminal, the Islamic Revolutionary Courts are in charge of special, often ill-defined offenses, such as “crimes against national security” and “crimes that undermine the Islamic Republic.” The Special Clerical Courts are independent of the regular judiciary system and are accountable to the supreme leader alone. The Special Clerical Courts, whose sentence cannot be appealed, serve to prosecute dissident clerics and others who present a theological danger to the regime.

A number of Revolutionary Court justices, including Abolghassem Salavati, Mohammad Moghiseh, Yahya Pirabbasi and Hassan Zareh Dehnavi, have a notorious track record in handing out death sentences or long imprisonment terms. Pirabbasi has been known to take an especially activist stand against human-rights lawyers, students, journalists, and the Christian and Baha’i minorities. Salavati has also been in charge of dual-nationality Iranians.

In yet another peculiarity of the political order, hard-line elites have virtually exclusive control in the extensive surveillance and punishment regimes. Ansar e-Hezbollah, a radical group affiliated with the Basij, has reaffirmed its vow to carry out motorbike patrols in Tehran’s streets to enforce Islamic norms and to “promote virtue and prevent vice.”

On April 18, 2016, Gasht-e Ershad (Guidance Patrols), supported by the Basij militia, the main agency tasked with enforcing Iran’s Islamic code of public conduct, launched a renewed campaign to force observance of Islamic norms of behavior in public or even private spaces. As before, enforcing the hijab is high on their agenda. The Guidance Patrols have the right to admonish suspects, impose fines and make arrests. Basij also is empowered to destroy satellite dishes and receivers as part of a widespread crackdown against devices that they say “deviate morality and culture.”

Not surprisingly, the Rouhani administration’s inability to curb human-rights abuses has generated widespread disappointment both domestically and abroad. The United States Institute for Peace, normally sympathetic to Iranian moderates, issued a report earlier this year entitled “Rouhani Fails on Human Rights Reforms.” Opponents of the regime in Washington who fought hard against the nuclear agreement were even more outspoken. The Tower, a publication of the Israel Project, a pro-Israel advocacy group, has routinely reported information on the dire human-rights record under Rouhani.

There is little doubt that the custodians have been unhappy about Iran’s human-rights record, not least because they expect it to be used in the 2017 presidential election. Having used human rights to discredit the presidency of moderate Mohammed Khatami, hard-liners will not hesitate to do so again. As a matter of fact, it is probably the domestic audience that matters most in this intricate human-rights game. Delegitimizing the custodians in the international arena is, of course, a substantial side benefit for the spoilers. At the same time, a poor human-rights record is not enough to undermine the entire normalization project.

The process of normalization and remigration into the community of nations is intimately bound up with the custodians’ political future. Unlike a state treaty, which is binding, the nuclear accord is a controversial deal that depends on the political health of Rouhani and other custodians. Hard-core spoilers have made clear that they would try to sabotage in any way possible. Should Rouhani lose the ballot in the 2017 presidential election, normalization would be thwarted, but the Barjam is not likely to be abandoned, because most spoilers do not want to see the return of “snap-back” sanctions.

But for those who have hoped that the JCPOA would bring an instant change, this writing offers a somber message. Rouhani and other custodians have gone further than any previous reformers in alternating the system in a meaningful way. But much more time is needed to undermine the parastatal elites from acting as spoilers.