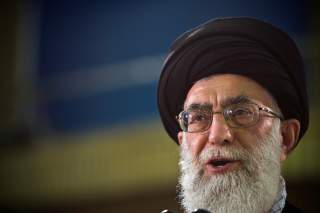 Iranian protesters calling for Supreme Leader Ayatollah Ali Khamenei to step down are crossing new boundaries, placing the future of the system of theocratic government in question.

As the significant demonstrations across the country enter a second week, the focus in the Western media is on the protesters’ economic grievances—the primary reason for the uprising. Although high inflation and unemployment are at the core of their grievances, the protesters are placing blame on Khamenei. Most significantly, many of them were once considered Khamenei loyalists and part of his political base.

Like many other Shia communities across the Middle East, Iranians in large numbers may now be reaching the same conclusion: that having an appointed cleric with unlimited powers running a state is an impediment to democracy, economic prosperity and modernity.

Chants of “down with the dictator” are being heard across Iran since the protests began December 29. Although demonstrators in 2009 and 2010 stomped on photographs of Khamenei, they did not call in such great numbers for his downfall. This public sentiment reflects a well-kept secret in the Islamic republic: many clerics in the religious center of Qom, where some of the protests started, do not agree with the concept of supreme clerical rule, known as velayat-e faqih. This has been true even since the Islamic Revolution of 1979. Inside the seminaries, religious scholars believe such a theocratic system is inherently dysfunctional. They always worried that divine rule by one man—a cleric—would be a contraction to the notions of a republic. And while Westerners and some Arab governments tend to paint Arab Shia communities with a broad brush as Iranian loyalists, the truth is many Shia in the Middle East do not believe in supreme clerical rule either.

So will Khamenei, now in his seventies, prove to be Iran’s last supreme leader? Perhaps, but it is highly unlikely he will be unseated before his death. As one Shia leader in a neighboring country explained, “The calls for Khamenei to leave the scene will not happen anytime soon.”

Among their complaints against Khamenei, the protesters are opposing the millions of dollars that Iran spends each month on military expansionism in the Middle East. They wonder why these vast funds are instead not spent improving Iran’s economy. Khamenei has gradually expanded the power of the Islamic Revolutionary Guard Corps (IRGC) and its militias, which have large footholds in Syria, Yemen and Iraq. Iran also funds Hezbollah in Lebanon. The IRGC is totally under Khamenei’s command, and much of his power (and that of some clerical elites) is derived from the guards. Ayatollah Ruhollah Khomeini created the IRGC shortly after the 1979 Revolution, and tasked it with protecting Iran from its internal and external “enemies.” Within the guards are the basij militia and the Quds Force. The basij historically have crushed domestic uprisings against the regime.

An important difference between the protests now and other large protests in 2009 and 2010 is that those now opposing Khamenei and his policies are no longer primarily the urban, educated elite. Many of the protesters are from rural areas, and presumably members of Iranian society who are more religious than secular. In 2009 and 2010, the opposition, known as the Green Movement, was led by urban elites and started in Tehran. They were protesting what they believed to be a rigged presidential election—not the economy, as is the case now.

President Hassan Rouhani, who walks a fine line between defending the regime while also trying to calm the rioters, acknowledged on Monday that there needs to be more transparency. “People want to talk about economic problems, corruption and lack of transparency in the function of some [state] organs and want the atmosphere to be more open,” he wrote. “The requests and demands of the people should be taken note of.”

Rouhani’s remarks, however, are failing to appease the demonstrators. On January 2, the riots expanded, as did the regime’s violence against protesters.

It is likely that this protest movement will end like others in the past: the regime will imprison and kill its opponents in a short amount of time. But a precedent is being set. For the first time, Iranians are protesting their government’s military expansionism. The U.S. government and Iran’s Arab neighbors continuously criticize Iran’s military activity in Syria, which has kept President Bashar al-Assad in power, and its entrenchment in Iraq. The regime can and does ignore such criticism, but civil unrest could change the calculation over time.

Geneive Abdo is a resident scholar at the Arabia Foundation and the author of The New Sectarianism: The Arab Uprisings and the Rebirth of the Shi’a-Sunni Divide.