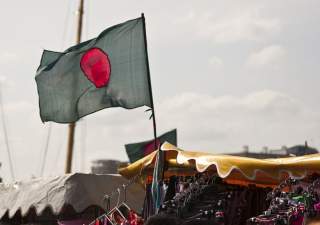 In a National Interest piece last August, we argued that ISIS’s prospects in Bangladesh are relatively limited. Pro-ISIS sentiment is weak, we concluded, and the group will have great difficulty establishing a strong foothold there.

Since the article was published, ISIS has claimed responsibility for a series of deadly attacks in Bangladesh. These include the murder of an Italian and a Japanese expatriate and two separate strikes on Shia Muslims (one on a procession commemorating the Ashura holiday, the other on a mosque). ISIS also took credit for an attack on the Bangladeshi state—a deadly assault on a police checkpoint near Dhaka. According to one count, law enforcement officials in Bangladesh have attributed up to fifteen terror attacks to ISIS.

Amid all these atrocities, last month an article appeared in Dabiq, an ISIS magazine, that vowed to take the fight deep into Bangladesh (which it referred to as Bengal): “The soldiers of the Khilafah will continue to rise and expand in Bengal and their actions will continue,” it warned. Ominously, the article claimed that a new ISIS “regional leader” was in place in Bangladesh, and suggested that local jihadist factions were uniting behind him: “The soldiers of the Khilafah in Bengal . . . unified their ranks, nominated a regional leader . . . and hastened to answer the order from the Islamic State leadership.”

Taking this all into account, one might reasonably conclude that our article back in August was way off the mark.

We beg to differ.

In fact, we predicted that ISIS’s influence in Bangladesh could grow (admittedly, we may have misjudged how quickly this could happen). We pointed to Bangladesh-focused ISIS social media accounts, to several Bangladeshis who allegedly planned to join in Syria and to the arrest of an alleged ISIS recruiter in Bangladesh.

“To successfully forestall possible advances of ISIS into Bangladesh,” we wrote, “the country must be vigilant and proactive in combating any IS attempts” to court members of organizations such as the Jamaat ul-Mujahideen Bangladesh (JMB)—a terror group that launched a series of rapid-fire attacks across Bangladesh back in 2005, but has since been less active in Bangladesh thanks to state crackdowns following the assaults that year.

Unfortunately, there are now signs that ISIS has indeed pursued a courtship with JMB—and perhaps successfully so. The “soldiers of the Khilafah” that the Dabiq article boasts are rallying around ISIS could include JMB fighters demoralized by their weakened state, and eager to be associated with a more dynamic and galvanizing force like ISIS. Tellingly, a series of threats directed at Christians in Bangladesh in recent weeks (mostly priests but also a nun and several aid workers)—claimed to have been issued by both ISIS and JMB.

Another terror group that some analysts believe could be gravitating to the ISIS cause is Ansarullah Bangla Team (ABT), the outfit tied to a vicious and ongoing campaign of violence against secular and atheist bloggers. ABT, however, is ideologically influenced by Al Qaeda, ISIS’s rival. ABT took its name from the Iraq-based Al Qaeda outfit Ansar Ul Islam and is inspired by the teachings of U.S.-born cleric Anwar al-Awlaki, who was a top Al Qaeda official in Yemen before being killed by a drone strike in 2011. In fact, one should not discount the possibility that Al Qaeda—which announced a new South Asia affiliate in 2014—is reaching out to local militants in Bangladesh.

The JMB is seemingly a more desirable partner for ISIS, given its embrace of Salafism and its wider presence in the South Asia region. Last year, a bomb that accidentally exploded in a house in the eastern Indian state of West Bengal was traced to JMB. The organization has also cooperated with the Pakistani terror group Lashkar-e-Taiba.

All this said, it’s still premature to proclaim that ISIS has carved out a formal presence in Bangladesh. Aside from the boasts in the Dabiq article, there’s little evidence of a formal relationship between ISIS central and ISIS-aligned Bangladeshi militants, whether they be JMB members or unaffiliated radicals. Bangladeshi militants carrying out attacks in ISIS’s name is a far cry from taking orders directly from ISIS central. At least for now, ISIS’s inroads into Bangladesh should be associated more with strong brand appeal than with a formal operational presence.

To be sure, in other countries far from the ISIS caliphate in Syria and Iraq, there are indications that such formal links are starting to take shape. In Afghanistan—where several hundred disgruntled Taliban militants have thrown their allegiances to the group—ISIS-aligned commanders interviewed in a recent PBS Frontline documentary claimed that they are in close contact with ISIS officials in the Middle East. The film also reveals that these ISIS-aligned fighters receive propaganda videos directly from ISIS command in the Middle East.

Meanwhile, the November 13 terrorist massacre in Paris shows how homegrown militants in Europe have joined the ISIS cause in the Middle East and returned to wreak havoc at home. This scenario is certainly plausible for Bangladesh, though highly unlikely. The number of Bangladeshis who have gone to the Middle East to fight alongside ISIS is tiny, and particularly compared to the roughly 1,500 from France (according to the Soufan Group, which compiles these figures, a small number of those 1,500 fighters could be aligned with other factions in Syria and Iraq).

Could this current state of affairs conceivably take a turn for the worse? Unfortunately, yes. And it’s the Bangladesh government that could help precipitate the plunge.

To this point, Dhaka’s reaction to the specter of an ISIS presence in the country has been downright dismissive, bordering on nonchalance (even as law enforcement officials have quietly carried out arrests linked to ISIS-claimed attacks). Prime Minister Sheikh Hasina has blamed much of the country’s extremist violence on the political opposition, namely the Jamaat-e-Islaami (JI) and the Bangladesh National Party. This accusation may not be altogether false, given the reported possibility of links between the hardline Islamist JI and the JMB. Still, to seemingly rule out that groups other than Dhaka’s chief political foes are perpetrating Bangladesh’s intensifying extremist violence is naïve at best, and dangerous at worst.

Bangladesh’s political environment is notoriously polarized, and much fuel has been added to the fire in recent months as the government has executed a series of JI leaders for crimes allegedly committed during the 1971 Bangladesh war for independence. The opposition and many outside observers have called this legal process flawed and politically motivated.

In effect, by scapegoating the opposition and intensifying its aggressive marginalization of the opposition, Dhaka could bring about a self-fulfilling prophecy: JI and other anti-government political forces could be radicalized, making them more likely to involve themselves in extremist causes—including by joining terror groups that commit attacks in ISIS’s name. As South Asia analyst Lisa Curtis has noted, extremist forces are all too happy to exploit Bangladesh’s polarized political environment.

Still, ISIS is not the biggest problem for Bangladesh. The biggest problem is an alarming rise in extremist violence more broadly. Debating whether terror attacks are carried out directly by ISIS or simply inspired by ISIS detracts from the chief need of the hour: To stop attacks, many of them not linked to ISIS at all, from happening altogether.

And yet that is one tall order.

Bangladesh is a veritable powder keg, with an ever-more enabling environment for extremism. Consider the political polarization, the murderous exploits of terror groups such as ABT and the resiliency of others like JMB and the considerable popular appeal of JI. As well, there is Hefazat-e-Islam, the largest radical Islamist movement in Bangladesh. In 2013, hundreds of thousands of supporters of this latter group marched peacefully to Dhaka to protest secularism—perhaps foreshadowing the bloody acts of anti-secularism that have been perpetrated by its more violent counterparts in recent months.

The first essential step—one that Washington and other key capitals should impress upon Dhaka as the matter of urgency—is for Bangladesh’s government to acknowledge this state of affairs, to take ownership and responsibility, and not to look for scapegoats.

By merely shrugging off Bangladesh’s alarming levels of extremist violence, Dhaka puts the country in greater peril. And it strengthens the forces that wish to undermine Bangladesh’s founding identity as a pluralistic, secular state.

Michael Kugelman is the senior associate for South Asia at the Woodrow Wilson International Center for Scholars. Atif Jalal Ahmad grew up in Dhaka, Bangladesh and is currently working on a thesis on the origins of corruption in South Asia, specifically Bangladesh.