Will Nagorno-Karabakh’s Fragile Ceasefire Break Down? 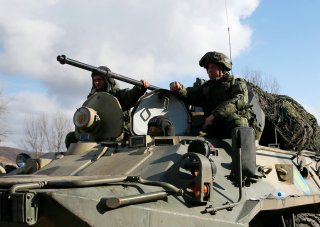 Renewed clashes between Azerbaijani troops and Armenian-backed separatists in the Nagorno-Karabakh region threaten to upend a fragile Russian-brokered ceasefire agreement.

Two soldiers from the breakaway ethnically-Armenian enclave of Nagorno-Karabakh and one Azerbaijani serviceman were killed in skirmishes earlier this week. Baku said it launched a retaliatory campaign, dubbed Operation Revenge, after Armenian militants attacked Azerbaijani troops and tried to seize a territory controlled by Russian peacekeepers.

Azerbaijan’s timing is understandable, say Armenian and Russian observers. Russia has reportedly redeployed some of its veteran Nagorno-Karabakh peacekeepers to Ukraine in recent months, replacing them with fresh conscripts. Moreover, the Kremlin can ill afford to spurn its longstanding allies in the former Soviet sphere at a time when it is being isolated by the West over its invasion of Ukraine. Baku has accurately judged that Moscow is in no position to punish it for ceasefire violations and is using the Ukraine crisis as a window of opportunity to hammer Armenian-backed separatist positions in and around Nagorno-Karabakh, say Azerbaijani president Ilham Aliyev’s detractors.

Azerbaijan denies allegations that it is trying to undermine the 2020 ceasefire agreement, instead accusing “illegal Armenian formations”' of flagrantly violating the truce. Baku says these Armenian formations, described by Azerbaijani media as militants and terrorists, were able to operate from territory controlled by Russian peacekeepers. Armenian prime minister Nikol Pashinyan rebuffed Baku’s claims in a government meeting on Thursday, stating that there are currently no Armenian troops in Nagorno-Karabakh.

Though they agree on little else, both sides have subtly suggested dissatisfaction with the Russian peacekeeping mission. “A number of events that have taken place in Nagorno-Karabakh since 2020, including those in recent days, evoke questions from the Armenian public about the content and nature of the peacekeeping operation in Nagorno-Karabakh. In this context, there is an urgent need to agree on the details of the peacekeeping operation there,” said Pashinyan, referring to Azerbaijan’s alleged ceasefire violations.

The ethnically Armenian enclave of Nagorno-Karabakh, which calls itself the Republic of Artsakh, has previously signaled frustration over Yerevans’s willingness to make concessions to Azerbaijan as part of a larger prospective peace settlement. Reports emerged earlier this year that top Artsakh officials are considering holding a referendum to become part of Russia. There is currently no indication that such an outcome, which would severely jeopardize Russia’s close ties with Azerbaijan, is being seriously considered by the Kremlin.

The Russian Defense Ministry accused Azerbaijan’s military on Thursday of violating the ceasefire agreement near the Sarybaba height in the Shusha district.  “We urge the sides to exercise restraint and comply with the ceasefire regime,” Russia’s Foreign Ministry said on Thursday. “We expect that the existing controversies will be resolved exclusively via diplomatic and political means, with consideration of both sides’ positions and in strict compliance with the statement, adopted by the leaders of Russia, Azerbaijan and Armenia on November 9, 2020.” The European Union joined Moscow in calling on all parties involved to “de-escalate, fully respect the ceasefire and return to the negotiating table to seek negotiated solutions.”

The 2020 ceasefire agreement, brokered by Russia six weeks into the Second Nagorno-Karabakh War, returned the districts surrounding Nagorno-Karabakh under Azerbaijani control and established an ongoing Russian peacekeeping presence in the Lachin corridor linking Armenia with Nagorno-Karabakh. The current tensions center in large part on differing Armenian and Azerbaijani interpretations of the timeline for a new Armenia-Karabakh road to replace the Lachin corridor. Pashinyan has accused Azerbaijan of seeking to “scrap” the ceasefire altogether. “Azerbaijan’s recourse to the escalation serves one purpose: to scrap the regulations set by the [Russian-Armenian-Azerbaijani] statement of November 9, 2020,” he said. Baku insists that it is following all of the agreement’s provisions and has called on Yerevan to do the same.

Azerbaijan’s 2020 war effort was supported and in large part coordinated by Turkey. Azerbaijan’s military imports from Turkey increased exponentially in the months preceding the conflict, according to an analysis conducted by Reuters. Bayraktar TB2 drones, provided in large quantities by Turkey and reportedly operated directly by Turkish servicemen, are widely credited with giving Azerbaijan a battlefield edge. Even as mounting tensions in Nagorno-Karabakh threaten to unravel the truce between Yerevan and Baku, Turkey—which has emerged in prior years as one of Baku’s closest military allies—continues to squeeze Armenia in separate negotiations to normalize diplomatic relations. U.S. secretary of state Antony Blinken told his Turkish counterpart Mevlut Cavusoglu in a phone call on Thursday that Washington stands “ready to engage bilaterally, with likeminded partners, and through our role as an OSCE Minsk Group Co-Chair to facilitate dialogue between Azerbaijan and Armenia and help achieve a long-term political settlement to the conflict,” according to a State Department readout.

Turkish president Recep Tayyip Erdogan met with Vladimir Putin in the Russian resort city of Sochi on Friday. “It should not be ruled out that the presidents will exchange opinions in connection with this aggravation,” said Kremlin spokesman Dmitry Peskov when asked if the two leaders will discuss the Nagorno-Karabakh clashes.