Will Nationalism Become the New Credo of the GOP? 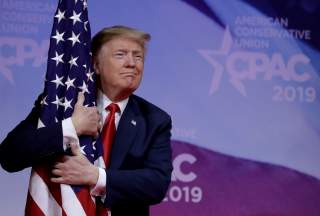 Is it springtime for nationalism?

After being described as a nationalist at the start of his campaign, in October 2018 President Donald Trump embraced the nationalist label at a rally. The purpose of the conference was to take “nationalism” and create a viable political program under its heading. In broad strokes, this program is an industrial policy with state protections for American businesses, a restrictionist immigration policy focused on assimilation, traditional social values, and less democracy promotion in foreign affairs.

National unity and cohesion have never been the American way outside of war and crises, explained Christopher DeMuth, former president of the American Enterprise Institute. DeMuth believes we only have to agree on broad tenets of what it means to be an American.

Yoram Hazony, the lead organizer of the conference and author of The Virtue of Nationalism, described where and when the conservative movement had lost its footing. According to Hazony, when he joined the movement in the 1980s, Irving Kristol taught him that neoconservatism was built on three pillars: religion, nationalism, and economic growth. But that changed at the end of the Cold War, where a world without the Soviet Union allowed people’s minds to drift into idealism. “People who are drunk with power lose touch with reality,” Hazony said.

Now, with a conservatism movement that was more focused on global revolutionary change than conserving homegrown American values, the culture began to shift under people’s feet. “You throw out Christianity, you throw out the Torah, you throw out God, and within two generations people can’t recognize the difference between men and women . . . between a foreigner and a citizen,” warned Hazony.

Speakers promoted a hard break with the old fusionism style of politics, demanding a conservatism untainted by either individualism or universalism. “Today is our Independence Day,” Hazony said, from neoconservatism, new liberalism, libertarianism, or classical liberalism. Faith & Reason Institute Senior Fellow Mary Eberstadt said “Libertarianism, straight-up, is like moonshine,” because it can kill people unprepared for it. DeMuth said the conference’s existence was a rejection of “atomized, free floating individual autonomy.” David Brog, former executive director of Christians United for Israel, said national conservatives need to be in the mold of Alexander Hamilton, Abraham Lincoln, and Theodore Roosevelt, not folk heroes such as Charles Lindbergh.

Tucker Carlson, the media face of the burgeoning nationalist movement, was welcomed with resounding applause. Tucker described how his opinions and his perception of what was possible had changed. “If the Lochness Monster is real, what about the Yeti?” he asked, referring to Trump’s surprise 2016 victory.

“A lot of the people we’ve been told are the good guy, are not, at all. I’ll let you figure out who,” Carlson said about his rethinking post-2016. He referred to Rep. Ilhan Omar (D-MN) as “probably the worst person to ever serve in the Congress.” Omar is one of the four freshmen congresswomen currently in the president’s line-of-sight on Twitter. He also referred to presidential candidate Sen. Elizabeth Warren (D-MA) as “a living tragedy,” since she had written one the best economics books he’s ever read, but whose other idiosyncrasies made her a joke.

While agreeing with other speakers that he “despises” libertarians (said in good humor), Carlson readily admitted that he’ll probably be one again in a decade. “I don’t even have politics, I just have reactions to things,” he said. And that’s how he characterized American politics: an endless cycle of ignoring a problem, and then overcorrecting.

Bolton was greeted with a standing ovation, albeit less enthusiastic than Carlson’s. The crowd loved Carlson, but they respected Bolton, who called them the “friendliest audience I’ve had in a long time.” What followed was an extended question-and-answer session hosted by DeMuth, outlining Bolton’s foreign-policy mindset.

Bolton referenced Edmund Burke multiple times throughout the discussion and said he liked Burke because he tried for “prudence in statecraft.” Bolton claimed that the “isolationist” strain among some conservatives was more appropriate in 1790 than today. He said he wants a foreign policy based on the national interest. “I’m not building a world order. I’m building a world safe for America,” Bolton said, likening himself to Theodore Roosevelt, in contrast to Woodrow Wilson’s internationalism.

Taking the position that the peace dividend after the Cold War had weakened American initiative, Bolton connected this to the rise of China. “China played the WTO [World Trade Organization] like a fiddle for twenty years,” he said. Adding that China abuses the rules of the international trade system, Bolton admitted that an increase in markets had not led to democratization as he and others had predicted in the 1990s.

As a nation we have a right to preclude companies who want to take advantage of economic opportunities in the United States, whether that’s sanctioning who trade with Iran to preventing Huawei from selling to Americans, Bolton explained. He referenced the Vladimir Lenin quote, “the capitalists will sell us the rope with which we will hang them.”

“Not on our watch, by God,” Bolton responded to loud applause. “That’s called taking a hard line.”

Often mischaracterized as a neoconservative, Bolton claimed that, like Burke, he didn’t want to deal with abstraction. He hates “bumper sticker” terms like neoconservative, realist, and liberal internationalist. “My view is very simple: pro-American,” he said. Responding to an audience question later on, he said, “I like to solve problems. I like to tackle challenges to the United States,” instead of “managing” them like a European country might manages them. “If that makes me a hawk, that’s what I am.”

When asked about the process of abandoning international agreements, Bolton grinned: “It’s going great.” Since he was appointed to head the National Security Council, the United States has left the Joint Comprehensive Plan of Action (known popularly as the Iran deal), the Intermediate-Range Nuclear Forces Treaty with Russia, and left the Hanoi summit with North Korea without any written agreement. “I do not believe in supranational government,” he said to applause. “I couldn’t care less what the policy of the United Nations is, explaining that we have our own democratic process to make law. “We don’t need the rest of the world second guessing us.”

“I favor democracy. Everybody got that,” he told the audience when asked about democracy promotion. But Bolton prefers to eschew nation-building abroad, bowing to Burke’s approach that different places at different times require different solutions.

At the conclusion of each of their keynotes, Carlson and Bolton were asked what they thought of sharing a stage at the same conference. The two had previously traded blows about Bolton’s foreign-policy record prior to his appointment to the National Security Council.

Tucker said that while he might disagree with Bolton about everything, he doesn’t hate him or think he’s a bad person. He said he was happy to share a conference with him.

However, when asked the same, Bolton said “I’m delighted to be here after him.” The room was an ominous silence after that, since the crowd was expecting a longer (and more polite) answer. After silence turned to muffled laughs, Bolton said, “That’s called a diplomatic answer.”