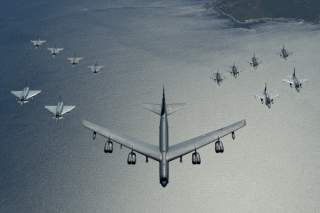 NATO HQ, BRUSSELS & E-4B NATIONAL AIRBORNE OPERATIONS CENTER OVER THE ATLANTIC—U.S. defense officials are continuing to press their European counterparts to increase their military spending to the NATO minimum standard of two percent of gross domestic product. But a number of questions remain about whether the rest of the alliance will follow through on pledges to boost defense outlays. Convincing America’s NATO allies to meet minimum defense spending targets remains a vexing problem and solving it has eluded previous U.S. administrations—Republican and Democratic alike.

Like his predecessors, Defense Secretary Ashton Carter—speaking onboard the Pentagon’s Boeing E-4B National Airborne Operations Center en route to NATO headquarters in Brussels on June 13—told a small group of reporters that he would press his counterparts to boost their defense budgets. “You can bet that a continuing theme here and in Warsaw will be for the need for all countries to meet their pledged two percent, and of course, ideally more,” Carter said. “And in some cases, it is more. But at a minimum, two percent of GDP to defense. And absolutely sure I will be emphasizing that.”

However, many previous outgoing U.S. secretaries of defense have similarly implored members of the NATO alliance to increase their military spending. Each time, that message has fallen upon deaf ears. Despite Washington’s pleas, America’s major European allies have time and again failed to boost their spending to the minimum two percent standard. That has left the United States shouldering an ever greater share of the cost. Indeed, since September 11, 2001, America’s share of NATO’s defense spending has continued to rise even as European spending continued to shrink—despite repeated pledges from alliance members to reverse the trend.

In June 2011, then-Defense Secretary Robert Gates warned that NATO was developing into a two-tier alliance. “In the past, I’ve worried openly about NATO turning into a two-tiered alliance:  Between members who specialize in ‘soft’ humanitarian, development, peacekeeping, and talking tasks, and those conducting the ‘hard’ combat missions.  Between those willing and able to pay the price and bear the burdens of alliance commitments, and those who enjoy the benefits of NATO membership – be they security guarantees or headquarters billets – but don’t want to share the risks and the costs,” Gates said. “This is no longer a hypothetical worry.  We are there today.  And it is unacceptable.” But Gates’ warning was basically ignored by NATO allies.

But while previous promises of increased defense investments by NATO alliance member states have proved to be empty rhetoric, there are some signs of change. Many European states—as of last year—have stopped cutting their defense outlays and have started to slowly boost their spending according to one senior NATO diplomat. The official pointed to Russian actions in Ukraine and the fall of Mosul in Iraq as a turning point for the alliance. Unlike previous pledges to boost spending, at the Wales Summit in 2014, it was heads of state making the promise to boost alliance-wide military spending.

“What’s different about this time is that at Wales—two years ago—for the first time it was heads of state and government. It was Obama and his 27 colleagues who agreed to this goal,” said the senior NATO diplomat. During other previous summits, it was the twenty-eight NATO defense ministers who had made the two-percent of GDP pledge every year. “They were all coming together and gaveling in the decisive agreement that their own budgets should increase, ok. Well, that’s interesting, but that wasn’t decisive. What we got at Wales was the leaders who actually have to manage the defense budget across all the other domestic priorities agreeing that they would move toward two percent.”

The senior NATO diplomat said that the Wales agreement is already producing tangible results—some eighteen NATO members have boosted their spending in real terms. The Wales agreement calls for alliance members to gradually grow their defense budgets over a ten-year span. After more than two decades of defense cut backs, NATO’s defense budgets stopped shrinking last year and have started to increase with 1.5 percent growth per annum. “They did not agree at Wales that they were going to go home and leave the Wales summit and change their national budgets immediately,” the senior NATO diplomat said. “The second thing though, it that really has had an impact…It has turned the corner.”

Nonetheless, the senior NATO diplomat agreed that it would take a very long time to reach two-percent of GDP with a 1.5 percent per annum growth rate. Moreover, not every country has decided to increase spending by 1.5 percent. Only eighteen members of the twenty-eight nation NATO alliance have boosted their spending with only five countries—the United States, United Kingdom, Greece, Poland and Estonia—meeting the two-percent of GDP goal. “Some of the biggest economies are not yet increasing significantly,” the diplomat said. “So we have a lot of work to do. But my observation is for the first time, frankly, in the post-Cold War period since over the last 25 years, you see a change in defense spending inside the NATO allies. And that’s complete attributable the challenges we face.”

Russian moves in Ukraine and elsewhere appear to have galvanized Europe into action. While it is not nearly the peer-level threat that the Soviet Union once represented, western diplomats and defense officials view Russia as a much more unpredictable potential foe confronting NATO. “It's aggressive behavior of a sort that you haven't seen in quite a while. I mean, that's what Crimea represents. And so that stands as a violation of principle that's pretty serious,” Carter said. “There's the fact that Russia still has, and to some extent brandishes it in an unseemly way, the capability to do unspeakable damage to the United States. Now, Moscow has had that for decades now, but it's now accompanied by a level of—I've called it saber rattling in the past, that the leaders of the Soviet Union generally refrained from. So those are at least two worrying things.”

What Carter did not address, however, was the basic question of why the United States should pay to underwrite security on the continent while major European powers—which are more directly threatened by Russia—continue to make only paltry efforts to increase investment in their own defense. Indeed, even the new European commitment to boost spending is a relatively middling effort that will be accomplished over the course of ten years.

This is a potent question being raised by presumptive Republican presidential nominee Donald Trump. President Dwight D. Eisenhower—who once served as NATO’s first Supreme Allied Commander Europe—questioned the return on investment for defense spending for the American public. U.S. foreign policy elites seldom—if ever—explain to the average taxpayer what their return on investment is for underwriting the current liberal-institutional world order.

Though Carter didn’t address what the average the American citizen gains from underwriting the international order, he did express his desire to see America’s NATO allies spend more on defense—and their continued value to the United States. “And as far as the NATO allies are concerned, we wish they would invest more in their capability,” Carter said. “At the same time, they by and large stand for a lot of the same things around the world that the United States does, including confronting terrorism, which is why the counter-ISIL—their role in the counter-ISIL campaign is one of the subjects that we're going to be discussing.” Unfortunately, the notion that the allies will significantly up their contributions may itself be wishful thinking.