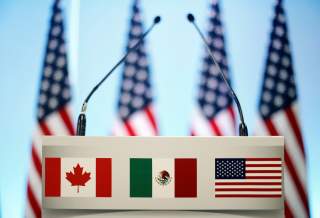 Earlier this month, the International Trade Commission (ITC) issued its assessment of the renegotiated NAFTA. The ITC concluded that the new NAFTA would have a moderately positive impact on the U.S. economy, with GDP increasing by $68.2 billion after six years. Much of this gain was due to “reduced policy uncertainty about digital trade,” as NAFTA’s new rules in this area are supposed to deter burdensome regulations, thereby paving the way for growth.

The reality of international rules on digital trade is likely to be very different, however. It took decades for the equivalent rules on trade in goods to take shape, and while innovations in digital trade governance are important, a burst of growth from the new NAFTA’s digital trade rules is unlikely.

International trade rules related to domestic regulation of goods have been around since the start of the world trading system. When the General Agreement on Tariffs and Trade (GATT) took effect in 1948, one of its core obligations was that governments could not use taxes and regulation to discriminate against foreign goods.

However, there was uncertainty about how such rules would apply. For example, sometimes domestic regulations relied on ostensibly objective criteria, but were actually intended to pursue disguised protectionism. How could the line be drawn between protectionist and legitimate regulations?

In a series of cases over the ensuing years, at the GATT and then the World Trade Organization (WTO), its successor organization, the nuances of this issue were sorted out. With decades of experience and case law in hand, there is now a fair amount of certainty as to how domestic regulations should be constructed to avoid creating protectionist barriers to trade in goods and to operate in accordance with international trade rules.

The ITC expects something similar from the new NAFTA’s rules on digital trade. It says these rules would maintain “current regulatory conditions,” and “deter future trade and investment barriers” in the form of more restrictive regulations and standards. Up to now, the ITC explains, “firms have largely been able to transfer data freely between the countries,” and the new NAFTA commitments provide “assurance to firms that current conditions will be maintained into the future.”

But the absence of any experience with applying these new commitments should give everyone pause. It is true that there are broad obligations in the new NAFTA related to data flows, such as this one: “No Party shall prohibit or restrict the cross-border transfer of information, including personal information, by electronic means if this activity is for the conduct of the business of a covered person.” But there are also multiple exceptions to this obligation: There is a specific exception directly following the cross-border data transfer obligation, for government measures that are “necessary to achieve a legitimate public policy objective”; there are general exceptions for certain designated public policy objectives, which apply to all obligations in the agreement; and there are extremely deferential “security” exceptions that could come up if governments restrict data flows due to concerns about cybersecurity.

The GATT/WTO cases gave governments a chance to flesh out the rules through litigation and gave everyone a better understanding of how the rules applied. But that process has not even begun with digital trade, and at this point we simply do not know how the new NAFTA’s rules on digital trade, and the various exceptions, will affect domestic regulation in this area.

The Trump administration has taken a mixed approach to regulation: It has been hands off in some areas, while being more active in others. But a future Democratic president, such as Sen. Elizabeth Warren, would likely be a lot more active, especially in the tech sector. Would the new NAFTA’s rules on digital trade act as a constraint for any such regulation? It is hard to imagine that they would. A U.S. administration that wanted to regulate digital trade would simply invoke one of the various exceptions, and if the U.S. regulation was nevertheless found to violate the agreement, it is doubtful that the government would change its policies.

That is not to say that digital trade rules in trade agreements have no value, however. We are in the beginning stages of a technological revolution, with wide-ranging implications for personal privacy, business practices, and security matters. Regulation in this area is evolving, and there is a strong possibility that protectionist regulation, excessive regulation, or simply regulations that differ across countries, will interfere with trade. Governments need to use international forums like the new NAFTA to work out the conflicts that result.

But the ITC’s projections are speculative, and the new NAFTA rules are unlikely to lead to an economic boost anytime soon. At the GATT/WTO, governments eventually figured out what the rules meant, and protectionist regulations faced international constraints. Data is more complicated than the average physical product, however, from both a technology and a regulatory perspective, and it could take even longer to sort out where to draw the line between protectionist regulation and legitimate policies. Experience is needed here. Governments will have to register concerns about specific policies, and complaints will have to be filed, in order to establish what exactly the digital trade rules mean and how they constrain domestic regulation of data. With the new NAFTA, this important work has begun, but the multibillion-dollar economic gains may be a way off.