Will Nikki Haley Run for President in 2024? 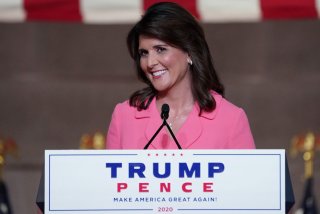 President Donald Trump’s incitement of the riots on the U.S. Capitol building has crumbled his future White House bid, propping up other potential GOP candidates to take the reigns of the party and run for president in 2024.

One prospect, former United Nations ambassador Nikki Haley, has carved a position in the national spotlight, as she reportedly condemned Trump for his behavior following the 2020 presidential election and the Capitol assault, distancing herself from the president’s version of the GOP.

“President Trump has not always chosen the right words,” Haley said during a private appearance at the Republican National Committee’s annual meeting in early January, a source told POLITICO. “He was wrong with his words in Charlottesville, and I told him so at the time. He was badly wrong with his words yesterday. And it wasn’t just his words. His actions since Election Day will be judged harshly by history.”

Haley added that the GOP must “take personal responsibility” for the disruption that’s flooded the party.

She also announced last week that she was launching a conservative political action committee called, the Stand for America PAC, that is laser-focused on the 2022 midterms and vowed to “recruit, advise, train and financially support strong conservatives to run in key House and Senate races to take back control of both chambers”—an initiative that ballooned current speculation of a Haley 2024 presidential run. The PAC’s website, however, offers no support for Trump, Haley’s former boss, despite serving for his administration for roughly two years.

But a spokesperson for Haley’s team affirmed that the sole purpose of the PAC’s effort is to shift both chambers red in next year’s election.

“Haley frequently and proudly mentions her work alongside President Trump in speeches and writings. The purpose of SFA PAC is to support Republicans in the 2022 midterm elections,” the spokesperson told Axios.

Haley has been seen as a rising political figure for the Republican Party since 2010 when she was elected governor of South Carolina at the age of thirty-eight, becoming the first Indian-American to hold the office in the state and swiftly won reelection in 2014.

Experts suggested that GOP candidates like Haley are “best positioned” to win the 2024 nomination and potentially the general election.

Dr. Patrick Fisher, a political science professor at Seton Hall University, said that there will be three types of potential 2024 Republican presidential candidates: the “Always Trumpers,” the “Never Trumpers,” and the “Kinda Sorta Trumpers.”

Dubbed as the “Kinda Sorta Trumpers,” Fisher said, “Nikki Haley falls into this camp. Those in this camp will embrace Trumpism when it is useful but all try to appeal to moderates to broaden the GOP base,” adding that another example would be Sen. Marco Rubio (R-Fla.)

“Right now, I would say that this camp is best positioned to win both the nomination as well as [the] general election in 2024,” Fisher said.

Potential candidates like Republican Sens. Ted Cruz (Texas) and Josh Hawley (Mo.) would be classified as the “Always Trumpers,” since they’ve remained ardent loyalists to the president and have been reluctant to criticize the Capitol attacks committed by Trump’s mob-like supporters.

And the “Never Trumpers,” like Sen. Mitt Romney (Utah) and Maryland Gov. Larry Hogan, are those who have thoroughly distanced themselves from Trump and his ideals, pushing for a revised party.

“The Always Trumpers will have a very hard [time] winning the general election, and I would be very surprised if a Never Trumper could win the GOP nomination,” Fisher said.

While Haley only rallied five percent of support from respondents in a Morning Consult-POLITICO 2024 Republican presidential primary poll released last week, Haley’s backing didn’t fall far behind other prominent rumored candidates like Donald Trump Jr., Cruz and Romney. But their support was well below Trump and Vice President Mike Pence’s, as they were the only candidates to achieve double-digit margins.