Will North Korea Give Us Anything for a Peace Treaty? 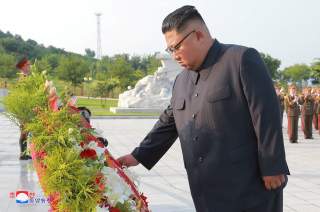 The latest rumor this summer about the inter-Korean détente process is that a peace treaty is under clandestine discussion. The four main players—the two Koreas, China, and the United States—are apparently considering how to formally end the Korean War. The hostilities of the Korean War, 1950–53, halted with an armistice. No formal conclusion was ever signed. The liberal government of current South Korean president Moon Jae-in has sought significant outreach to the North. Formally ending the war is a part of that.

There are some challenging hurdles though. Legally, a peace treaty is a thorny question. South Korea did not sign the armistice, and the United Nations, represented by U.S. Gen. Mark Clark, signed for the coalition which fought the war. It is unclear if the United States could sign alone; if the UN would need to sign in some way; if other UN coalition members would need to agree; if China, which technically sent “volunteers” to fight, would sign at all. As a result, there has long been talk of notions like a “war-ending statement” or “peace regime,” rather than a peace treaty itself. The legal debate here is tangled.

More importantly though, of course, is the political balance of forces, which is favorable to a treaty for the first time ever. China is now a major player in the affairs of the peninsula. Even if it does not sign a formal statement, its assent to any new order on the peninsula is required. China clearly wants a peace statement to reduce the likelihood of conflict on the peninsula. North Korea has long sought a peace treaty as recognition of its right to exist, while the United States and South Korea have resisted for that very reason.

A peace treaty is another step on the road to recognition of North Korea, legitimizing its existence, despite being an orwellian tyranny, and formalizing the arbitrary division of the peninsula. Importantly now, both the South Korean and American leaders no longer seem to care about this. President Moon seems prepared to recognize North Korea as a distinct Korean state apart from the South in the interest of détente. The South Korea left has long thought that the United States is as much responsible for the division as North Korea. If peace means the United States leaves South Korea, then reconciliation and eventual unification will follow. The United States has long resisted this logic, but under President Donald Trump, the United States no longer cares about this worry. Trump’s primary interest in Korea is the perception of a political victory for domestic purposes. He cares little for the U.S. position in Asia or U.S. alliances generally. He has very publicly talked down the U.S.-South Korean alliance.

So there is now a unique window of opportunity for Moon to push a treaty through. But, as with so much else in this year’s very rapid détente, it is not clear why the democratic camp would agree to this new arrangement. The current lack of a peace treaty does not mean that Korea is on the cusp of war. This is common, but false, cliché in western reporting from Korea. Peace in Korea is quite stable. The deterrence and containment of North Korea by the United States and South Korea has worked for decades. If anything, it is North Korea which has routinely violated the peace, with attacks along the land and sea border going back decades. So a peace treaty is not actually about peace.

Rather the treaty is about recognition. A formal treaty with North Korea’s signature next to that of the United States and South Korea would be one more step on the way to the two-state solution North Korea has long sought. The more we, the democratic states, legally interact with North Korea, the more like a normal, legitimate state participant in the international community it becomes. This of course is the whole point of its diplomacy this year. Now that North Korea is safe behind its nuclear deterrent shield, it can bargain and deal to end its pariah status.

There is of course a moral argument against this. Many hawks and human-rights advocates would arguing that legitimizing a totalitarian tyranny this awful is an error. North Korea is not a run-of-the-mill dictatorship, of course, like Saddam Hussein’s Iraq and Bashar al-Assad’s Syria. It is far worse, literally akin to 1984. But even if one is willing to accept that dealing with the actuality of North Korea is simply what we must do in the real world, there is still the missed opportunity of giving up a treaty—which we do not need and they want very much—for nothing.

This problem has stalked this whole year’s détente process. Again and again, the United States and South Korea have given North Korea important prestige gains—two inter-Korean summits and one POTUS summit—for nothing. In his press conference after the Singapore summit with North Korean leader Kim Jong-un, Trump even publicly attacked the United States’ South Korean ally as a free-rider.At some point this year’s détente need to result in serious North Korean concessions. We can give things to North Korea, but not indefinitely if we do not receive anything in return. And these high-profile meetings and statements are concessions in themselves to the North. Status gains—the global recognition which flows from shaking POTUS’ hand—is just as important to the North as material gains like reducing U.S. troop numbers in South Korea. Yet we are not getting much back from the North for these status concessions, and the peace-treaty debate looks to the be same. It is unfortunate enough that we are on the cusp of recognizing such a harsh regime. Can we at least not get some real concessions from them first?