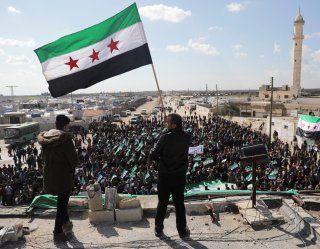 After four years of attempted disengagement under President Donald Trump, does the coming transition to a Biden administration herald a return to a maximum-pressure strategy against the Assad government?

In a May 2020 interview, Joe Biden’s Secretary of State nominee Antony Blinken conceded that the Obama administration’s Syria policy had “failed.” Asked about Biden’s approach to Syria, Blinken responded, “In the last administration [one] has to acknowledge that we failed not for want of trying, but we failed. We failed to prevent a horrific loss of life. We failed to prevent massive displacement of people internally in Syria and, of course, externally as refugees. And it’s something that I will take with me for the rest of my days. It's something that I feel very strongly.”

But what, exactly, was the policy failure on the part of the Obama administration, and what lessons does it bode for the future Secretary of State? What could the Obama White House have done differently to, in Blinken’s words, “effectuate some more positive outcome” in Syria? Blinken, a veteran diplomat and senior national security official in the Obama administration, provides no clear answers. In an older interview, Blinken seemed to place the blame on a raft of external forces: “I think there’s plenty of blame to go around, starting with the Syrians themselves, starting with Iran and Russia and the other patrons of the [Assad] regime, starting with all of the Arab states and other neighboring states. But, Blinken added, “we have a responsibility too,” bemoaning the “the overhang of the Iraq War” and the “difficult intervention in Libya” to explain the lack of domestic enthusiasm for U.S. military intervention in the Syrian Civil War.

Blinken seemingly regrets the outcome, but not the Obama administration’s core strategy of leveraging international and military pressure to negotiate Syrian leader Bashar al-Assad’s removal from power. As late as October 2015, Blinken affirmed the Obama administration’s support for regime change in Syria: “Russia now has an incentive and more influence to move Assad and the regime towards a transition. There is a recognition on all sides that there is no military solution in Syria, that is a recognition that is now growing on the Russians.” Asked to clarify if Assad’s departure is a prerequisite for substantive negotiations, Blinken responded, “not a prerequisite, but the process that will be triggered must lead to Assad’s departure.”

Five years later, there is a growing recognition among the Washington foreign policy establishment that there is no clear policy pathway for removing Assad. Moreover, the ongoing conflict in Syria is unlikely to be a top foreign policy priority for the incoming administration. Assad has steadily strengthened his grip on power with Russian support, the “moderate” Syrian opposition touted by the Obama administration is a political nonfactor in 2020, and the growing threat of ISIS expansion on Syrian territory has been successfully contained in prior years.

So, what now? Recognition of the Assad government is, according to Blinken, still out of the question. “It is virtually impossible for me to imagine that,” he said when asked if a Biden administration could normalize relations with the Assad regime.

Though the prospects of Libyan-style regime change in Syria are exceedingly dim, there are indications that a Biden administration will be interested in carrying on a maximum-pressure strategy against Assad. Blinken laid out the contours of this approach in a 2017 New York Times op-ed: “Now, the [Trump] administration has leverage it should test with the Assad regime and Russia to restrain Syria’s air force, stop any use of chemical or biological weapons, implement an effective cease-fire in Syria’s civil war and even move toward a negotiated transition of power—goals that eluded the Obama administration.” The second plank of Blinken’s proposed Syria strategy is to use Assad as a proxy for the broader purpose of confronting Russia: “The administration should make clear to Moscow that it will hold it accountable for Mr. Assad’s actions going forward, rally others to do the same and launch more strikes if necessary,” he said, calling for the imposition of costs on Russian President Vladimir Putin for his continued military and political support of the Assad government.

A Biden White House will not only maintain the Trump administration’s sanctions on Assad but possibly expand them. This approach includes, almost certainly, maintaining an active military presence in Syria to support the Kurds as a permanent wedge against both Assad and the Kremlin. A Biden administration is also likely to play a more active role in the ongoing reconstruction of Syria, possibly pushing for political reforms that would give anti-Assad factions a protected voice in Syrian civic society.

The president-elect seemingly acknowledged at a 2018 Council on Foreign Relations event that Obama’s efforts to marshal the Kremlin’s support for a “transition of power” away from Assad have borne little fruit, instead floating what appears to be a “spheres of influence” arrangement with Moscow: “So I think—but there are ways in which we could, in fact, work with Russia to essentially take parts of the country—that’s going to be a divided country a long time . . . there is no uniting principle in Syria, in my view. There is none,” Biden said. “And so I could see where you could work out a place where there was essentially safe harbor for certain parts of that country, and you could drastically reduce the number of people being displaced and killed. We tried that as well, and they didn’t play fair there.”

The incoming administration has yet to outline its strategic endgame for the Assad government, but one thing is clear: maximum pressure—and with it, potential expansion of the U.S. military presence in Syria—is here to stay.