Will Obama Dump the "Don't Do Stupid Stuff" Doctrine? 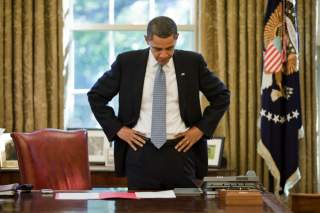 There is a long history of presidents reversing their foreign policies towards the end of their tenures in the White House—sometimes in dramatic fashion. Some such reversals have been responses to changes in the international environment. At other times, they have been caused by shifts in domestic politics. Whatever their reasons, however, it is not unusual for presidents to switch gears over foreign policy in the face of changing circumstances. This history shows that it is not too late for President Obama to put in place a new strategy for dealing with the manifold challenges that presently face America on the world stage, should he decide to do so. History also provides some clues as to whether such an overhaul of foreign policy is likely to occur over the next eighteen months.

The “Reagan Reversal” is perhaps the most celebrated example of a president appearing to change strategy midway through his term in office. President Reagan’s first four years in office, of course, were marked by a dramatic increase in defense expenditure, which bankrolled an expansion of U.S. conventional and nuclear forces and underwrote a new willingness to resist communism in the Third World. Yet the militancy of Reagan’s first term contrasts with the relatively conciliatory tone towards the Soviet Union that prevailed between 1985 and 1989: while it would be wrong to overstate the case, the Reagan administration in its latter years did place a markedly greater emphasis on diplomacy and negotiation with Moscow than it previously had done—a material shift in approach that did not go unnoticed at the time, and is credited with facilitating the peaceful end to the Cold War that occurred in the years following Reagan’s departure from the White House.

The Reagan administration’s initial enthusiasm for militaristic policies had, in part, been a political choice—a move designed to favorably juxtapose Reagan and the Republican Party with the supposed impotence of the Carter years. Yet few recognize that Carter himself presided over a significant reversal in foreign policy while in office. Initially responsible for cutting the defense budget and refocusing U.S. foreign policy on North-South relations and human rights, Carter embraced a return to militarism during the twilight of this presidency. In January 1980, he promulgated the Carter Doctrine, a bold statement made in response to the Soviet invasion of Afghanistan that effectively declared the Persian Gulf as firmly within the U.S. sphere of influence. The Rapid Defense Force was conceived as a credible military means of enforcing the Doctrine, while the controversial PD-59 was issued to overhaul prevailing nuclear strategy. All of this was matched by a substantial increase in defense spending.

Harry Truman changed his foreign policy more than once during tempestuous times. Initially keen on drawing down U.S. forces in Europe and Asia once World War II had been won, the president was not slow to extend commitments to America’s wartime allies once relations with the Soviet Union worsened between 1945 and 1949. Upon becoming president, Truman had been convinced of the need to severely punish Germany and Japan for their wartime policies, yet he had put in place much more lenient—friendly, even—approaches to both countries by the time he left office. Overall, Truman’s most important legacy as president—the construction and implementation of the strategy of containment vis-à-vis the Soviets—stands in pronounced contrast to the president’s earlier resolve to return the United States to normalcy.

To be sure, there are presidents who have resisted calls for change while in office. Both Dwight Eisenhower and George H.W. Bush, for example, adhered to fairly consistent foreign-policy blueprints, despite major international challenges and domestic dissent towards their steady approaches. As President Obama faces intensifying criticism over his handling of crises in Iraq, Syria and Ukraine and his preparation for future challenges in regions such as East Asia, the question that thus presidents itself is this: will Obama adapt or stay the course?

Critics argue that enough has happened since 2008 to warrant a dramatic overhaul in American foreign policy. The experience of former occupants of the White House suggests that it is not too late for Obama to respond to such criticism—if he so chooses. All the signs, however, appear to be that he will not. Heading a party and leading a country that shows little appetite for more overseas engagement, Obama seems likely to stick to his current approach of avoiding “stupid stuff,” rather than accepting the risks associated with a brand new modus operandi. Expect no Obama Reversal.