Will Pompeo Turn the State Department Around? 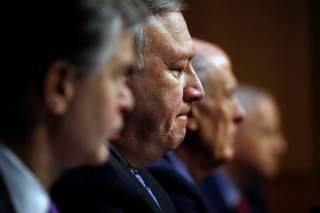 In the professional abattoir that is the Trump administration, almost every cabinet member has been rumored to be in the president’s gunsights. Secretary of State Rex Tillerson wasn't even back at the top of the batting order, but he’s the first top man to go.

Before turning to the question of Tillerson himself, Washington’s rumor mill deserves a word. We have heard frenzied rumors about almost everyone’s ouster from the get-go. Last week (seriously), H. R. McMaster was out, being replaced by a Ford exec. Before that, Chief of Staff John Kelly was out. We heard the president wished Jared would go. That the Secretary of the Interior was out. Also VA sec. Some others. To be sure, at least one of the rumors must be true. Even a blind hog is right twice a day. Or something. But most of these stories are reporters talking to agitators, ax grinders and other reporters. They are not talking to people who know anything, which in this administration, consists of Donald J. Trump. But back to Tillerson.

The former Exxon mogul was the great hope of the establishment in the age of Trump. To say he disappointed is an understatement. It was not that Tillerson was too Trumpy. It was that he was not what he promised to be: a manager. His stewardship of the State Department has been a fiasco from soup to nuts. Insular and ignorant, Tillerson refused to fill positions, refused to manage foreign policy, and frankly, refused to do his job. His sole constituent in the administration has been Secretary of Defense James Mattis, who was apparently unable to protect his pal. Nor was Tillerson a “moderate” as deranged anti-Trumpers are now suggesting. Does a moderate cut State by 30 percent? Not have ambassadors in Saudi or South Korea? Refuse to meet staff? Skip multinational meetings on counterterrorism? Ignore Iraq?

Then there is Mike Pompeo. The Director of Central Intelligence has been a competent leader at the Agency, and competence is sorely missed at State. He respects the rank and file. He is a hardliner on North Korea, like Tillerson, but unlike Tillerson, may actually want someone to work that file at State. For those who suggested the firing of Tillerson was related to his tough stand on Russia (ahem, what?), Pompeo is an actual Putin skeptic. And oddly, for those who suggest that now is a terrible moment to can the Secretary of State (who has done next to nothing on Asia), who better to slot in than someone who knows all too well what the intel says about North Korea and Kim Jong-un.

The tasks ahead for Pompeo, if confirmed, to restore the State Department are clear:

1 - People. Appoint some people. There are dozens of empty positions at State. Almost every key position.

2 - Leadership. Tillerson has led with a tiny inner circle that could easily fit in the proverbial phone-booth. He doesn't meet the assistant secretaries or undersecretaries, such as exist. Pompeo must expand his circle and lead every day.

3 - Policy. The State Department has been MIA under this administration except insofar as Tillerson has worked to derail the National Security Council. There are good people, political and career, who deserve respect and should be allowed to do their jobs. Recent career employees who have fled could be allowed back to help do the work of the nation. Foreign policy is not all war and peace, and requires a professional and experienced team. Threats are growing, whether from Russia, Iran, China or Al Qaeda and ISIS. The nation cannot afford to have a Secretary of State who is AWOL every single day.

4 - Trust. If the president trusts Pompeo, all to the good. But it will also be Pompeo’s job to restore the trust of people at State in their leadership.

Danielle Pletka is the Senior Vice President for Foreign and Defense Policy Studies at the American Enterprise Institute.

This is an expanded version of an article that appeared earlier on the AEIdeas blog.