Will Republicans Keep Playing Russian Roulette with the Debt Ceiling? 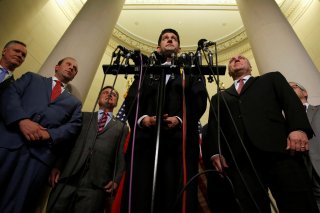 More than seven months into the 115th Congress, Republican majorities in both the House of Representatives and the Senate have been notably dysfunctional. President Donald Trump and his White House staff are in disarray. The budget process is way behind schedule, and every day brings the United States closer to what should be the unthinkable: defaulting on the national debt by failing to raise the debt ceiling.

While raising the debt ceiling should be routine, the current mix of political dysfunction and administrative mismanagement could signal trouble ahead with dire consequences. Treasury Secretary Steven Mnuchin says the debt ceiling must be increased by September 29. But Congress is in recess until after Labor Day and President Trump has left town for a seventeen-day golf getaway in New Jersey, leaving only twelve joint days where both the House and Senate are in session to address the issue.

The debt ceiling is like a gun pointed at the entire economy, and this has become an increasingly dangerous game of Russian Roulette. This is not a game the United States should play—if it ever was—and the time has come to repeal the debt ceiling for good.

When Congress makes tax and budget decisions resulting in spending greater than revenue, it must make up the difference through borrowing. The debt ceiling is a statutory limit on the maximum amount the federal government can borrow. It is an ineffective tool for fiscal restraint since Congress has already committed to spending the money. Without the ability to borrow, the U.S. government would not have sufficient funds to pay its obligations. This would result in a default, forcing the government to renege on some of its commitments made in law, such as salaries for military and civilian personnel, Social Security benefits, and interest payments on treasury bonds.

The United States has never defaulted on its financial obligations, and the repercussions would be severe. According to a Treasury Department report, a default may lead to a crisis on par or worse than the Great Recession. It would become more difficult to access credit, and the value of the dollar would fall.

A default could cause a sharp spike in interest rates, due to increased risk of investing in U.S. government-backed financial instruments. Homeowners would see housing values plummet. If interest rates increased by five percent, for example, the median home price could decrease by more than $70,000.

Under President Barack Obama, Republicans in Congress attempted to use the debt ceiling to extract policy or budgetary concessions, which took the country dangerously close to default. In theory, raising the debt ceiling today should be a smoother political process, since Republicans control the House, Senate and White House. Yet, it seems some members of the ultraconservative House Freedom Caucus want to deploy similar tactics to force through deep spending cuts. If these members on the far right take this approach again, then they will essentially be holding the Republican Party—and the full faith and credit of the United States—hostage, and few good things ever come from taking yourself hostage.

The White House has spent the summer offering mixed messages, with Secretary Mnuchin supporting a clean debt-ceiling increase, while former Freedom Caucus member and current Office of Management and Budget Director Mick Mulvaney initially called for a debt ceiling increase tied to spending cuts. Secretary Mnuchin seems to have the Trump administration united behind a clean debt limit increase for now, but President Trump routinely undercuts his own staff and remains a wildcard in this process. Candidate Trump floated an incoherent idea about using a default as a strategic advantage; President Trump tweeted a demand for the Senate to take another vote on repealing the ACA, “before voting on any other bill!”

In this environment, especially, it is more important than ever that we end the debt ceiling once and for all. The debt ceiling has always been an issue of our own making. Congress and the Trump administration have plenty of other issues as it is, and the last thing the United States needs right now is to blunder into a default due to reckless political brinksmanship and administrative confusion.

Andrew Schwartz is a policy analyst at the Center for American Progress. Harry Stein is the director of fiscal policy at the center.