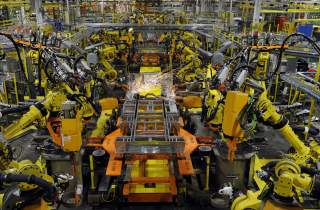 A REVOLUTION is occurring at the intersection of technology and labor. Change will be uneven across sectors and across the globe. But it will come. Technological advances in artificial intelligence (AI), autonomy and robotics will fuel these changes, aided by the synergistic effects of the Internet of Things (IOT), three-dimensional (3D) printing and big data sciences.

The development of these technologies brings the promise of higher productivity (and, with it, economic growth), increased efficiencies, safety and convenience. However, it also raises difficult questions about the broader impact of automation on jobs, skills, wages and the nature of work itself.

The effect on labor will undoubtedly be disconcerting for many as jobs will be eliminated or greatly evolve. Some “traditional” jobs will become obsolete or numbers of workers in them reduced as technology further encroaches into the workplace. In addition, workplace productivity will increase, while the human labor demands will be dramatically decreased.

Some futurists, such as Homi Kharas at the Brookings Institution, predict that a child born in 2020 might never have a job. Others talk of different types of jobs—nontraditional by today’s standards—where workers will work on a contingent basis. Examples of early adapters in this type of work are Uber and TaskRabbit, where workers set their own schedules and decide how many hours to work. A World Economic Forum report, meanwhile, estimates that “65% of children entering primary school today will ultimately end up working in completely new job types that don’t yet exist.”

While some question the scale and pace of the changes, near-unanimous agreement exists that whatever portion of the workforce remains will require new skills. Thinking will likely replace doing for much of the workforce. Positions involving routine or repetitive skills will likely be the first to be eliminated. A premium will likely be placed on those workers with specialized skills, particularly in the science, technology, engineering and mathematical (STEM) disciplines.

If history is any indication, fewer people will be involved in traditional work: agriculture, industry and services. So what will all these people be doing? And what, then, is the future of work?

THE CHANGES underway in labor markets are breathtaking, but not unprecedented. Throughout recorded history, an inverse relationship has existed between technology and labor—as the use of technology has increased, labor demands have decreased, productivity has increased and restructuring of the labor markets has resulted.

Every advancement in human history has sprung from the desires to acquire safety and security, to learn more about the world and to improve human welfare. As humans continued to advance and build societies, functioning economies took root, and with them the idea of work. Throughout, even when disruptive technologies have been introduced, societies have found ways to adapt.

During the Industrial Revolution, from 1750 to 1900, technological developments such as the steam engine, telephone and railroads began to transform mostly agrarian societies towards greater industrialization. From 1900 to 1950, electricity and mass production led to greater productivity and more rapid technological advances. The development of computers and information technology (IT) since the middle of the twentieth century ushered in the Information Age. In the seventy-year period from 1900 to 1969, humankind went from horse travel to landing a man on the moon. With each of these transitions, an accompanying increased productivity in agriculture, industry and the sharing of information resulted.

The service sector has continued to grow steadily from 1840 to 2010 from approximately 20 percent to almost 80 percent of the U.S. labor market. However, it is unlikely that services can continue to experience this pace of growth as a percentage of the U.S. economy, as that would imply continued complementary reductions in agriculture and industry.

Factors influencing the decline in industrial labor requirements vary by sector, but some common themes have emerged. Efficiencies have been gained through the development of automation and robotics. Efficiencies have also been gained through optimization efforts, such as lean manufacturing techniques, which have further reduced demand for workers.

In manufacturing in particular, economic restructuring is making the need for large labor pools of highly specialized craftsmen obsolete. Instead, the combination of technology and specialized techniques has allowed smaller boutique manufacturing operations to flourish. These operations offer increases in speed and precision while lowering labor costs.

While it is unlikely that the industrial sector will experience the same percentage of reduction as agriculture did, a large rebound in the manufacturing labor market also seems unlikely. Under certain conditions, some industry could return to the U.S. economy, but certainly not the large-scale, labor-intensive manufacturing plants of the last century.

Although labor trends have seen a reduction in the percentage of the population in agriculture and industry, production and output are at their highest levels. For example, according to data from Pew Research, employment in manufacturing was 17.5 million in 1987 and 12.4 in June 2017, approximately a 30 percent reduction. During that same period, the seasonally adjusted real output index grew from 69.79 to 129.26, an increase of 85 percent.

The service sector has been on a steady climb since the 1800s, but can this growth continue? History suggests that would be very unlikely. Just as in agriculture and industry, efficiencies through technology are likely to be identified, labor markets altered and the service workforce consequently shrunk. The leading edge of these changes can be seen with the growth of companies such as Amazon and Uber that are disrupting labor markets.

A RESTRUCTURING of the global economy fueled by changes in technological capabilities is underway. These changes will result in a complementary restructuring of entire sectors of the global economy. They will be felt most dramatically in the United States and other advanced nations in the coming decades. While the benefits of these shifts may not be seen in developing nations for some time, the negative effects of this economic restructuring will be felt almost immediately.

Technological advances in artificial intelligence, autonomy and robotics, and enabling technologies such as IOT, 3D printing and big-data science, will alter fundamental relationships—and ultimately the cost-benefit calculus—between technology and labor costs, global transportation network costs, and consumer costs for goods and services. Technology will be used to offset requirements for human labor. Global transportation networks are likely to contract, as advanced manufacturing techniques and 3D printing will mean goods can be more efficiently produced in local or even neighborhood manufacturing centers. Lower labor costs could translate to lower consumer prices, although lower cost to market may imply higher profits rather than savings for the individual consumer.

In examining the future of work, dire predictions have become commonplace. Books such as Humans Need Not Apply and Rise of the Robots chronicle a jobless future in which increasingly traditional human tasks are outsourced to technology. Given these predictions, it seems prudent to consider the extent to which existing jobs can be automated.

Consider automobiles: autonomous-vehicle technology could dramatically alter our interactions with cars. One account in the San Francisco Chronicle optimistically predicts autonomous vehicles will “prevent accidents, ease traffic and bring newfound mobility to the elderly and the disabled.” It could also save 1.2 million lives annually—forty thousand in the United States alone—from losses due to vehicle accidents.

But autonomous vehicles could prove highly disruptive as well, altering entire industries. Long-haul trucking is a prime example, ripe for an infusion of autonomous technology and a move away from human drivers. Imagine the benefits in shipment times and costs savings for autonomous fleets of trucks that could drive twenty-four hours a day, not requiring rest for the drivers. An important secondary benefit would be increased highway safety.