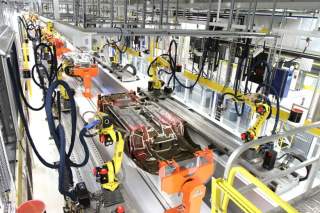 Estimates say that 3-D printing could be used for up to 10 percent of all consumer products and be used wholly or partially for half of all direct product manufacturing within a decade. Traditional manufacturing processes will probably still be more cost-effective for the vast majority of products, but 3-D printing is poised to take the lead in more complex, low-volume and highly tailored products.

AS FANTASTIC as these two examples of manufacturing ingenuity and innovation are, it may not immediately be clear why they are “disruptive” to traditional manufacturing, or why such technologies could spell trouble for East Asia’s export-oriented growth strategy. Even if these technologies fulfill the hopes placed on them, couldn’t the low- and middle-income East Asian countries use them to accelerate their development? After all, China is emerging as the largest purchaser of industrial robots in the world, with one in every five sold in 2013 being bought by a China-based firm.

The answer comes down to what could be the radical and game-changing erosion of East Asia’s cost advantage in export manufacturing. The cost of production is the sum of capital, labor and land costs. The lower cost of workers and land on which foreign firms locate manufacturing plants has been a five-decade boon for East Asia. For export-manufacturing giants such as China, rising labor and land costs have been offset by the economies of scale that China-based operations can achieve. In other words, in traditional manufacturing, the cost per unit of producing one product decreases as fixed costs are spread out over an increasing number of units produced.

As ever-improving advanced robots become cheaper to buy and install, the traditional manufacturing cost equation will be fundamentally altered. For one, the greater the automation, the less relevant labor costs become, especially if one considers that robots (unlike human workers) can, in principle, work twenty-four hours a day for little additional variable cost. In fact, once a firm has committed to the sunk fixed cost of automation equipment in a manufacturing plant, the unit cost of a manufactured product made by a robot decreases with every additional product made. If this is the case, then it will eventually be far less attractive on a cost basis for advanced-economy firms to locate manufacturing operations in low- and middle-income countries.

To offer one case study, consider the Taiwanese company Foxconn, which makes products for a number of leading Western brands such as Apple in its major manufacturing plants in China. Foxconn located operations in places like Shenzhen because labor was much cheaper in the Chinese province. Employing more than one million workers, Foxconn is now replacing many of them with a growing army of robots. Some reports suggest that a $20,000 robot can assemble thirty thousand iPhones in one year—a cost of sixty-six cents per unit assembled. That number should be similar whether the robot is located in Shenzhen or Detroit. For Foxconn, or others like it, there will be less reason to build future automated plants in low-income countries like China.

Indeed, global brands consistently name supply-chain risk as one of their major ongoing concerns when it comes to manufacturing. If a product is designed in America and sources the most valuable components from other advanced economies, using robots to assemble the product in developed countries with reliable regulatory, legal and judicial institutions is a far less risky option than if the automated plant were located in China or Indonesia—developing countries with riskier environments and weaker commercial institutions. Bear in mind that while China emerged as the largest purchaser of robots in 2013, the majority of purchases of advanced robotics were by foreign-owned firms headquartered in advanced economies with manufacturing operations in China. It seems only a matter of time before an increasing number of them will prefer to build automated firms in advanced economies to reduce the risks inherent in less developed countries with more opaque and unpredictable political economies.

Moreover, if the primary consumption markets are in the advanced economies, and labor costs of manufacture are less of an issue, then it makes more sense to locate automated plants closer to the end consumer. Doing so will reduce transportation costs and cut the time it takes for a product to go from the drawing board to the hands of the consumer. It will also allow firms to be more responsive during troughs in consumer demand by reducing outlays for redundant labor.

But advanced robotics is not only about making labor costs less relevant. As automation becomes more sophisticated and “intelligent” in the ways described above, the factory manager will be less the boss of a team of production-line workers and more of a highly skilled computer scientist, engineer or systems analyst—skills more common among workers in advanced economies. As advanced robots communicate and work with each other—often with another robot some distance away—such manufacturing firms will need to exist in commercial environments where trust and cooperation between third parties is primarily the function of a political economy that upholds the rule of law in areas such as contract law, property and intellectual-property rights, and commercial confidentiality. That’s not the case in guanxi-type societies, in which trust rests on personal and social networks and loyalties.

Given the more limited application of the technology and the fact that the process is still cumbersome and slow (even if print speeds are rapidly improving), the future of 3-D printing is less assured than that of advanced robotics. Like automation, 3-D printing lowers the relevance of manufacturing workers, making labor costs less important in the cost equation. On a cost-per-unit basis, a 3-D-printed product is fairly constant however many units one makes. This means that 3-D printing could well be more cost-effective when producing a low number of products. In addition to the fact that 3-D-printing operations can be done in smaller spaces, making it a technology eminently suitable to operate in crowded modern cities, advanced-economy firms will have few incentives to locate 3-D-printing operations in low-income countries. The technology is highly suited to producing complex, low-volume and highly customizable products more applicable to advanced economies than developing markets. For example, Western companies such as Boeing are using 3-D printing for around two hundred different parts for ten aircraft platforms.

But the true disruption is in the way 3-D printing allows designers, end users and producers to experiment and innovate from the inside out. This means that advanced-economy firms with a current stranglehold on products with advanced designs and materials will be the first to digitize their products and allow their stakeholders to improve the product and introduce innovations at low cost. For example, NASA and Boeing have signed a multibillion-dollar agreement to develop a giant rocket that could go into deep space. Imagine what scientists, engineers and other highly skilled workers from these two American organizations could come up with using 3-D-printing processes and technology to experiment and innovate.

Possibilities such as the one above are significant. While the traditional value proposition of export-oriented East Asian economies was to produce commodity goods advanced economies needed at lower cost, 3-D printing facilitates the development and production of tailored products and maybe even whole sectors that completely bypass the low-cost, cookie-cutter offerings of developing economies. Far from moving up the manufacturing value chain as developing Asian economies hope to do, many will not be able to even add value when it comes to products designed and produced by 3-D-printing processes. Like many new technologies, 3-D printing (and advanced robotics) may well exacerbate inequality between developed and developing countries, rather than lessening it.

It is impossible to know which manufacturing technologies will take off and become genuinely “disruptive” in the future. It would be foolish to attempt to offer solid predictions of what manufacturing will look like in two or three decades’ time. Instead, it’s enough to note that there are compelling reasons—economic and technological—why an export-oriented model that worked for a few East Asian economies in the past may not work so well for the many in the future.

More broadly, making predictions about future geostrategic power based on linear extrapolations of past national and regional GDP growth into the future is likely to mislead rather than inform. Even if national power is based on economic strength, as the contemporary world assumes, the ways countries grow their economies, and how successfully they innovate and adapt, offer a better insight into national resilience, their future strength and ultimately their geostrategic role in the world.

All of this is to say that the “Asian Century” may well eventually arrive. But for now it’s something of a pipe dream. The two billion people living in developing countries in East Asia may want to follow in the footsteps of their advanced-economy neighbors, but new, formidable challenges stand in their way. They’ll need a changed model, one reflecting the reality that the next half century won’t be a mere echo of the last one.

John Lee is a senior fellow at the Hudson Institute, an adjunct professor at the Australian National University’s Strategic and Defence Studies Centre, and a visiting fellow at the Institute for Southeast Asian Studies in Singapore.