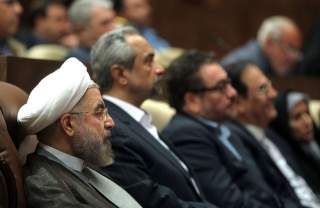 Now that we are nearing the July 20 deadline for P5+1 and Iran nuclear talks, it is important that we have a sober understanding of the difficulties the White House will have tailoring sanctions relief so as to secure and sustain a lasting nuclear agreement. While the legal obstacles to sanctions relief—which remains an underappreciated aspect of the ongoing negotiations—pose a significant hurdle to the conclusion of a final agreement, the real danger might well stem from U.S. ‘sanctions hawks’ who threaten to convince the White House to construct sanctions relief on such a narrow basis that Iran’s benefit under a deal is negligible at best, thereby unraveling the long-fought agreement. If that happens, the ostensible logic of U.S. sanctions policy—i.e., to use sanctions as a bargaining chip to win Iranian concessions on its nuclear program—becomes foiled, and the White House will have adopted the perverted logic of those who see economic sanctions as a means to bludgeon Iran, skirt the opportunities for a negotiated settlement, and prepare the ground for war.

This is a scenario that must be avoided at all costs. That is why it is vital that we step back and evaluate the overblown predictions of months past, when ‘sanctions hawks’ exaggerated Iran’s expected relief under the Joint Plan of Action (JPOA), so as to warn against the White House overcorrecting and dooming the possibilities for a peaceful resolution to the Iran nuclear dispute. We are too close to a “breakthrough”—as the President stated this week—to allow spoilers to do their work and wreck our best shot at preventing a nuclear-armed Iran.

Even before the Joint Plan of Action was concluded last November, dispute erupted over the precise measure of relief the P5+1 was offering Iran. Some—including Members of Congress, the Israeli Government and the Foundation for Defense of Democracies (FDD)—forecasted Iran’s expected sanctions relief under the JPOA to be double the estimate produced by the Treasury Department. (David S. Cohen, the Treasury’s Under-Secretary of Terrorism and Financial Intelligence, had repeatedly argued that sanctions relief would net Iran only $6-7 billion.)

Leading the charge was Mark Dubowitz, FDD’s Executive Director and long-time sanctions advocate, who argued just prior to the interim deal that Iran would receive a “massive sanctions relief windfall of $20 billion or even more.” This “windfall” would include, Dubowitz claimed, “$5-6 billion” in petrochemical exports and “at least $9.6 billion in gold sales.” Soon after the interim deal was concluded, Dubowitz repeated this claim in the Wall Street Journal—though this time chalking it up to the relief on oil sanctions and Iran’s automotive sector.

Has time proven Dubowitz right? Not quite. According to Treasury’s own analysis, its estimate as to Iran’s expected relief from the sanctions is holding strong. Last month, during a Senate hearing, Under-Secretary Cohen stated, “Nothing that we have seen [at Treasury] leads us to question that estimate [of $6-7 billion]. If anything, that estimate is probably on the high side.” Israel’s former head of Defense Intelligence, Maj. Gen. (ret.) Amos Yadlin recently concurred, saying, “What we are seeing now is that the sanctions—very much like President Obama and Secretary Kerry predicted—are still holding.”

None of this should be surprising. In conversations I have had with Treasury officials, old and new, it is clear that the sanctions relief granted Iran was specifically designed to be so narrowly tailored. For instance, while sanctions on the export of Iran’s petrochemicals were suspended under the JPOA, those targeting investment in—and the provision of goods and services to—Iran’s (decrepit) petrochemical sector were not. This meant that while Iran was free to export its petrochemical products, its real pressing needs—i.e., foreign investment—remained under sanction. Moreover, the time-limited nature of the JPOA made some concessions—such as the lifting of restrictions on insurance for Iran’s petrochemical exports—of little value to Tehran, as claims related to the insurance would have to be resolved in an impossible time frame.

In short, evidence shows that Iran’s sanctions relief was either equal to or less than the predictions offered by the administration. Meanwhile, those whose claims have proved exaggerated have subtly altered the nature of their argument, as Dubowitz did last week in The National Interest when he argued that the JPOA “may have triggered indirect economic relief to Tehran that is much greater than the U.S. estimate…” Last November’s certitude has become today’s conjecture, it seems.

While limited and carefully-tailored sanctions relief might have been the right policy during the duration of the interim deal—designed as it was as a mere placeholder for the parties to negotiate a final agreement—the White House will need to reconsider its objectives and the means by which it pursues them both before and over the course of a final deal. This will mean recognizing what should be a truism in Washington: sanctions were not an end in and of themselves, but a means to impose limits to Iran’s nuclear program. In other words, the administration shouldn’t be afraid to trade in sanctions relief upon conclusion of a final deal and satisfy the sanctions logic.

Sanctions hawks, however, would prefer the White House to tailor sanctions relief so narrowly that Iran gets no real benefit from the deal at all. Dubowitz, for example, has turned “psychologist” and is now warning Washington that it stands to turn the market’s psychology “from fear to greed”—thus improving market sentiment and undermining U.S. leverage at the negotiating table—by promising Iran sanctions relief. His prognosis is for Congress to pass S.1881 and hang the threat of sanctions over Iran’s head eternally—a sure means to collapse the negotiations.

His claim, however, rests on a lack of appreciation for how sanctions have affected markets. At their height, U.S. sanctions prescribed nothing short of “shock therapy” for firms that did business with Iran. For instance, when Standard Chartered was alleged to have violated U.S. sanctions laws, it settled with US regulators for $327 million—an astronomical sum that persuaded not just the British bank, but others as well to end their connections with Tehran. Recently, new heights were reached when reports indicated that U.S. regulators would soon fine France’s BNP Paribas a sum total in excess of $10 billion—in part for Iran sanctions violations. Brute enforcement like this was (and is) designed to change firms’ behavior vis-à-vis Iran, and to a large extent, it has performed this task exceptionally well. Few are willing to risk their reputation—much less their bottom lines—to do business with Iran before sanctions are lifted on a more permanent basis than at present.

This is what renders Dubowitz’ concern over market psychology precisely backwards: Instead of the limited sanctions relief under the JPOA accelerating positive market sentiment towards Iran, we continue to see firms fail to take advantage of openings in trade with Tehran that the JPOA not only permits, but actually incentivizes (e.g., the financial channel for humanitarian trade). This is, no doubt, because markets appreciate risk and the risk of doing business with Iran—as a matter of reputation, sound business judgment and firms’ bottom lines—continues to ward against any serious openings.

So while much concern in Washington is focused on the United States carefully tempering enthusiasm for sanctions relief and limiting the number of entrants into the Iranian market, the White House may increasingly find itself with a much different problem: risk-averse firms that see narrowly tailored, time-limited sanctions relief as doing little to provide the assurances needed for them to resume business ties with Iran.

In the end, Tehran might be the gold rush that no one is, in fact, rushing to. In that case, we should expect Iran to do as we would do if Iran’s nuclear concessions did not end up satisfying our core concerns with its nuclear program: renege on the bargain struck and start the conversation from ground zero. If that sounds as unpromising as I expect it does, then we better take into account Iran’s goals at the negotiating table and shape sanctions relief so as to both maintain leverage while also providing Iran meaningful reprieve. Especially if we want a final nuclear deal with Iran to stick.