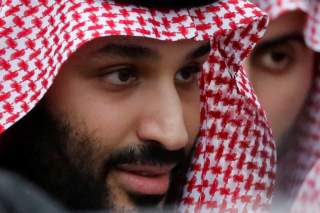 SINCE THE TRUMP Trump administration’s May 2017 decision to terminate the Joint Comprehensive Plan of Action (JCPOA) with Iran, many have speculated that the Islamic Republic of Iran will soon resume its nuclear weapons program in response to renewed U.S. unilateral financial and economic sanctions. Even so, the current conventional wisdom is that the Kingdom of Saudi Arabia—enjoying Washington’s fulsome political and military support for its regional strategic objectives—will have little interest in acquiring nuclear weapons.

But what if that assumption is wrong? Under what circumstances might Saudi Arabia, currently being led by Crown Prince Mohammed bin Salman (MbS), conclude that the clandestine and rapid acquisition of a nuclear arsenal would help address the challenges the country faces? In the following pages, I outline how such a scenario would unfold and detail how governments would likely respond to the emergence of a nuclear-armed Saudi Arabia.

IT HAS been a basic U.S. assumption since the mid-1960s that powerful geostrategic friends and allies can be dissuaded from acquiring nuclear weapons so long as they feel secure as the result of an explicit or implicit U.S. extended deterrent against their enemies. The credibility of that commitment depends on both U.S. military forces serving as an instrument of credible extended deterrence and the political, economic and military support to the state in question. Although there has been no formal alliance between them, Washington and Riyadh have maintained a robust strategic partnership since the end of World War II. This partnership is based upon U.S. and European dependence on the free flow of petroleum out the Persian Gulf region at non-inflationary prices, along with Saudi Arabia’s relative military inability to fully provide for its own national defense. Even though the Trump administration has taken an enhanced stance to shore up this partnership via substantial arms sales and a tough geostrategic posture toward Iran, MbS may still opt to pursue other options to enhance his country’s national posture. This could occur due to the financial squeeze on the Saudi economy, faltering internal reform, a sense of regional encirclement by Iran, and an unwillingness of the United States and Israel to take decisive military action against Tehran.

From Riyadh’s perspective, the regional geostrategic environment has deteriorated dramatically in recent years, with Tehran making strategic advances amidst the civil wars in Syria, Iraq and Yemen. This has generated some anxiety over the prospect of Tehran, or a Shia-dominated Baghdad, stirring up significant domestic unrest in Shia-majority Bahrain and/or Saudi Arabia’s Eastern Province. Recently, it seemed that the Syrian Civil War was headed toward a near-total victory by the Assad regime, despite continued U.S. military and political support for the quasi-independent state of Rojava in eastern Syria. This past winter, U.S. president Donald Trump decided to pull out the approximately two thousand troops located in eastern Syria, thereby cementing the Assad regime’s victory. That decision was partially reversed: a smaller U.S. presence, along with a French and British contingent, still remains. This continued military assistance to the Syrian Kurds and their local Syrian Arab allies ensures the de facto partition of Syria approximately along the Euphrates River.

This prospect of a nearly complete Assad regime victory has greatly alarmed Riyadh’s ally of convenience, Israel. Jerusalem is now worried that Tehran will establish a quasi-state entity in southern Syria akin to the militant and militarily-competent Hezbollah that is now entrenched in Lebanon. Of great concern is the prospect that Tehran will succeed in deploying precision-guided rockets and mobile short-range ballistic missiles to menace Israel’s military facilities and critical civilian infrastructure. The possibility has greatly heightened the likelihood that Jerusalem will launch a massive air and ground campaign into southern Syria with or without the tacit acquiescence of Assad’s other major ally, the Russian Federation. Such a preventive intervention might spiral out of control and devolve into a full-scale regional war, with sustained Israeli air and missile strikes against strategic targets inside Iran.

Riyadh, in turn, might help Israel by opening an air corridor over northern Saudi Arabia to facilitate Israeli airstrikes. Tehran would likely then retaliate against Saudi Arabia and Gulf Cooperation Council states that help Israel in this regard, striking back via strategic cyberattacks or by long-range precision-guided cruise and ballistic missiles. A conflict of this scale would greatly destabilize the global oil and gas markets, prompting the United States, the European Union (EU), China, Japan, South Korea and India to try to end the conflict as soon as possible. Washington’s role in this conflict would likely be decisive in either encouraging further military escalation or peacefully resolving the conflict. Given the presence and prominence of various Iran hawks in the senior levels of the Trump administration, it is plausible that Washington views any regional war between Israel, Iran and Saudi Arabia as an opportunity to inflict severe damage on the regime in Tehran’s energy and military-industrial capacity—and thereby its capacity to govern domestically and project power in the Persian Gulf.

It is worth noting that this scenario is far from impossible: the prospect of direct military conflict between the United States and Iran has risen substantially over the past year, as Tehran has attempted to drive up the price of oil and natural gas through a series of semi-clandestine attacks on a number of petroleum tankers in the Persian Gulf and the Gulf of Oman. The United States, in turn, has sent ground, air and naval reinforcements to the region to deter further Iranian military action and signal that it is prepared for outright retaliation for the same. This scenario nearly came to pass during this early summer, when President Trump seriously considered but rejected a “kinetic” military response to the Iranian shoot down of a U.S. Navy RQ-4A Global Hawk reconnaissance drone flying over the Gulf of Oman. Even more dramatic and destabilizing was the Iranian precision drone/cruise missile attack on key oil production facilities during the late summer that was followed by no immediate Saudi and/or U.S. military response. A future escalation towards outright war remains well within the realm of possibility.

To the disappointment of Riyadh, a decisive military showdown between Washington/Jerusalem and Tehran as described above may not occur. The prospect of a significant increase in the price of oil following a major armed clash in the region would likely stay the hand of the Trump administration. After all, given that the current state of the world economy is burdened with the prospect of an escalating U.S.-China trade war, a spike in oil and gas prices might very well trigger a dramatic global economic slowdown, if not an outright recession. Washington may instead conclude that financial and trade pressures on the EU, Japan and China to renew harsh economic sanctions against Iran is the most optimal course of action. Yet implementing this approach takes time and does little to curb Iran’s expanding influence in Yemen and Iraq. The realization that Washington cannot be fully relied upon to restrain Tehran’s advances, even with a friendly administration in the White House, might prove to be a tipping point for MbS and his allies in Riyadh—if the United States cannot deter Iran, then Saudi Arabia must find its own means to do so.

BEYOND INTERNATIONAL considerations, domestic factors may also push MbS and his allies to pursue a nuclear arsenal. Riyadh recognizes that the nation’s economy is dependent on oil and fears that the emergence of a “peak oil demand” situation within the next decade will leave the Kingdom without economic recourse. Thus, MbS has launched a major effort to move the Saudi economy away from being primarily an exporter of oil and gas to a producer of advanced, twenty-first-century technological, industrial and agricultural products. To help stimulate this economic transformation, MbS has also set out to modernize the Kingdom’s political and economic system of Saudi patronage and conservative religious rule. But while this agenda may have Saudi Arabia’s best interests in mind, it also overturns the country’s political culture and presents MbS and his allies with an unprecedented opportunity to consolidate power. Naturally, domestic opposition has risen up and is keen to criticize the prince when possible. The prince is staking his present and future reign on the implementation of his reform program, and that success will either placate or silence his critics over the long term.

Unfortunately for MbS, top-down reform efforts are fraught with risk, and the early results from his campaign are not promising. For example, the plan to sell shares of the country’s state-owned oil company (Saudi Aramco) on the global market to generate more than 100 billion dollars of income remains a complex and much delayed initial public offering. That delay is prompted in part by the vulnerability of Aramco’s key infrastructure to future precision missile attacks by Iran. In the near-term, Riyadh has opted to go into greater international debt by issuing a new round of bonds, using the assets of Saudi Aramco as collateral. On a related note, the Kingdom’s expensive economic transformation means that there is a need to more carefully manage the costs of the country’s military buildup, perhaps even making some budget cuts. Instead, Riyadh has seen fit to continue purchasing hundreds of advanced fighter bombers that are likely to remain on the flight line due to a lack of trained and competent Saudi pilots.