Will Singapore be Reykjavik Redux? 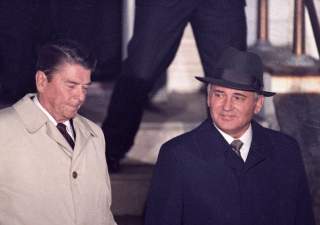 With so many pundits predicting what will happen at the Singapore showdown between Trump and Kim, someone's bound to be right.

Just who that someone will be is anybody’s guess. The summit between United States President Donald Trump and North Korea’s leader Kim Jong-un brings together two of the most unconventional and unpredictable leaders in the world.

That said, going into the summit, it’s not at all hard to define what would be a good—and a bad—outcome from the American perspective.

Let's start with what a disastrous outcome would look like. The only terrible result for the United States would be a compromise that weakens Trump's current strategy of applying "maximum pressure" on Pyongyang.

The beauty of the maximum pressure strategy is that it safeguards America's most important interests, regardless of what Kim's regime does. Those two most vital interests are making sure that 1) North Korea cannot directly threaten the U.S. homeland with nuclear weapons and 2) there isn't a war in Northeast Asia.

If the U.S. government holds fast to that strategy until North Korea no longer poses a nuclear threat, the Singapore summit will be successful. Otherwise, the summit will put Americans, South Koreans and the Japanese people at greater risk.

All Trump has to do is follow the lead of President Ronald Reagan at Reykjavik, Iceland when, in 1986, he held a summit meeting with Soviet leader Mikhail Gorbachev. At that historic meeting, Regan knew not to compromise on what is really important.

At that meeting in Iceland, Gorbachev put a significant strategic arms reduction on the table. In return, all Reagan had to do was scrap his missile defense plans. But Reagan walked away. He was not about to give up his ace in the hole— the Strategic Defense Initiative that he viewed as the ultimate, long-term assurance of peace.

Reagan’s SDI plans were what brought Gorbachev to the table, just as Trump’s “maximum pressure” strategy is bringing Kim to Singapore. Give that up, and the administration gives up its most potent leverage.

The administration reportedly has held off on applying additional sanctions in the lead up to Singapore. That's fine as it is not a weakening of sanctions to do so. Instead, it's a clear warning that there are lots of additional sanctions ready to go if Kim refuses to play ball. In fact, those sanctions won't hit just North Korean entities but Russian and Chinese actors too.

So what's a good outcome from the Singapore summit? Not much, really. The president doesn't have to "deliver" anything—not even those custom-made coins. The big plus of the summit is the simple fact that the U.S. gave diplomacy with North Korea a chance—again. That, in itself, is a good enough outcome.

Expectations ought to be low. Trump can’t hand Kim a freebie or softball deal, not after coming down on the Iran Deal. The White House can’t label the JCPOA feckless, then enter some feckless arrangement with Kim.

Moreover, politically, the president is in a great negotiating position: he doesn’t need a deal. Half of America hates him, and they’ll still hate him with or without a deal. Same goes for the other half of America, who will cheer him no matter what goes down in Singapore.

The political calculus is the same on the world stage, as well. If the summit ended with Kim loading all his nuclear weapons onto Air Force One and freeing all of his political prisoners, Trump still wouldn't get the Nobel Prize.

The best course for Trump is doing what's best for America, and that's to make sure he leaves the summit with the maximum-pressure strategy intact.

In the end, our friends and allies will stick with us. Our competitors will respect us. And voters will make up their mind based on other issues.

The bottom line for Trump is: when in Singapore, be Reagan in Reykjavik.