Will Somalia's Elections Change the War on Al-Shabaab? 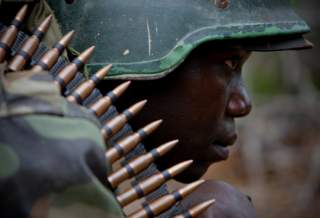 In counterinsurgency, military victories tend to be easier than political ones, and Somalia seems to be a case in point these days. On the one hand, al-Shabaab has retreated from much of the country and suffered heavy losses among both its leadership and its rank and file. On the other hand, this month’s legislative and presidential elections, originally touted as pivotal progress in the country’s long-term stabilization efforts, look set to fall well short of initial expectations. While the slow political progress is disheartening, it is not a death knell to the U.S.-supported counterinsurgency.

Despite their numerous flaws, the elections should at least provide moderate political stability by appeasing Somalia’s powerful clan leaders. This, in turn, will allow African Union forces (AMISOM) and the Somali National Army (SNA) to focus on ousting al-Shabaab from its remaining territories. A prudent U.S. strategy would therefore involve moderately expanding vital material, advisory and air support to AMISOM and SNA forces, while also utilizing tailored diplomatic means to assist the gradual development of Somali governance.

AMISOM and the Importance of Tailored Engagement

AMISOM first deployed to Mogadishu in February 2007, in an effort to protect the beleaguered Transitional Federal Government (TFG), which had just returned from exile with the support of Ethiopian forces. As al-Shabaab metastasized to control 55 percent of the country with twelve thousand fighters in 2010 (according to estimates from a recent RAND report), the African Union changed AMISOM’s mandate from peacekeeping to “peace enforcement,” a euphemism for aggressive counterinsurgency. AMISOM began a concerted push to recapture Mogadishu from al-Shabaab in early 2011, and that autumn the Kenya Defence Forces launched a separate assault with SNA troops that dislodged the insurgents from much of southern Somalia. Since 2011, AMISOM forces—which have grown to number roughly twenty-two thousand troops from Burundi, Djibouti, Ethiopia, Kenya and Uganda—have significantly redrawn Somalia’s strategic landscape through several successful combined-force offensives.

Key to the success of AMISOM/SNA offensives has been the tailored engagement strategy that the United States has pursued since 2011. Conducted under the auspices of Combined Joint Task Force–Horn of Africa (CJTF-HOA), tailored engagement involves extensive ISR (intelligence, surveillance and reconnaissance) efforts, training of AMISOM and SNA forces in conjunction with U.S. and EU advisers, limited direct action operations by U.S. special operations forces, and increasingly frequent airstrikes. Using both manned aircraft and UAVs, the United States has effectively targeted al-Shabaab leadership (Ahmed Abdi Godane, the group’s emir, perished in a U.S. strike) and provided crucial Tactical Air Support (TAS) for AMISOM/SNA offensives. For all the tactical benefits of tailored engagement, the strategy also poses minimal risk to U.S. personnel and equipment and does not catalyze blowback from local populations to the extent that a more robust intervention would.

The U.S.-AMISOM-SNA approach has produced laudable results. According to RAND estimates, al-Shabaab presently controls no more than 5 percent of the country and has lost roughly a third of its fighters and dozens of senior officials since 2011. Al-Shabaab still poses a very tangible threat to Somali security; as the group has retreated and lost institutional cohesion and revenue sources, it has increasingly employed simple but deadly terrorist tactics in both Somalia and throughout East Africa, killing more than four thousand people since 2011 according to data from START Global Terrorism Database. Indeed, al-Shabaab has ramped up its bombing campaign in an effort to spoil the upcoming elections. Importantly, however, the Somali government has gone from controlling merely a couple of Mogadishu neighborhoods in 2006 to administering broad swathes of the country, including the entirety of the capital and key ports.

Elections and Stabilization: A Long Road Ahead

Moving forward, strong state institutions will be necessary to mitigate the popular grievances that bolstered al-Shabaab in the insurgency’s early stages. Between 2007 and 2010, al-Shabaab deftly exploited Somalia’s insecurity and poor national governance, the nationalist backlash against the presence of Ethiopian forces, and dissatisfaction with the composition of the TFG—al-Shabaab drew strong support from the Habar Gidir subclan of the Hawiye, which felt it had lost its traditional political influence to the Rahanweyn-dominated TFG. AMISOM, in addition to providing security in much of the country, has helped allay popular fears of Ethiopian imperialism by subsuming the Ethiopian units into the multinational force, but AMISOM must eventually turn over its security mandate to the SNA. Similarly, building strong national governance to mitigate interclan conflict remains a long-term objective. Unfortunately, this year’s elections offer minimal progress in this regard.

The 2016 elections are a significant improvement over those held in 2012, when 135 clan leaders elected a parliament that in turn chose the president. This year’s elections nevertheless fall well short of a one-person, one-vote standard. Poor infrastructure and the continued threat of al-Shabaab attacks render a nationwide popular election impossible. The government has instead adopted an indirect, bicameral approach, in which more than fourteen thousand representatives from Somalia’s clans will elect a lower house while the state governments, which exercise considerable autonomy, will elect the upper house. Together, the two houses will elect a president from more than a dozen candidates.

The shortcomings of this year’s elections are manifold. For starters, the elections have already been delayed until the end of October at the behest of the incumbent president Hassan Sheikh Mohamud, raising concerns among international donors of electoral manipulation. The most promising political development of late has been the government’s decision to require that parliamentarians register with a political party by October 2018. This was lauded by the international community as a critical first step in moving away from purely clan-based politics towards a more representative and durable political system. Unfortunately, this development will have no effect on this year’s elections, which will be determined by traditional clan politics. As was the case in 2012, four out of every 4.5 seats in parliament will be held by a member of each of the four biggest clans (Darod, Dir, Hawiye and Rahanweyn). In short, the 2016 elections, though more representative than those of 2012, will in effect perpetuate the political status quo.

Despite the Somali government’s multitude of weaknesses—including its reliance on foreign aid, primarily from the United States and EU—it is noteworthy that the government has been successful in offering basic services in the areas under its control as well as assuaging the worst interclan tensions through political patronage (hence the 4 out of 4.5 rule in parliament). Such patronage certainly contributes to weak governance, which in turn facilitates the development of insurgencies. But it is also significant that from an operational perspective, the lack of a serious interclan confrontation has permitted AMISOM and SNA forces to focus on combating al-Shabaab with great effect.

With regard to America’s strategic interests, therefore, the 2016 elections offer opportunity in the near term, at the expense of long-term progress. By perpetuating the status quo, the elections should provide enough political stability to continue counterinsurgency operations into 2017, but the elections will fail to address many of the underlying factors driving Somalia’s insecurity.

U.S. Engagement in Somalia: Where Do We Go from Here?

As it has expanded its area of operations over the past year, AMISOM has suffered a number of disconcerting setbacks, including the loss of several rural outposts to al-Shabaab. Moderately more expansive U.S. support, however, can ameliorate most of the mission’s operational shortcomings while also building the capacity of SNA forces. Deeper analysis of two of AMISOM’s most crippling defeats—the loss of Janaale and El Adde, respectively—identifies inadequate ISR capabilities, a lack of air cover and airlift capabilities, and outdated vehicles as critical vulnerabilities. Moderately increasing the number of aircraft available to CJTF-HOA would allow for expanded tactical air support, while the United States can also supply AMISOM with new vehicles (especially MRAPs, given al-Shabaab’s tactical predilection for IEDs), and airlift capabilities sufficient to service the vicinity of al-Shabaab’s area of operations. Furthermore, CJTF-HOA can increase technical ISR support to AMISOM forces while advisers can increase human-intelligence training for Somali forces, as fostering local intelligence networks requires local troops.

A lack of cooperation between troop-contributing countries has also hampered AMISOM’s operational effectiveness. There is little reason to doubt the interoperability capabilities of the AMISOM forces, however. To take as an example the Kenyan and Ugandan militaries, which together comprise nearly half of all AMISOM forces: both operate in English, have similar doctrines and indeed have the same origin in the colonial-era King’s African Rifles. At present, much of the coordination between CJTF-HOA and AMISOM takes place in the capitals of troop-contributing countries. By establishing a greater administrative presence in Mogadishu, CJTF-HOA can conduct joint training and operational planning with contingents from multiple countries, thus boosting AMISOM’s cohesion.

The most significant challenge that AMISOM presently faces is one that every counterinsurgent force confronts in the latter stages of operations: overextension. As the force of twenty-two thousand recovers rural territory from al-Shabaab, it has inevitably come under strain. While SNA forces will eventually have to assume responsibility for providing security, a surge of AMISOM troops is required in the short term to reinforce recent territorial gains, bolster security in key urban areas such as Mogadishu, and conduct operations against al-Shabaab’s remaining southwestern strongholds. Such a surge is politically challenging at present, given the doubts that some AMISOM countries have professed regarding the future of their mission, but it is not impossible. More concerted U.S. efforts at SNA capacity building (in conjunction with European and Turkish partners), in addition to pledges of increased material support to AMISOM, would help allay the concerns of Ugandan and Kenyan leaders, who fear that they will carry the burden of providing for Somali security indefinitely. Furthermore, there are a number of nations in the African Union that possess military capabilities commensurate to the demands of AMISOM operations and for which a deployment in Somalia would be politically viable and indeed practical, given the operational experience peacekeeping forces gain. The South African, Malawian, Ghanaian and Moroccan armed forces, for example, all have established peacekeeping records and might be amenable to participating in AMISOM should international actors shoulder the costs of deployment.