Will Syria Become the next Major Political Battlefield? 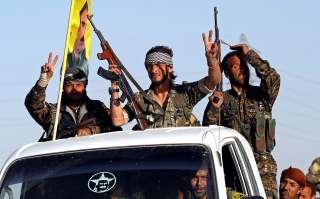 Raqqa, the Islamic State’s de facto capital, fell last week. It was a significant milestone, but more like the end of the beginning than the beginning of the end in the fight against the terrorist group.

Once the self-proclaimed “caliphate” loses the rest of its rapidly diminishing territory, the Islamic State, also known as ISIS, will return to its underground roots and plot a comeback. This is precisely what its forerunner, the Islamic State of Iraq (formerly Al Qaeda in Iraq), did after being decimated by the Bush administration’s surge of American troops.

When U.S. military forces withdrew from Iraq in 2011, U.S. intelligence officials estimated that the Islamic State of Iraq had been whittled down to about seven hundred fighters. Although defeated on the battlefield, the group bided its time. Patience paid off. When disenfranchised Sunni Arabs in Iraq and Syria rebelled against what they regarded as hostile and corrupt non-Sunni governments in Baghdad and Damascus, the Islamic State of Iraq was ready to exploit the situation.

The successful revolt bred more success. By 2013, the group was boosted by an influx of Syrian and foreign volunteers, who mobilized against Syrian president Bashar al-Assad’s brutal regime. The organization renamed itself the Islamic State of Iraq and Syria.

By late 2014, ISIS had seized much of eastern Syria and western Iraq, and declared the formation of a “caliphate.” It attracted more than forty thousand foreign fighters and ruled over roughly ten million people in territory the size of Maryland.

Today, the Islamic State is estimated to have six thousand to ten thousand fighters left in Iraq and Syria. It controls about four thousand square miles along the Euphrates River, which straddles the Syria-Iraq border, as well as enclaves near Damascus, in central Syria, and in western Iraq.

Though on the verge of military defeat, it is a resilient and adaptive network whose explosive growth was enabled by the dysfunctional governance of regimes in Baghdad and Damascus that were perceived to be hostile and unresponsive to the interests of Sunni Arabs.

If those governments continue to fail to meet the needs of Sunni Arabs, then the Islamic State or a similar extremist organization eventually will rise again to challenge them.

Although its “caliphate” is being dismantled, the Islamic State’s ideology—amplified by extensive social media networks—will live on to infect other young Muslims. Indeed, the Islamic State is still growing more powerful in Africa and Asia, particularly in Egypt’s Sinai Peninsula, West Africa and the Philippines. And it remains a potent threat in Europe.

The Islamic State has sent hundreds of militants to Europe and Turkey, where they have formed sleeper cells and have coordinated attacks with local supporters. So far this year, the Islamic State has claimed responsibility for three terrorist attacks in Britain that killed thirty-seven people, a bombing in Istanbul that killed thirty-nine people and attacks in at least seven other countries.

The Next Round of Fighting

As the caliphate collapses in Syria and Iraq, many rival states and subnational groups are competing to fill the vacuum of power.

The Assad regime, backed by Iran and Russia, has proclaimed its determination to recover control over all of Syria.

Moscow cares much more about securing western Syria, where its naval base and air bases are located, but it has provided air support for advancing columns of Syrian- and Iranian-led militias, which are advancing in the province of Deir al-Zour in eastern Syria.

They are in a race with the U.S.-backed Syrian Democratic Forces (SDF)—the Kurdish-led rebel faction that seized Raqqa—to take oil and gas fields and other strategic assets.

Iran also is motivated by the strategic goal of securing an arc of influence across Iraq and Syria to Lebanon. That will enable it to: consolidate its regional dominance, boost its logistical support for its chief surrogate, the Lebanon-based Hezbollah, and prevent the rise of another Sunni Arab Islamist extremist threat to itself and its allies. That influence should allow Iran to outflank Turkey, undermine U.S. influence, and position itself to pose greater threats to Israel.

Tehran has deployed thousands of Revolutionary Guards, primarily to train and advise pro-Assad Syrian militias. But the guards are also embedded with approximately twenty thousand fighters from Hezbollah and more than a dozen other Shiite Islamist militias from Iraq, Afghanistan and Pakistan.

Iran is now trying to twist the Syrian kaleidoscope, repositioning itself and its surrogates to exert greater pressure on Israel. An Iranian-controlled Iraqi Shiite militia deployed in Syria, Hezbollah al-Nujaba, has formed a “Golan Liberation” force and publicly declared itself ready to take action against Israel. Both Iran and Israel appear to be preparing for a war in Syria and Lebanon.

Turkey, which initially intervened in Syria in support of rebels fighting against the Assad regime, now appears to be focused more on securing its border, defeating the Kurdish insurgency in eastern Turkey, and blocking Syrian Kurds from establishing an independent state that could become a source of support for Kurdish separatists inside Turkey.

The future of U.S. policy remains the big question mark in Syria. President Donald Trump said that, after the fall of Raqqa, the United States “will soon transition into a new phase” in Syria and offer support to local security forces.

But the scope, scale, and duration of such U.S. support remains unclear, particularly in light of the president’s known aversion to entangling alliances and nation-building.

The United States has deployed more than five hundred special operations forces in Syria and about five thousand military personnel in Iraq, primarily in training and advisory roles.

Pentagon officials are preparing for the next phase of the campaign against the Islamic State. They will support an SDF offensive to roll up Islamic State forces by advancing down the Euphrates River toward the Iraqi border, which is where they are expected to link up with Iraqi forces advancing on the other side of the border.

But these plans may have been disrupted by the swift advance of Iranian-led Syrian and Hezbollah forces. Supported by Russian air strikes, those troops have cut off the SDF’s most direct line of advance toward al-Bukamal, a key Islamic State stronghold near the border.

One particularly significant development was the construction of a Russian pontoon bridge, which enabled Iranian-backed forces to cross the Euphrates and prevented SDF fighters from advancing down the road on the east bank of the river. The river crossing signaled Russian support for Iran’s efforts to carve out a secure land bridge from Tehran to Damascus. It also violated the deconfliction agreement between Washington and Moscow.

The Trump administration must decide how to push back against Russia’s increasingly confrontational behavior in Syria. Moreover, it must decide how best to contain and roll back Iran’s growing influence in Syria and elsewhere.

The Kurdish-dominated SDF is one of the strongest military forces in eastern Syria. But it also presents political problems for Washington. The predominantly Arab population of Raqqa distrusts the Kurds and fears that Kurdish forces will impose a new occupation, rather than a liberation from the Islamic State.

U.S. support for Syrian Kurdish forces also is resented by Turkey, a NATO ally that is fighting its own war against the Kurdistan Workers’ Party (PKK), which has been designated as a terrorist organization by the United States and the European Union. Syrian Kurds made matters worse by raising a giant banner in Raqqa of PKK leader Abdullah Ocalan, who is jailed in Turkey on terrorism charges.

How deep and enduring is the Trump administration’s commitment to the Kurdish-led SDF? This is unclear. The alliance is the most viable current option for blocking Iranian/Syrian consolidation of control over eastern Syria, but it also could undermine U.S. relations with Turkey and with Sunni Arabs who soon will chafe over Kurdish rule.

The bottom line is that, with or without the SDF, Washington must remain engaged in Syria and Iraq after the military defeat of the Islamic State. It is the only way to prevent an ISIS re-emergence and to offset Iran’s efforts to twist the regional kaleidoscope into a pattern more favorable to its own interests.

James Phillips is a senior research fellow specializing in Middle Eastern affairs for The Heritage Foundation, a leading think tank based in Washington, DC.