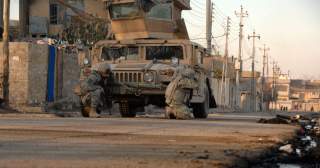 IN LATE 1986, a thirty-four-year-old declared doctrinal war on the U.S. Army. With the stroke of a pen, one anonymous major set in motion a bureaucratic insurrection that, decades later, would subsume a cabal of battle-hardened revolutionaries and reshape American warfare. It was the opening salvo, the beginning of a story that ends with a maverick warrior-scholar running Donald Trump’s ramshackle National Security Council.

That winter, Parameters featured an article under the byline Gen. John R. Galvin. But Galvin was not the true author; he had delegated the writing to his assistant, an imperious major putting the finishing touches on his Princeton PhD. David H. Petraeus relished the task.

Warfare is “no longer fought simply by the military,” he wrote. “It now encompasses entire populations . . . and its outcome depends more and more on their collective will, what Clausewitz termed ‘the popular passions.’” Petraeus pilloried the Army for its parochial obsession with firepower and conventional combat. He was warning of chinks in the armor. Unlike the brass, he did not see insurgency, terrorism and guerrilla warfare—“small wars”—as aberrations. Scholarship and a penchant for disruption fueled his diatribe. Petraeus dismissed the efficacy of merely killing rebels and touted the strategic logic of addressing “contentious, long-ignored, but popular issues tied to key facets of national life.” At bottom, war is a human endeavor.

His self-described “ramble” called into question the Army’s capacity to adapt. Military leaders “don’t look up very often,” he observed, so distracted are they by the day-to-day slog. Petraeus worried that the dearth of critical thinking would exact a heavy toll. “Let us get our young leaders away from the grindstone now and then, and encourage them to reflect on developments outside the fortress-cloister,” he concluded. “Only then will they develop into leaders capable of adapting to the changed environment of warfare and able to fashion a new paradigm that addresses all the dimensions of the conflicts that may lie ahead.”

Today, his critique rings prophetic. America’s post-9/11 invasions of Afghanistan and Iraq restored “insurgency” to national-security parlance. The ensuing conflicts were messy and slow. They laid bare the limits of the military instrument and the bankruptcy of conventional doctrine. Vicious, resilient insurgencies unleashed by the Taliban, Iran-backed Shia militias, Al Qaeda in Iraq and, later, the Islamic State have imprinted haunting images on the American psyche.

Trump rode those very waves of fear and angst into the White House. The public’s hunger for closure pales in comparison with its thirst for blood. Over and over again, Trump bewitched voters with promises of consigning ISIS to the fires of hell, without repeating the mistakes of the Iraq War. But evicting insurgents from their strongholds will not suffice. The president cares deeply about optics; he can’t afford for the next ISIS to take root on his watch. Remember when candidate Trump accused Barack Obama and Hillary Clinton of cofounding ISIS? The attack ads would write themselves. Only an enduring victory will do.

IF ANYONE can help the president realize that objective, it’s his national security advisor, Lt. Gen. H. R. McMaster. McMaster first came to prominence in 1997, when he turned his PhD dissertation into a book. In Dereliction of Duty, he excoriates the joint chiefs of the Vietnam War era for not expressing dissent with enough conviction. McMaster always aspired to speak truth to power. The Iraq War turned principle into deed.

It was during the Iraq War that the chain reaction triggered by Petraeus’s ghostwriting reached a climax. Along with James N. Mattis—now Trump’s defense secretary—a cast of erudite field officers and a clutch of civilian intellectuals, McMaster and Petraeus reengineered the way the United States thinks about warfare. They revolutionized a U.S. military culturally predisposed to the status quo. They changed the government’s most obstinate bureaucracy from within. They proved that America’s storied warfighters, peerless though they are in dispatching conventional foes, are alone no match for the insurgencies that have metastasized throughout the Middle East. McMaster, Petraeus and their fellow rabble-rousers were dubbed “COINdinistas,” a tribute to the figurative insurgency they launched in order to teach the U.S. government how to fight literal insurgencies.

The Iraq War was their crucible. It crystallized for them that defeating insurgents rests on a symbiosis between soldier and civilian, between killing and rebuilding. In February, 121 retired flag officers, Petraeus among them, reaffirmed that precise belief in a letter to Congress. They averred their “strong conviction that elevating and strengthening diplomacy and development alongside defense are critical to keeping America safe.” They turned Mattis’s own words against him. As the head of Central Command, he once said, “If you don’t fully fund the State Department, then I need to buy more ammunition.” Historically, that’s a bipartisan sentiment, verging on gospel.

So when the White House announced in mid-March that it aimed to enfeeble the State Department and USAID, and extinguish the United States Institute of Peace, it’s no surprise that national-security pundits across the political spectrum struggled to suppress the invective bubbling beneath the surface. Some tempered their rage to inveigh against the president’s “skinny budget.” Many are summoning the ethos of liberal internationalism. The more compelling rejoinders, though, are speaking to the countless ways in which Trump’s budget would damage America’s cold, hard material interests. Because it would. It would jeopardize what every elected official claims to treasure without reservation: America’s shimmering coffers and legendary warfighters. The sheer symbolism of Trump’s proposal, regardless of its plausibility on Capitol Hill, speaks volumes. Its shockwaves will reverberate and linger.

The White House’s budget outline marks the apex of a string of contradictions. The president’s relationship with the military is perplexing. Retired four-stars head his Homeland Security and Defense Departments, and an active-duty three-star sits atop his NSC. Trump likes being seen in the company of generals, though some suspect he’s using them as props. His ostensible deference didn’t stop him from publicly blaming them for the botched Yemen raid and subsequent death of a Navy SEAL. In the greater Middle East, Trump has empowered his commanders, but hasn’t provided a semblance of strategic vision—what’s the endgame?

The administration’s disconnect between military action and political outcome is palpable. Officers in the field have been authorized to call in air strikes without permission from more senior officials. On April 13, Gen. John W. Nicholson Jr. dropped the “mother of all bombs” on an ISIS tunnel complex in remote eastern Afghanistan. It was the most powerful non-nuclear weapon ever used in combat and, reportedly, employed without White House signoff. But it’s not just Trump who’s guilty of confusing tantalizing explosions with sound foreign policy. Cable news worked itself into a frenzy, obscuring the difference between tactics and strategy, one awestruck chyron after another. Few paused to ask: what’s stopping another hundred ISIS fighters from replacing those killed?

“We have to start winning wars again,” the president exhorted on February 27. Days later, he pledged to “give our military the tools you need to prevent war and, if required, to fight war and only do one thing. You know what that is? Win. Win! We’re gonna start winning again.” The irony is tragic and comedic, in equal measure. A few weeks later, Trump proposed a budget that would deprive the military of the exact tools he promised them. He seeks to cripple the civilian agencies that consolidate combat success into political victory. Military power divorced from diplomacy cannot win conventional wars. In small wars, raw firepower is even less decisive.

If Trump were to succeed in budgetarily castrating the civilian agents of U.S. foreign policy, he would harm national security. In Iraq, where the administration has escalated the fight against ISIS, he would render the efforts of servicemen and women less consequential, their triumphs fleeting. Mosul will fall. What happens the day after? Sunni and Shia, Arab and Kurd, are unlikely to find peace overnight. Killing bad guys does not a foreign policy make. Without a concerted strategy of security, diplomacy and development, popular passions will once again engulf Iraq. Déjà vu of the worst kind—the kind that sucks American soldiers and dollars right back in.

No White House official is more keenly attuned to this dystopian fate than McMaster. No national-security professional exerts more influence in the new administration. “H. R. knows firsthand the value of diplomacy in bringing conflict to a conclusion favorable to the United States, at the minimum possible cost in lives and dollars,” retired Lt. Col. John Nagl told me. “H. R. knows that in his bones.” Nagl is no ordinary combat veteran. A COINdinista of the highest repute, he possesses unique insight into McMaster and is unencumbered by chain of command. “It must gnaw at his innards,” Nagl said of his friend, “that the administration he is serving is attempting to do this kind of damage to institutions that are so important to the security of our great nation.” He was uninterested in mincing words: “These ideas are asinine.”

And that’s the most confounding paradox of them all: that H. R. McMaster could possibly acquiesce to something so flagrantly antithetical to the American way of war he fought so hard to transform. He knows that “small wars” is a misnomer. When a president fantasizes about short, winnable wars with military-only solutions, young men and women pay for that mistake with their lives, and taxpayers with their wallets. It beggars belief that the strategist of a generation could be complicit in a national-security policy unmoored from common sense.