Will the Pause in South Asian Conflicts Last? 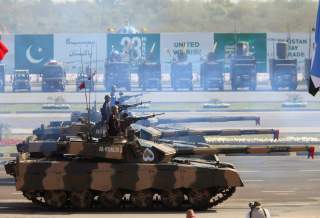 On June 14, an American drone appears to have finally taken out Mullah Fazlullah, the Pakistani Taliban leader who ordered the attack on Malala Yousafzai and the massacre of Pakistani students at a school in Peshawar. Fazlullah had been based in Afghanistan for roughly the past nine years. He was sheltered and funded by the Afghan intelligence agency, the National Directorate of Security.

The next day, the Afghan Taliban’s ceasefire—made possible in part by Islamabad—came into effect, overlapping with the unilateral ceasefire announced earlier by the Kabul government. The scenes were nothing short of stunning. Tens of thousands of Afghan Taliban fighters who had massed near many of the country’s urban centers entered provincial capitals peacefully to perform the Eid prayer with government officials and security personnel. Beleaguered Afghans thirsting for an end to the war were able to taste but for a moment what an eventual peace between Kabul and the Taliban could look like.

There is something in the air not just in Afghanistan, but in South Asia as a whole. As the monsoon season nears, a cool breeze is unexpectedly blowing in, lowering the temperature in a region that had been primed for a great storm. A de-escalation is taking place on many fronts in the region. What remains unclear, however, is whether there is any multilateral understanding linking them and if they have staying power to continue de-escalation.

In mid-2017, South Asia appeared to be veering toward inter-state conflict. There was a Sino-Indo standoff at the China-India-Bhutan tri-border region in Doklam. There was also rising cross-border fire between Indian and Pakistani forces along the Line of Control (LoC) in Kashmir, and Afghan and Pakistani forces exchanged fire across their shared border. Also, the President of the United States, Donald Trump, issued what amounted to a call for endless war in Afghanistan with the announcement of his South Asia strategy. Tensions rose on these four main fronts. Furthermore, as the year closed the Trump administration announced its national security strategy, which emphasized the return of great power politics and was underpinned by U.S. efforts to contain or manage the rise of China and position India as a counterweight.

But recent developments this year indicate a reversal of this slide toward conflict:

●      In late May, India and Pakistan agreed to restore the 2003 ceasefire along the LoC after a year-and-a-half of cross-border shelling that has taken the lives of over a hundred civilians and security personnel on both sides.

●      Afghanistan and Pakistan have held multiple rounds of high-level bilateral talks through a framework—known as the Afghanistan-Pakistan Action Plan for Peace and Solidarity (APAPPS)—aimed at combatting cross-border flows of militants and boosting economic ties.

●      U.S. rhetoric toward Pakistan has softened. In early June, White House South Asia adviser Lisa Curtis said: “We have asked for Pakistan’s assistance in facilitating a peace process and we have sought to understand Pakistan’s own core security concerns and ensure that its own interests are taken into account in any peace process.” That same week, U.S. Secretary of State Mike Pompeo spoke with the Pakistan Army chief, General Qamar Javed Bajwa, on U.S.-Pakistan relations and “the need for political reconciliation in Afghanistan.”

At the outset, it appears that something akin to a grand bargain appears to be in the offing. Indeed, some may argue that it is Beijing that is pushing Islamabad toward a more conciliatory approach vis-à-vis Kabul and New Delhi. But there is no single driver of de-escalation on all four fronts.

APAPPS is the initiative of Pakistan’s General Bajwa, who proposed the framework during a visit to Kabul in October 2017 and Afghan President Ashraf Ghani quickly assented. Ghani likely embraced APAPPS for three reasons. One, it could lead to peace with the Taliban, which would enhance his support among Pashtuns, boosting his chances for reelection. Two, he probably realizes the U.S. military strategy in Afghanistan has failed. And three, Pakistan has made some key concessions to Afghanistan. For example, Ghani had asked for verification mechanisms on the targeting of individuals on both sides of the border. These are being implemented.

Despite the upsurge in violence in Afghanistan (until the recent ceasefire), the APAPPS process has endured, mainly because of behind-the-scenes confidence-building measures between Islamabad and Kabul. For its part, Islamabad appeared to have driven some key figures in the Afghan Taliban over the border into Afghanistan and pushed the Taliban to agree to a temporary ceasefire. Also, Kabul has given up one of its most prized assets, Mullah Fazlullah, who was killed in Afghanistan after Pakistan supplied intelligence to the Afghan government. While APAPPS is a Pakistani and Afghan bilateral initiative, it appears that elements in the U.S. government, such Central Command head General Joseph Votel played a constructive role, even as Trump lambasted Pakistan via tweets and Washington moved to penalize Pakistan at the Financial Action Task Force. APAPPS is belatedly being embraced by senior U.S. officials who appear to have had no hand in its genesis.

APAPPS is a promising framework, but the road to peace in Afghanistan remains laden with obstacles. The Afghan Taliban have not renewed their ceasefire. The central issue for them is the presence of foreign forces. The Trump Administration needs to think, agree, and talk in precise terms on this issue now.

Meanwhile, the Afghanistan political system faces a series of existential tests with elections scheduled for this year and in 2019. It is unclear whether they will take place. Next year's presidential elections will probably exacerbate already troublesome ethnic tensions. Efforts to politically integrate the Taliban will anger many non-Pashtuns, who are aggrieved by many of Ghani's policies that are perceived as majoritarian.

India and Pakistan Give Each Other Breathing Space

The renewal of the India-Pakistan ceasefire this May came in the wake of India’s announcement of a Ramadan ceasefire within the portion of the disputed Kashmir region it controls.

It may be that New Delhi has seen the limits of its so-called “muscular” approach toward both Kashmiris and Pakistan, but a departure from such a policy is unlikely.

India has sought to use force on Pakistan, expanding its shelling across the Working Boundary, targeting civilians in Pakistan’s Punjab province. In 2014, an unnamed Indian security official said: “The prime minister’s office has instructed us to ensure that Pakistan suffers deep and heavy losses.”

But Modi’s heavy-handed approach toward Kashmiris and Pakistanis has failed to yield his government a strategic advantage. Pakistan has responded with its own reprisal attacks, killing eleven Indian army personnel just in the first five weeks of this year.

Anti-India sentiment in the Kashmir valley has surged, resembling a people’s revolt, with civilians literally aiding those targeted by security forces and pelting Indian troops with rocks during active operations. India's use of extrajudicial killings, human shields, and pellet guns—all detailed in a recent United Nations report—have further deepened the animus toward New Delhi.

On Tuesday, the coalition government in Indian-held Kashmir that included Modi’s Bharatiya Janata Party (BJP) disbanded. Its breakup with a local Kashmiri party signals that New Delhi’s “muscular” policy toward Kashmir will prevail, especially with general elections slated for next year and rising Hindutva extremism. Local BJP leaders in Indian-held Kashmir have rallied in support of Hindus who raped and murdered a young Muslim girl.

As India appears to be doubling-down on a hardline approach toward Kashmir, a breakthrough in dialogue with Pakistan is unlikely, at least until after next year’s general elections. Low-key talks between the Indian and Pakistani national security advisers have been taking place since 2015. While General Bajwa has called for comprehensive dialogue with New Delhi to resolve all outstanding disputes, including Kashmir, India is likely to continue to reject this framework.

China and India Choose to Fight Another Day…or Never

Over the course of this generation and the next, the rivalry between China and India will be one of the features of the evolving global system. But direct military conflict is presently not in the interest of either country—hence their “reset.”

Doklam is in China’s periphery, but Beijing’s core interest is cementing its dominance in the South China Sea. It makes little sense for it to further escalate on a less vital front. Beijing also aims to prevent the consolidation of an anti-China bloc of great and middle powers, including India.

Meanwhile, India is uncertain about how to engage China. With the renaming of its Pacific Command to the Indo-Pacific Command, the United States has made clear that it aims to thrust India into a two-ocean power. But not only is India unfit for the task—it fears losing its strategic autonomy by becoming an appendage of the United States.

India’s geostrategic reach has been extended with recent naval access agreements with Indonesia and Oman and naval exercises with Vietnam. But India is on the backfoot in its backyard, losing influence to China in the Maldives and Nepal, while remaining relegated to a secondary player in Afghanistan. New Delhi also lacks a coherent vehicle through which to make its own economic and strategic imprint on Eurasia and the Indian Ocean region.

The South Asia Association for Regional Cooperation, which India had dominated, has been made irrelevant due to New Delhi’s attempts to “diplomatically isolate” Islamabad. For instance, India has parity with Pakistan as a full-member state in the China and Russia-led Shanghai Cooperation Organization (SCO). New Delhi sought entry into the body when its alliance with Russia was robust. But now it is the odd-man out in the SCO as Beijing, Islamabad, and Moscow form a strategic alignment. Meanwhile, initiatives to contain China, such as the Quad or the France-India-Australia “strategic axis,” seem to emerge or reemerge only to lose steam within a short period. A "reset" with China allows India to revisit its present and potential strategic alliances, gauging whether its interests and those of foreign partners truly align.

The escalatory cycle in South Asia has been reversed on many fronts after an extremely volatile 2017. But this may be the calm before the storm, as many issues lie ahead. There are a resilient insurgency and uncertain elections in Afghanistan, tensions simmering in Indian-held Kashmir, and elections coming up in India in which the BJP will play the Hindu nationalist card.

Washington should remain vigilant in managing risk and preventing crises in South Asia. This should include ensuring political cohesion in Afghanistan and perhaps even facilitating backchannel talks between India and Pakistan. With the clock ticking in Afghanistan, conflict resolution should take precedence. Inclusive negotiations between the Taliban, the United States, and a broad segment of actors in Afghanistan (including non-Pashtuns) are the need of the hour. Similarly, after next year's elections in India, Washington should be ready to facilitate comprehensive dialogue between India and Pakistan.

Arif Rafiq (@arifcrafiq) is president of Vizier Consulting, LLC, a political risk advisory company focusing on the Middle East and South Asia. He is also an editor of CPEC Wire, a digital platform dedicated to monitoring and analyzing the China-Pakistan Economic Corridor.

Image: An artificial flower is seen on a turban of a peace marcher as he arrives in Kabul, Afghanistan June 18, 2018. REUTERS/Mohammad Ismail