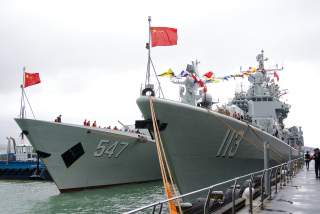 How It Could Still Go Wrong

In light of this, what could occur that would halt China’s growing dominance in the region? While President Xi’s efforts to continue building his close relationship with Duterte are currently serving China well, there is potential for this to backfire. The Filipino public does not share Duterte’s effusive stance on China and President Xi. Filipino legal experts have warned Duterte that he faces impeachment risks if he does not adopt a tougher stance on China (one opposition legislator has in fact already filed an impeachment claim) and leading political figures have cautioned Duterte to reverse his obsequious rhetoric regarding Chinese encroachment. Despite his penchant for ignoring criticism, Duterte may be forced to succumb to mounting public pressure if China fails to temper its stance. A crucial decision looms for Xi in this regard. China’s new seasonal fishing moratorium within the nine-dash line could be the tipping point that causes the Philippines to step away from its current ties with Beijing. Then, if the Trump administration is savvy, the United States would have an opening to rejuvenate the Manila partnership. This could provide the cornerstone around which the United States can then build a successful counterbalancing strategy to China in the South China Sea.

For now, President Xi is winning in the South China Sea. The future direction of the territorial contest is largely dependent on whether Xi maintains his successful pursuit of two-track diplomacy as well as his ability to avoid clearly crossing major red lines. Beginning construction projects on the Scarborough Shoal, for instance, could be the catalyst that would lead to the formation of an international coalition able to halt China.

Nicholas Lyall is a research officer at the Australian National University where he works at the National Security College as well as for the university’s Pacific studies program. His main topics of interest are Russia and China, especially cyber statecraft and maritime security as related to both countries. His recent published works relate to Russian hybrid warfare, primarily with regards to current tensions with NATO.