Will the Syria Conflict Continue to Escalate? 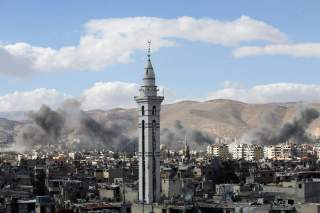 In early February, western media reported that the United States had led a strike on the Russian mercenaries of Wagner PMC. The number of casualties was constantly changing; Bloomberg News reported hundreds, the Russian Foreign Ministry announced a smaller number and noted that “Russian citizens” were injured.

Clearly, the battle was for oil and gas resources in the Deir-ez Zor region, which were not supposed to fall into the hands of the opposition and the Kurds in particular; this flows from the logic of restoring Syria under President Assad. Iran and Russia specifically are holding this position. This reasoning is understandable—the leadership of whoever controls these resources will set the tone for negotiations.

But now, with an open conflict underway, the Kurds are perceived by a number of parties as an integral part of the Syrian opposition. At the same time, Assad does not intend to leave the presidential post. And he cannot. He is the guarantor of the presence of Russian forces on the territory of an Arab country and of Iran’s “Shiite Arc” project. In addition, the departure of the victorious president would undermine the morale of the army, and a new wave of escalation could tear the country to pieces. Indeed, the proud Syrian Army believes that its own role has been more important than that of Moscow or Tehran.

There is also another reason. Russia may be interested in establishing a military base in the Deir-ez Zor area to monitor the actions of the United States in neighboring Iraq and, at the same time, to keep a finger on the “pulse” of Iranian projects, among other purposes.

The tactical plans of Damascus, Moscow, and Tehran coincide with Ankara’s position. Absorbed by the fight against the Kurds, Erdogan is ready to develop relations with Iran and Russia. And what choice does he have? Already entangled in this conflict, the Turkish leader cannot get out without disastrous consequences. Therefore, at this stage, he needs those allies who if they do not support his actions at least would not interfere and condemn. However, one must understand that once the sensitive issues are closed, the “paths” of these ad-hoc allies will part.

Now there is fresh information about the apparent transfer of the new generation Russian fighters SU-57 to the Hemeimeem air base, at least Israeli intelligence indicates that this is the case. At the same time, the Rex News, referring to the Syrian media, reported that Russian fighters have already struck East Ghouta in Syria, which resulted in the deaths U.S. soldiers who operated as so-called private military contractors. There are also unconfirmed reports that Saudi forces are under attack.

The information is not confirmed. The Syrian press can intentionally exaggerate. However, the transfer of jet fighters can indeed lead to serious consequences.

Russia and the United States Are Doubling Down

In the meantime, it is obvious that the battle for Syria is in full swing. The Americans set the main mission: not to allow Iran to gain a foothold in the region with the help of Syria. Fears are clear. Relations between Washington and Tehran are far from improving. The strengthening of Iran might cause a chain reaction in the region, provoking actions from Saudi Arabia and Israel. But most importantly, the strengthening of Iran can lead to unpleasant geo-economic consequences for the United States.

The European Union is very much open to buying Iranian oil and, in the main, gas. The U.S., in turn, is suggesting its European partners restrain their appetite and settle for American liquefied gas. In the case of Iran’s “victory” in Syria, Brussels would quickly restart relations with Tehran.

That is why the European Union’s view on what is happening in Syria is rather ambiguous. European leaders shifted from their chorus of “Assad must go” to more restrained rhetoric.

The United States cannot avoid worrying about Russia’s strength if the Syrian crisis is resolved in favor of Moscow and Tehran, whose interest is in maintaining Assad as president. Russian military bases and Moscow’s generally increased influence in the Middle East can seriously alter the established rules of the game.

Both Russia and the United States have interests at stake. In this case, direct confrontation between the Russian and American military is most improbable. Instead, bets will be placed on local forces, with their subsequent development as players within the framework of a big chess game. It will not be Third World War, but the disputes between various countries and forces could serve as its precursor.

Who Is against Whom?

At the moment, the nation that can create the most stable regional coalition of like-minded people can emerge the victor. Apparently, Washington is now actively working with Turkey. However, it is unlikely that the parties will establish better relations, since the U.S. is not ready to abandon the Kurds.

Saudi Arabia is also playing an important role. That is why the diplomatic struggle for Riyadh was taking place. Iran was offering to its long-standing antagonist a joint work in connection with Iraq. The Russian president discussed with Saudi King Salman the situation in Syria. However, if the information of the Syrian media about the fact that Russia has carried out a strike is true, then the pro-Saudi forces were affected by it as well. This would significantly change the compromise achieved with the kingdom.

As for Israel, it clearly marked its red line. On February 10, the Israeli Air Force attacked 12 Iranian and Syrian installations in Syria, including air defense systems. Pentagon spokesman Adrian Rankine-Galloway said that the U.S. fully supports the actions, but added that the U.S. was not involved in this operation.

In addition, a new wave of the Syrian crisis leads to the idea that it is quite possible that a sudden worsening of the North Korean problem would draw the attention of both China and Russia.

Ultimately, the Syrian crisis remains unstable and is provoking both an arms race and new conflicts in the world. Even if there is no direct conflict between Russia and the United States, such a chain of events could be quite unpredictable. Are we ready for such era? Maybe the leader or nation that is prepared to step back today in Syria will show not weakness, but wisdom?