Will the Trump Team Make a Power Play at the United Nations? 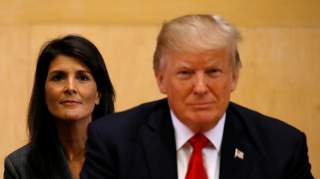 It’s that time of year again, a time when diplomats and heads-of-state in fancy suits from around the world all fly into New York City, ready to give inspirational speeches about the virtues of world peace and the importance of economic development. The UN General Assembly’s general debate is like Christmas time for aspiring negotiators. It is an opportunity for the up-and-comers to make a name for themselves and build connections with fellow diplomats that will hopefully last a lifetime. Also, it is a period for senior officials who may be new to the world of international diplomacy (i.e. Secretary of State Rex Tillerson and U.S. Ambassador to the United Nations Nikki Haley) to convince their colleagues that they are serious people, doing serious things.

Over the normal course of business, the General Assembly debate would be a rather placid—even boring—affair. The hours-long, bizarre and somewhat entertaining diatribes from the likes of Fidel Castro, Hugo Chavez and Muammar el-Qaddafi died along with them, so don’t expect any yelling, screaming, or pounding of fists on the podium this week. These sessions resemble political infomercials in which statesman take to the stage and provide their best sales pitch to the international community. Think of the talk-a-thons in the U.S. Senate, but on a global level.

This year’s general debate, of course, will be different. Barack Obama, the man who espoused internationalism and prided himself on being a multilateralist who worked within the UN framework, is long gone—replaced by Donald Trump, a man who isn’t especially happy with how the global body operates. Trump doesn’t like how much money the U.S. taxpayers are pumping into the system and he is unhappy with the topics that UN bureaucrats choose to focus on (Israeli settlement building, climate change, poverty reduction, etc.). Trump made his thoughts on the UN quite clear, as he always does, on Twitter. In December he said, “The United Nations has such great potential but right now it is just a club for people to get together, talk and have a good time. So sad!”

The feelings emanating from the boss have trickled down to the Trump national-security team as well, led by Ambassador Nikki Haley, who takes pride in slashing Washington’s contributions to the peacekeeping budget and warning other countries to shape up. UN Secretary-General Antonio Guterres, however, should consider himself lucky, because it could have been a lot worse. The White House, for instance, could have enacted its draft executive order that would have cut U.S. funding to international organizations by 40 percent.

One can only guess what President Trump will say in front of all of these foreign delegations. You could reasonably expect that he will focus on the menace that is Islamist terrorism to western civilization; Iran’s destabilizing behavior in the Middle East and its repeated violations of UN Security Council resolutions; and Kim Jong-un’s development of a nuclear-tipped ICBM.

But Trump’s remarks to the UN are not the most important aspect of the General Assembly meetings this week. Even more vital for U.S. foreign policy is how Trump, Secretary Tillerson, Ambassador Haley and any other State Department or White House official who travels with them to New York spends their time on the sidelines. What issues will they hammer home? Will they devote resources and attention to the informal conversations that are held on the sidelines of committee meetings, or will they disengage as soon as President Trump finishes his speech?

There are so many pressing issues on Washington’s foreign-policy plate right now that one would certainly hope that the Trump administration would spend its time at the UN wisely. It’s perfectly legitimate to criticize and seek to reform the UN bureaucracy and cut down on America’s annual financial contribution to the organization. But it would be incredibly foolish if the Trump team wrote off the entire week as a chore or a ceremonial ritual; the UN is the best format that the United States (and indeed any country) has at its disposal to brainstorm collective solutions to intractable problems that require a global response.

The General Assembly debate comes roughly a week after the Security Council passed its ninth round of economic sanctions on North Korea, a measure that not only prohibits imports of North Korean textiles but caps the amount of crude oil and refined petroleum that the Hermit Kingdom can import every year. While President Trump has referred to this Security Council resolution as a small and not-so-big deal, beggars can’t be choosers. This is the best Security Council product on North Korea that the Trump administration is likely to get for the time being, assuming that Kim Jong-un doesn’t have plans for sending a salvo of intercontinental ballistic missiles to Guam or blowing a seventh nuclear explosive. Trump ought to leverage that resolution as best he can, meeting with the Chinese and Russian foreign ministers on the sidelines in an attempt to reconcile the still significant gaps that separate Washington, Beijing and Moscow on the North Korea issue. China and Russia may never be prepared to support a full oil embargo as the White House originally pushed for, but they may be flexible enough to quibble with the caps that are now on the books.

The bilateral U.S.-Russia relationship also needs some work, and what better way to begin stopping the downward spiral than at the UN? Despite Moscow’s earlier insistence on a full normalization of relations, the anti-Russia animus in Washington right now is such that forgiving and forgetting Putin’s military support to separatists in eastern Ukraine is an impossible move for any American politician to make. Nor is it smart policy; the Russians want normalization with the United States about as much as Lt. Gen. Michael Flynn wants immunity from Special Counsel Robert Mueller. Moscow, put simply, doesn’t deserve normalization, as if its interventions in Ukraine, Syria and the U.S. presidential election didn’t happen.

This, however, shouldn’t exclude Tillerson, Haley, and maybe even Trump himself from exploring avenues of cooperation with their Russian colleagues when such cooperation happens to be available. Putin, for example, has offered an out-of-the-blue proposal to the Security Council that would authorize UN peacekeepers to assist Organization for Security and Co-Operation in Europe monitors in observing a truce between Russian-backed separatists and Ukrainian troops in Donbass. Putin’s peacekeeping gambit could either be a legitimate effort to solidify a ceasefire that has been broken hundreds of thousands of times over the last three years, or a clever attempt at diversion to split the European Union. We won’t know for sure until U.S. officials engage with the Russians on the proposal and take their temperature, and a face-to-face meeting senior U.S. and Russian officials is precisely the time to do it.

President Trump may not appreciate or respect the UN as an institution. But for a guy who thrives on striking the headline deal—and for a president who still has a lot to proof to his fellow statesmen and stateswomen—the UN General Assembly is the best opportunity for Trump to break out.