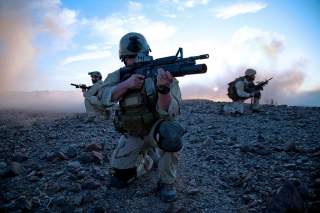 The first military operation President Trump authorized, over dinner, was a troubling failure. It killed thirty civilians, including ten children and women. It cost the life of Navy SEAL William Ryan Owens, injured three other fighters in his unit and an additional three members were injured when an MV-22 Osprey crash landed. It pushed the local tribes—including those that supported the United States in the past—toward aligning themselves with Al Qaeda. And it once again showed the U.S. military’s weakness in special-operations warfare.

Before I proceed, I should note that I was trained for one year as a Special Forces combatant (though in my day, they were called commandos), and I was involved in close combat for two and a half years. (That experience includes two short periods when there was a ceasefire.) I mention this because the following is not merely based on publicly available information, but also on personal experience.

If the Democrats in Congress were not shell-shocked by the bombardment of executive orders, and if they were able to hold the kind of investigation and hearing the Obama administration was subjected to over the loss of the lives of four American lives in Benghazi, then here are the questions they should have raised specific questions about the recent Yemen raid. Those questions demand answers before we attempt more of these operations.

David Sanger, a highly regarded New York Times reporter, stated on television that the decision to launch the strike in Yakla by the Trump team did not follow the usual procedure. There was no meeting in the situation room. In the past, that meeting would have included detailed reports about planned operations, discussions about the goal of the operation, presentation of a risk assessment to U.S. troops and local civilians, and an overview of the legality of the operation. Instead, the matter was decided during dinner conversations by people like Stephen Bannon, Trump’s leading political consultant.

Hence, the first two questions that must be raised are: who briefed the president, and what did that person say? Did they call his attention to the fact that killing a few terrorists, especially when civilians are involved, often increases the number of terrorists the United States and its allies must contend with? (Former Secretary of Defense Donald Rumsfeld was wary about the United States creating more terrorists than it was killing.) What were the reasons given for why Special Forces were used instead of drones? Was the president told that killing Al Qaeda operatives in Afghanistan in similar raids involving drones had helped to suppress Al Qaeda (at least for a while)? That success was not achieved by a few sporadic raids, but by many raids, which took place one after the other.

One may even wish to know—given Trump’s reported limited attention span and distaste for intelligence briefings—whether the president listened to the entire briefings (if any were made), or if he cut them short. Maybe future briefings should be made in the form of videos and presented on a TV screen? Did the president rely, as he often states, on his gut feeling and sense that he instinctively knows everything he needs to know, better than all others?

Al Qaeda combatants were forewarned about the attack. As a result, the important element of surprise was lost. In most armed conflict situations, the conditions favor the defense because combat occurs in its territory. The defense is already familiar with the area, dug in and able to access short supply lines. The major factor that favors the attack is that the defense does not know when and how the position it defends will be attacked. This is especially true in commando raids when small forces attack a larger force far away from the attacker’s base. Here, loss of surprise is particularly detrimental. (Two operations in which I participated were aborted once we lost the element of surprise.) One needs to establish, regarding the raid in Yemen, how Al Qaeda found out about the looming operation. Was it because U.S. command decided to include some local troops? Was it because of heightened drone activities over the target, which served as a telltale sign that an attack was forthcoming? If so, then surely one will want to know who made such an elementary mistake in executing the operation.

Claiming that the raid was largely successful, administration sources stressed the value of the intelligence that the United States gleaned from material collected at the site. However, NPR reported, “A terrorist video released on Friday by the Pentagon to show what it called intelligence gleaned by the recent raid in Yemen actually was made about 10 years ago, it acknowledged.”

Speaking more generally, the United States has small teams of Special Forces in at least thirty countries in Africa and the Middle East. There is a naïve assumption that those teams can engage in “capacity building” and help the locals build up their military forces to a level that allows them to fend for themselves. A Pentagon official explained to me that one of the most important missions of these teams is to curb corruption. This is important because a good part of the monies allotted to the various local military forces ends up in the pockets of the generals and lower-ranking officers—to the point that troops are often sent to fight with little ammunition and limited amounts of food. It is hard to imagine how a Navy SEAL team, well trained in the art of killing, would be able to get the locals to curb corruption. Fifteen years of such efforts in Afghanistan and Iraq, which has required a large-scale U.S. involvement, shows how futile such drives can be. The raid in Yemen should serve as opportunity to ask the greater question: should the United States demonstrate weakness by being involved in the unsuccessful buildup of various nations, withdraw its forces from those nations or engage on the level success requires?

Also, one must ask where the Yemen raid fits into a general strategy of dealing with Iran, which is helping to destabilize Yemen. Should the United States tackle the rising power via various proxies in Syria, Iraq, Lebanon and Yemen—or confront the beast head on?

Amitai Etzioni is a University Professor and Professor of International Relations at The George Washington University. His latest book, Foreign Policy: Thinking Outside the Box, was recently published by Routledge.