Will Trump and Kim Make History? 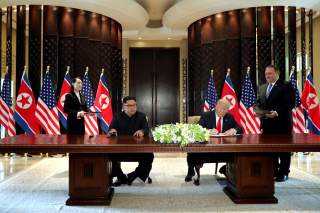 For most Korean people, 2018 is much better than 2017. Although many Koreans still doubt Kim Jong-un’s real intention, nobody denies that this year is more peaceful than last year. Indeed, there has been a new shift on the Korean Peninsula in 2018. North Korean athletes and delegations attended the PyeongChang Olympic Games, and the unified Korean team of women’s ice hockey made the Olympic Games as a game of peace. As a result, the South Korean president’s special envoys visited Pyongyang, which led to the inter-Korean and U.S.-North Korean summit meetings. In fact, summit diplomacy on the Korean Peninsula was not expected in 2017. President Donald Trump used to say he would like to “maximize pressure” on North Korea in a variety of national strategy reports such as National Security Strategy of the United States of America (NSS), National Defense Strategy (NDS), Nuclear Posture Review(NPR), and his own State of the Union address. North Korea declared the completion of the nuclear deterrent against the United States after its 6th nuclear test in September and launching the Hwasong-15 rocket rated ICBM in November 2017.

After Kim Jong-un called for a new transformation of inter-Korean relations in his New Year’s Address, however, Pyongyang participated in the PyeongChang Olympic Games and met with U.S., Chinese and South Korean presidents. Kim mentioned in his New Year’s Address, “Through inter-Korean contacts, cooperation and exchanges, it is necessary to solve misunderstandings and mistrusts. If we really want national reconciliation and unity, we will open the way to dialogue and contact.”

From the beginning of 2018, North Korea has been trying to change its course of action in the Korean Peninsula through a new charm offensive. The South Korean government responded quickly to North Korea’s changed approach, and the Trump administration also showed new policy changes by accepting the first U.S.-North Korean summit in history.

Incompleteness of the “Complete Denuclearization”

President Moon Jae-in and Chairman Kim Jong-un have had three summit meetings this year on April 27, May 26, and September 18-20. The Panmunjom Declaration in April and Pyongyang Joint Declaration in September embodied Two Koreas’ peace initiative as advanced declarations compared to the former two summit meetings in 2000 and 2007. They included tremendous policy changes between the two Koreas, discussing the denuclearization, disarmament, declaration of an end to the war, and peace treaty that were not covered in 2000 and 2007. Two Koreas agreed in detail on the development of inter-Korean relations, the resolution of war risks and the establishment of a peace regime on the Korean Peninsula as well as humanitarian exchanges and economic cooperation. In particular, they reaffirmed the “end of military hostilities” and “inviolability obligations” from the previous agreements, mentioned the declaration of the end to the war within this year and the conversion of the armistice treaty into a peace treaty in order to build “a permanent and lasting peace regime.” Regarding the denuclearization, “the South and the North have confirmed the common goal of realizing a nuclear-free Korean Peninsula through complete denuclearization.” In fact, it can be regarded as a tremendous progress in the inter-Korean relations, considering that North Korea was reluctant to discuss the nuclear issue with South Korea.

Is Trump Dealing with North Korea or the Korean Peninsula?

The Trump administration’s global strategy is quite a challenge to the Korean Peninsula. First of all, Trump’s retrenchment or isolationist strategy initiated by the “America First” policy was also revealed in the Trump-Kim summit meeting. He implied in Singapore the possibility of a new change in the U.S.-ROK alliance with the weakening of the U.S. security pledge on the Korean Peninsula. As President Trump emphasizes in his “America First” policy, the United States is more likely to relocate U.S. troops and resources dispatched overseas. It can raise not only the status of U.S. military presence in Korea, but also the possibility of the additional burdens on South Korea’s contributions to the USFK. As a result, South Korea will face considerable difficulty in operating the future U.S.-ROK alliance.

Although Trump’s intention on the U.S.-ROK alliance was not shown in the Trump-Kim Joint Statement, Trump showed clearly in his press conference how his global retrenchment strategy can be applied to the Korean Peninsula. At the press conference after the summit, President Trump said he would stop the joint exercise. He said that he would not cut U.S. forces in Korea, but declared that he would halt the “War Games” if negotiations with North Korea continue. President Trump said he would like to withdraw the U.S. forces in Korea, but he would not do it right now. However, referring to stopping “war games,” he suggested the possibility of stopping or reducing the U.S.-ROK joint exercises, and he really stopped the joint military exercise this summer. He mentioned, “We will be stopping the war games, which will save us a tremendous amount of money, unless and until we see the future negotiation is not going along like it should. But we’ll be saving a tremendous amount of money. Plus, I think it’s very provocative.” In Singapore, Trump was thinking about a negotiation card not only for North Korea but also for South Korea. President Trump also raised the issue of South Korea’s contribution to the USFK when President Moon visited him in September to discuss the Pyongyang Joint Declaration and the denuclearization issue.

On the other hand, the great-power rivalry may be resurrected between the United States and China in Northeast Asia while Trump deals with the North Korea issue. China has already vigorously criticized the Trump administration’s global-security strategy and his view on China. China criticized U.S. strategy against China, saying that Trump has a Cold War mentality. From the Chinese point of view, “America First” means that the United States will return to the Cold War period. The tensions between the United States and China must have a profound effect on the peace of the Korean Peninsula.

In fact, the great-power rivalry poses a great risk to the Korean Peninsula. President Trump’s perspective on China revealed in the Singapore press conference was not really positive. When he talked about the sanctions on North Korea, he suddenly referred to trade unfairness with China and claimed that the United States was being used by China. In particular, he pointed out that trade negotiations with China could affect the implementation of sanctions on North Korea. In fact, President Trump announced that on June 15, shortly after the Trump-Kim summit, he would impose a $25 billion and a 25 percent tariff on Chinese commodities. China, of course, resisted Trump for starting a trade war. It shows that there is a high possibility of tension between the United States and China on the Korean Peninsula. After Kim Jong-un’s second summit with Xi Jinping before Trump-Kim summit, President Trump did not hide his discomfort in China’s intervention. Improvements in U.S.-North Korean relations are not necessarily good news for China. Although China also wants North Korea to denuclearize, changes in U.S.-North Korean relations can be a great challenge to China’s regional strategy. Therefore, if the U.S.-North Korean relationship improves in the future, then there is a high possibility that the U.S.-China rivalry may deteriorate further in the region.

Third, Trump’s emphasis on the importance of nuclear weapons in U.S. global-security strategy may accelerate the nuclear arms race in East Asia. The Trump administration said in its Nuclear Posture Review report that Russia and China are the most pressing security threats, and that the U.S. nuclear standoff to respond to these nuclear weapons should also be changed. If the negotiation on the denuclearization of North Korea progresses, there is a possibility that North Korea raises the American nuclear issue on the Korean Peninsula. However, U.S. nuclear posture will remain the same in the future, especially regarding toward China and Russia. America’s nuclear umbrella on the Korean Peninsula may change, but its nuclear strategy toward China and Russia is less likely to change. As a result, the North Korean nuclear crisis may be over, but the nuclear arms race may emerge in East Asia.