Will Trump Be Israel's Redeemer? 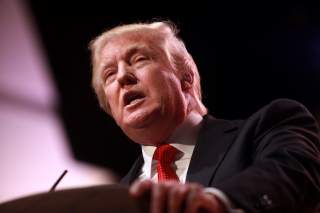 Having steered his new administration, with record speed, into scandal and dysfunction, Donald Trump is now on his first foreign trip as president. He sets down today in Israel, his second stop after a weekend in Saudi Arabia. The Israeli Right, in firm control of the country, heralded Trump’s surprise election as the coming of another Cyrus the Great, Persian redeemer of the Jews and sponsor of the repatriation to Israel of the Babylonian captivity. But the American president that Israelis are welcoming today is not quite the savior from Obama-era discord that many of them had hoped for.

Trump himself encouraged that hope, as when—one month after his election and one month before his inauguration—he tweeted: “Stay strong Israel, January 20th is fast approaching!” But there are three fundamental problems with this notion of Trump the Redeemer. First is that the belief that difficulties between Washington and Jerusalem during the Obama years stemmed from his innate hostility to the Jewish state never really reflected reality. Second, the difficulties that did arise stemmed from legitimate differences about the best way to deal with strategic challenges faced by both states. Third, was the growing sense of shared identity, policy preferences and worldview between the Republican Party and Israel’s government and the consequent shift of the U.S.-Israel relationship from a bipartisan concern to a political football.

The myth of Obama’s hostility is refuted by his administration’s record. During those eight years, U.S. security assistance to Israel broke all previous records, and the administration’s rhetoric was rococo in its pledges of admiration and support for America’s muscular protégé in a tough neighborhood. Where the Obama White House disappointed Israel was in its modest proposal that the future borders of an Israeli and Palestinian state be based on the June 1967 ceasefire lines, which merely recapped preexisting U.S. policy; in its request that Israel freeze settlements on the West Bank; and in its determination not to start a war with the Islamic Republic of Iran but rather to curtail its nuclear aspirations through a negotiated multilateral deal. In other respects, the United States was prepared to back Israel’s demand that the Palestinians re-recognize Israel, this time as a Jewish state, and to go all out to defeat a Palestinian campaign for recognition by the UN General Assembly. In the twilight of Obama’s second term, the administration did abstain from vetoing an even-handed UN Security Council Resolution condemning settlements, but this merely affirmed U.S. policy going back to the Reagan administration. Nevertheless it precipitated vehement reactions from both Trump, who immediately tapped out his “stay strong” tweet, and Prime Minister Benjamin Netanyahu, who attempted to cast a U.S. abstention on a resolution with no practical implication as a sinister “conspiracy.”

It is true that Washington stunned counterparts in Israel by recognizing free and fair elections in Egypt that produced a Muslim Brotherhood government. Yet that government, headed by the now-jailed Mohamed Morsi, seemed to work pretty well with Jerusalem through crises in Gaza and Sinai, despite underlying animosities. Morsi’s overthrow in a majoritarian counterrevolution and coup caused uncomfortable murmurs in Washington, but the Obama administration, to the irritation of its political base, did not disrupt cooperative relations with the new regime of Abdel Fattah el-Sisi, although there was some grumbling after the Rabaa massacre. After Syria’s Bashar al-Assad irrefutably used poison gas against civilians in 2013, some Israelis were disappointed by Obama’s embrace of diplomacy to disarm the regime of 1,300 tons of chemical weapons rather than resorting to the kind of pinprick air attack that Trump would later launch. But Israel’s quiet decision to suspend its civilian gas mask distribution program told another story. Since then, Syrian airspace has been a free-fire zone for the Israeli air force, which, on the whole, has not been such a bad outcome for Israel’s security interests.

Given the apparent continuities between two administrations differing in temperament, structure and style, what’s new?

The distinctive theme of Trump’s trip can be inferred from his itinerary: first Saudi Arabia, then Israel. It must be inferred because it is not clearly articulated. But there has been a convergence of vision between those in the United States favoring a more confrontational approach to Iran, Israeli strategists and Sunni Arab leaders around a common front against Iran. In one somewhat wistful sense, this inchoate doctrine is a variation on an older theme, the longstanding dream of a Middle East in which the Jews are integrated as a valued partner for the Arab world. Its original utopian, if Orientalist, image harks back to early in the twentieth century, when British Zionists—David Lloyd George, Winston Churchill, T. E. Lawrence, Arthur Balfour—saw Jewish settlement of Palestine as the leavening for a vibrant, Westernized post-Ottoman Arab world. It’s a history whose persistence has been matched only by the disappointment it has radiated over the past century.

In its Trumpian incarnation, the humanistic impulse underpinning the notion of intercommunal comity has been replaced by a tougher, more explicitly strategic concept. In this twenty-first century version, a Sunni Arab world governed by hard-nosed leaders and inspired by a creative young Saudi elite, eager to throw the old rulebook out the window, is newly prepared to publicly acknowledge its shared interest with Israel in humbling an aggressive Iran. This inverts another myth about Obama, who allegedly counted on the nuclear deal to assimilate Tehran into a peaceful regional order. In the inverted vision, public acknowledgement of a shared Israeli-Arab interest in rollback of Iranian influence will ultimately lead to the incorporation of Israel into the regional system.

Yet problems with this vision start with the American role in any putative anti-Iranian coalition. It seems unlikely that Trump will withdraw from the nuclear agreement. There is a multitude of sanctions bills left over from the 114th Congress and in play in the 115th that can be used to make life economically difficult for Iran despite the sanctions relief provided by the JCPOA. This is an area where Israel, Saudi Arabia and the UAE could lobby both the administration and Congress. But all in all, the Trump strategy so far doesn’t look very different from Obama’s approach to the Iranian challenge. And with Rouhani’s reelection, dismantling the JCPOA will be resisted by European governments, not to mention Moscow and Beijing, in the absence of incontrovertible evidence of Iranian cheating or a breakout attempt.

Defense Secretary James N. Mattis’s most recent press conference made it abundantly clear that U.S. forces were not going to be targeting Iranian assets in Syria, let alone the Assad regime. An armed Iranian or Hezbollah presence on the Syrian side of the Golan would of course be an extremely serious concern for Israel. In theory the US could help counter it, but only by working with Russia, a problematic option, since the US abjures contact with the Syrian regime and of course with Iran. On this issue, Israel might be better off dealing with the problem on its own, via Moscow, or by firm slapdowns, as in January 2015 when Israeli fire killed an IRGC general and senior Hezbollah official loitering at Mazraat Amal, in proximity to the Golan. Nor does anyone imagine that the United States would get in Israel’s way should new hostilities break out between Israel and Hezbollah. On other fronts, U.S. assistance to anti-Houthi operations in Yemen is still constrained primarily by the high cost in noncombatant lives exacted by Saudi military operations. Overall, the U.S. military presence in the region remains robust—certainly enough to deter Iranian aggression against the states on the Arab side of the Gulf, to whom the United States has been committed since the Carter Doctrine was enunciated in 1979 and, arguably, since the British flag was lowered east of Suez in 1971. And despite the resulting controversy, Washington maintained close ties to Bahrain even in the darkest days of repression during the Arab Spring. There isn’t much about this U.S. posture today that looks much different from the Obama era.

The Arab-Israeli side of the notional alliance against Iran carries its own complications. At present, both the Saudis and Emiratis are getting all the sub rosa security cooperation that Israel is prepared to provide—and vice versa. One wouldn't expect either side to pay for something it is already getting for free. And the price for a more normalized relationship would presumably not be trivial. The Arabs would expect Israel to halt settlement activity; Israel would ask the Arabs for tangible, high-profile concessions that indicate tacit recognition, at a minimum. So far, only modest concessions have been mooted: direct telephone communications, the opening of Emirati airspace, and establishment of an Israeli business presence in the Gulf states. It is hard to imagine the cabinet in Jerusalem freezing settlement activity in return for such limited benefits, just as it is hard to see the Arabs going down this road in the absence of a serious settlements freeze and evidence of a revived peace process. If, as has been suggested, these reciprocal steps would be phased in a way that starts small but, as mutual confidence mounts, yields recognition, the process is likely to be asymptotic and would breed more resentment than affection.