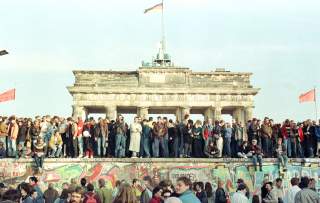 To be sure, in a brilliantly provocative new book called Wir Brauchen den Westen (The World Needs the West), Thomas Kleine-Brockhoff, a former aide to German president Joachim Gauck and the head of the Berlin office of the German Marshall Fund, argues that it would be mistaken to assume that German-American relations cannot assume a rosier aspect and that Western liberalism, far from being a spent force, can make a rousing comeback. He points to the crisis that America found itself in during the mid-1970s, when Richard Nixon resigned from the presidency, left-wing terrorism was on the upsurge, OPEC launched an oil embargo and the American economy fell into a recession. “Who,” Kleine-Brockhoff asks, “would have bet on a golden future for America? Only fifteen years later the wall fell in Berlin and the United States stood at the zenith of its power and reputation.”

BUT THE tensions between Europe and America would likely become far more pronounced if Donald Trump were to win reelection. In far more vivid form than the George W. Bush administration, Trump has, in effect, attempted to treat with “new Europe” at the expense of “old Europe.” Indeed, in his inimitable fashion, Trump has sought to form a de facto alliance with countries such as Poland and Hungary on the basis of perceived common cultural ties. In 2017, for instance, Trump delivered a bombastic speech in Warsaw hailing the Polish government’s championing of “civilization” against the twin threats of the EU and refugees. It was imperative, he said, for nations to safeguard their “culture, faith, and tradition.” He has not displayed as much interest in traditional ties between America and Europe. Quite the contrary. In 2018, he apparently mooted on several occasions waving auf Wiedersehen to NATO. In this regard, Trump is returning to an older Republican tradition of maintaining a distance from European quarrels that supposedly have no direct bearing on America. The result could be nothing less than the fracturing of the Western alliance.