Will Trump Go to War with Iran? 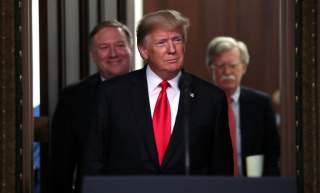 Unusually, for a procedural move, the president himself got in on the action Monday, casting the maneuver, as he is wont to do, in more personal terms: “Saudi Arabia and others in OPEC will more than make up the Oil Flow difference in our now Full Sanctions on Iranian Oil. Iran is being given VERY BAD advice by @JohnKerry and people who helped him lead the U.S. into the very bad Iran Nuclear Deal.” Donald Trump tweeted. Will they and is it?

The president added that former Secretary Kerry’s machinations could be a “big violation of the Logan Act,” an eighteenth-century law that’s gained renewed currency in the Trump era.

“If Trump wants to avoid the mistakes of George W. Bush in the Middle East, he's following the wrong playbook with Iran,” Ryan Costello of the National Iranian American Council told me Monday morning. “With few results and time running out for Trump's pressure track, Bolton and his backers are burning through all of the sanctions options that they have, with the only concrete result a more intractable Iran.”

For the Trump administration, as Secretary of State Mike Pompeo said earlier this year, America is back in the Middle East—and taking sides. “It is a truth that isn’t often spoken in this part of the world, but I’m a military man by training, so I’ll put it bluntly: America is a force for good in the Middle East. Period,” America’s chief diplomat said in Cairo in a landmark speech in January.

Logistically, Pompeo’s vision has meant favoring the majority faction of the Gulf Cooperation Council (GCC)—specifically, the acute leadership of Mohammed bin Zayed in Abu Dhabi, as well as the more controversial strongmen Mohammad bin Salman in Riyadh and General Abdel Fattah al-Sisi in Cairo. The White House noted who its friends are Monday, and echoed the president’s assurances that global energy markets wouldn’t be rocked. “The United States, Saudi Arabia, and the United Arab Emirates, three of the world’s great energy producers, along with our friends and allies, are committed to ensuring that global oil markets remain adequately supplied,” Sanders said.

This is a delicate situation for the president, who in two-plus years has already levied an unusual amount of pressure on global energy producers to keep prices low; this Iran policy seemingly flies in the face of that tact. Crude shot up to six-month highs Monday. Russia and Saudi Arabia, among others, are happy.

But Monday’s announcement was no obvious victory for Pompeo—instead, more of an untrammeled triumph for Bolton, the hawk par excellence. Pompeo was widely reported to have been pushing behind the scenes against a move such as this, favoring instead a more graduated course. He lost. “If the administration continues implementing Bolton's plans unchecked, a renewed nuclear crisis or direct military confrontation risks becoming unavoidable,” argues Costello.

A former senior administration official close to Pompeo says that come 2024, the secretary will seek the presidency. Bolton and Pompeo remain allies but their interests are not congruent. As the perspicuous Thomas Wright of Brookings noted last year: “For Bolton, this is his last and best chance to achieve his ideological goal of demonstrating that the United States is free of legal and institutional constraints. For Pompeo it is a means to a bright political future.”

Indeed, daylight between the two was revealed in leaked comments over the weekend. “Let's not beat around the bush,” Pompeo told a group of Iranian exiles in Texas, per Axios. “Ambassador Bolton spoke at an MEK rally. President Trump and I have not.”

Pompeo was, of course, alluding to the controversial People’s Mujahideen of Iran (MEK). The president’s lawyer, Rudolph Giuliani, told me last fall at an event affiliated with the MEK that the administration’s policy was effectively regime change.

For her part, the group’s leader, Maryam Rajavi, celebrated Monday’s decision. Her “resistance,” she noted, has “been demanding the imposition of an oil and arms embargo on the mullahs’ anti-human, anti-Iranian regime since 4 decades ago.”

The MEK is on a roll. So was Ahmed Chalabi over a decade ago.