Will Trump Ignore a Visit from the President of Nagorno-Karabakh? 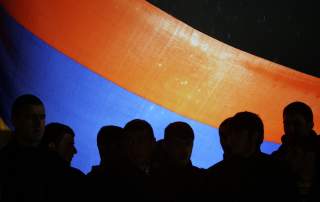 In 451 A.D., Armenian warriors, having just lost a fierce battle with the superior Persian Empire, retreated into the forests of Artsakh in the South Caucasus. They had lost the war, but preserved their Christian faith, and thus considered it a victory. Armenia was the first nation to embrace Christianity, in the year 301.

In 2018, a small but determined Armenian democratic republic, the Republic of Nagorno-Karabakh (or “Artsakh,” as Armenians call it) is attempting to survive, threatened by a militarily superior power that wishes to crush it. Professor Audrey Altstadt, in her recent article about Azerbaijan did not mention Nagorno-Karabakh, but perhaps ought to have, as the plight of the citizens of that unrecognized de facto state constitutes a serious violation of human rights.

This week, the democratically-elected president of Artsakh, Bako Sahakyan, will visit Washington. He will not be received by the administration, in part because the United States is silent on the question of whether Artsakh should eventually be independent of Azerbaijan, to which it was allocated by Josef Stalin in 1921. Washington does not recognize Artsakh—in fact no country yet does—but President Sahakyan’s predecessor who visited in 1999 and 2002 met with State Department officials at the working level, and there is an unofficial representative of Nagorno-Karabakh/Artsakh resident in Washington. For this visit, Sahakyan will have to be content with meetings on the Hill and a private lunch at the Center for the National Interest.

Along with France and Russia, the United States has been attempting to mediate the dispute between Azerbaijan and Nagorno-Karabakh for more than twenty years. Although the talks, sponsored by the Organization for Security and Co-operation in Europe, have not yet produced a settlement, in the meantime the people of Karabakh have built a thriving democracy based on market principles, free and fair elections and respect for human rights. A fragile cease-fire reached in 1994 under Russian auspices was flagrantly violated in April 2016 when Azeri troops attempted to reverse the victory achieved in the early 1990s by Karabakh Armenians fighting for their right to self-determination as the Soviet Union started to collapse. Nagorno-Karabakh has never in fact been part of modern Azerbaijan except as a part of the USSR, when it was an autonomous region, with the right of secession. Nor was it a part of the short-lived Azerbaijan that briefly existed prior to the establishment of Soviet power in the South Caucasus.

The four-day war in 2016 has changed everything. It was a brutal campaign launched in the middle of the night on multiple sectors of the Line of Contact that divides the Armenian and Azeri forces. Some four hundred casualties resulted before a shaky cease-fire was restored. Azeri forces carried out multiple atrocities, cutting off the ears of an elderly Armenian couple, torturing and mutilating the bodies of Armenian soldiers, and, in at least one case, decapitating them, ISIS-style. These atrocities—some twenty-eight of them—have been documented by the Ombudsman for Artsakh and reported to the UN Commission on Human Rights. The blitzkrieg destroyed what little confidence the Armenians in Artsakh may have had in the peace talks and in Baku’s intentions toward them, which some observers say were tantamount to genocidal.

As I saw with my own eyes when I visited in July after the April 2016 war, the people and the de facto authorities of the Nagorno-Karabakh Republic have built a functioning democracy despite being “unrecognized” by the world. They have demonstrated all the attributes of a state outlined in the Montevideo Convention except the last: the capacity to conduct state-to-state relations. In fact, they do have the capacity; it is only the opportunity that they have been denied. Azerbaijan punishes anyone who visits Karabakh without its consent, so the opera singer Monserrat Caballé, celebrity cook Anthony Bourdain, Washington Post columnist David Ignatius and many others are now on Baku’s “black list.” Full disclosure: I am on that list myself.

According to experts on international law who met recently in Brussels to discuss the issue, the right to self-determination trumps the principle of territorial integrity, which can be invoked only “externally,” that is, in defense of the state against external threats, but not to thwart the rights of an internal minority seeking to exercise its rights. Leaving aside the fact that Nagorno-Karabakh legally seceded from the USSR at the same time as Armenia and Azerbaijan did, there can be no doubt that the conflict with the government in Baku began as an internal one. It is also true that Armenia came to the support of its cousins in Artsakh, as did Armenians from California and around the world. And it has to be said that self-determination can sometimes be exercised within a state, as Quebec has chosen to do within Canada. But when the “parent” state employs violence against what it considers its citizens, it forfeits its right to rule over them, and there arises the question of what has been termed “remedial secession.”

As Professor Paul Williams of the American University Washington College of Law reminds us, there are some seventy active self-determination movements in today’s world. These conflicts, he points out, are “deadly, durable and destabilizing.” They tend to last, on average, about thirty years. But as another international law expert, Alfred de Zayas, points out, self-determination is a form of democracy, and ought to be viewed as a factor for long-term stability.

It is time for the international community to welcome the Republic of Nagorno-Karabakh—Artsakh—into the community of nations. As the deputy foreign minister of Artsakh, Armine Aleksanyan, put it recently at the European Parliament, “Karabakh is a country, not a conflict.” The people of Artsakh just want to live their lives in peace and freedom. Even though the status of the Republic of Artsakh has not yet been finally determined, the people of Artsakh possess, and should enjoy, the same rights as all the rest of us, and ought not to be quarantined by the rest of humanity.

John Evans is a retired U.S. Foreign Service Officer who served as Ambassador to the Republic of Armenia 2004–2006. He is the author of Truth Held Hostage: America and the Armenian Genocide—What Then? What Now?