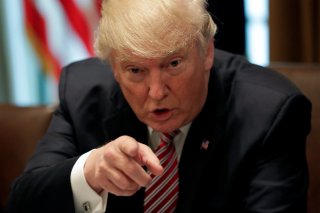 Editor's Note: In our latest Facebook Live interview (please like our Facebook page to see more of these events) Jacob Heilbrunn, editor of the National Interest, sat down with Robert W. Merry, editor of the American Conservative, to discuss the idea of a bloc-based world order, healthcare, the fall of the Roman Republic and more.

Robert Merry recently wrote an article on the best and worst presidents in American history. An excerpt of the article can be found below:

Image: U.S. President Donald Trump talks to the media during his meeting with immigration crime victims at the White House in Washington, U.S., June 28, 2017. REUTERS/Yuri Gripas.