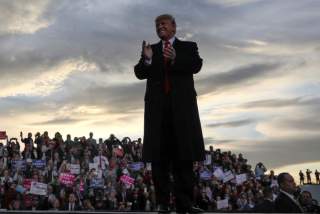 From the outset of his administration, President Donald Trump has emphasized close relations with Saudi Arabia. Together with his son-in-law Jared Kushner, who has a close relationship with Saudi Crown Prince Mohammed bin Salman, Trump has sought to cement ties with the Kingdom of Saudi Arabia in order to help pressure Iran and to ensure arms sales. Now that approach is coming under unprecedented pressure with the apparent murder and dismemberment at a Saudi consulate in Istanbul of Jamal Khashoggi, a columnist for the Washington Post. Turkey says that it has audio and video of a fifteen-member Saudi team perpetrating this crime.

Far from subsiding, the Khashoggi affair continues to trigger outrage in the United States and abroad. “In the current circumstances we have decided to suspend some visits, political ones,” said French president Emmanuel Macron on Thursday. Trump, who had initially suggested that rogue elements could have been responsible, said yesterday that the consequences will be “very severe” if Saudi Arabia is responsible for the murder. Treasury Secretary Steve Mnuchin has announced that he is withdrawing from attending the Future Investment Initiative summit in Saudi Arabia, though he plans to attend a terror anti-finance meeting in Riyadh later in October. Turkey, which has been steadily leaking information about the grisly fate of Khashoggi, is doing everything it can to feed the firestorm in an effort to pry Saudi Arabia and the United States apart.

The actions, or inaction, of the Trump administration are also beginning to come under scrutiny. CNN is reporting that Turkey knew within hours about what had transpired in the Saudi consulate. In particular, the role of  the crown prince is coming under scrutiny. This is raising questions about whether the administration knew as well, long before the murder became public knowledge. At the same time, eleven Democratic senators have sent Trump a letter demanding information about any financial ties that he may have to Saudi Arabia.

At the same time, the role of the crown prince is coming under close scrutiny. According to the Guardian's Jonathan Freedland, “The war on Yemen, of which he is credited as the architect, has been about projecting Saudi strength, as was last year’s arrest and imprisonment of hundreds of potential challengers to his authority, including members of his own family. The sheer brazenness of Khashoggi’s murder in a foreign country—with fifteen Saudi officials flying into Istanbul carrying equipment to dismember a body, later followed by a squad of cleaners bearing mops before the Turkish authorities could inspect the premises—suggests a ruler who wanted to send a message: I can kill my enemies with impunity.”

Trump himself is warning against a rupture in relations, pointing to arms sales to the kingdom. In addition, the prospect of rising oil prices weighs heavily on his decisions. Trump has shown little, if any, appetite for trying to finger the culprits; rather, he has sought to bolster the Saudi regime. Among House Republicans, some on the right are seeking to bolster Trump’s stance by alleging that Khashoggi is himself a questionable character. This stance has been propounded in a variety of outlets. London Spectator editor Freddy Gray, for example, animadverted, “Saudi trolls have been active in casting aspersions on Khashoggi, no doubt. But does that mean Khashoggi was nothing but a cuddly liberal? Clearly not. Sometimes, at newspapers or magazines, reporters are taken—or take themselves—off stories because they are too close to the story. They can’t see it objectively. At the Washington Post, when it comes to Jamal Khashoggi, the whole paper is too close to the story. It shows.”

But the Brookings Institution’s Tamara Cofman Wittes takes a very different view. She argues that such claims about Khashoggi are hopelessly hypertrophied. According to her, “All of this is not to say that the Brotherhood is merely benign, that its tenets are compatible with democracy, or anything else so simplistic. It is merely to say that the story of the kingdom and the Brotherhood is not a simple morality play, and that those claiming Khashoggi’s Brotherhood sympathies as some kind of black mark reveal nothing so much as their ignorance of the kingdom, the region, and its history.”

Still, the broader question is the geopolitical one. Will the Trump administration be forced to alter fundamentally the traditional ties with Saudi Arabia that have prevailed ever since Franklin Roosevelt met with Saudi King Ibn Saud in February 1945 aboard the U.S. cruiser Quincy? Or will this be a moment more akin to Tiananmen Square, when international indignation over China’s sanguinary actions reached a crescendo, only to subside as it became business as usual in following years?