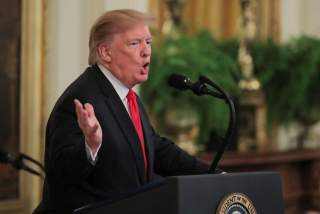 Will he do it? “It's something that I'm sure we'll be looking into and studying,” Kevin Hassett, the chairman of the Council of Economic Advisers said on Monday, making the prospect sound more dubious. The “it” in question is, of course, closing the U.S. border with Mexico.

President Donald Trump has been vowing to close America’s southern border should Mexico fail to halt the flow of asylum seekers moving north. The U.S. Chamber of Commerce is up in arms at the prospect, but administration officials such as Kellyanne Conway are saying that it “isn’t a bluff.” Commentator Ann Coulter, who has singed Trump for his failure to build the wall, approvingly and irreverently tweeted today: “As the world’s leading consumer of margaritas & guacamole, I nevertheless would fully support a shortage of avocados if it also meant a shortage of illegals.” The cause of conservative ire is the rapid recent surge in migrants, reaching 100,000 in March, the highest rate since 2008. Migrant encounters for Fiscal Year 2019 are predicted to reach one million, the highest since 2000.

Kevin McAleenan, Commissioner of U.S. Customs and Border Protection, told an assembled press conference on Wednesday last week that the country’s immigration system had reached “its breaking point.” “CBP is facing an unprecedented humanitarian and border security crisis all along our Southwest border,” McAleenan told reporters.

The primary example he used was El Paso, Texas, where the border processing center has reached 400 percent capacity. Pictures of migrant families housed under a bridge, surrounded by a chain-linked fence and wire, are provoking indignation on social media. Authorities announced this morning that they’ll be closing the holding pen. But this small “victory” due to domestic outrage will not alleviate the lack of physical structures to house the migrant wave, including 40,000 children in March alone. McAleenan concluded with his “fear that it's just a matter of time” before a preventable tragedy occurs.

The administration’s punitive response to the crisis was to cut off financial aid to the Guatemalan, Honduran, and Salvadoran governments who they believe have not done enough to stop the migrants from traveling north, and to threaten the closure of the U.S.-Mexico border.

“If Mexico doesn’t immediately stop ALL illegal immigration coming into the United States throug [sic] our Southern Border, I will be CLOSING…the Border, or large sections of the Border, next week. This would be so easy for Mexico to do, but they just take our money and ‘talk.’ Besides, we lose so much money with them, especially when you add in drug trafficking etc.), that the Border closing would be a good thing!” said President Donald Trump in a short sequence of tweets on Friday.

“Mexico must use its very strong immigration laws to stop the many thousands of people trying to get into the USA. Our detention areas are maxed out & we will take no more illegals. Next step is to close the Border! This will also help us with stopping the Drug flow from Mexico!” tweeted the president again on Saturday, with a retweet Monday morning for good effect.

Closing the border would the latest in a series of attempts by this administration to stem the human tide. On February 15, President Trump declared a “National Emergency Concerning the Southern Border of the United States,” where he ordered the redirection of billions of dollars in the Department of Defense’s budget towards the construction of a wall along porous parts of the Mexican border. Congress, having refused to appropriate the necessary funding, voted to terminate the emergency declaration, a vote that included a dozen Republican defections. When the resolution arrived at the Oval Office, President Trump issued the first veto of his presidency.

Closing the border would mean shutting down ports of entry and preventing the legal exchange of goods and the legal movement of people. For instance, shipments of vegetables would be stopped at the border, truck drivers blocked, and tourists turned away. According to McAleenan, 40 percent of the Border Patrol’s manpower is being used up at legal ports of entry transporting and caring for migrant families. At the same time, 90 percent of the migrants who crossed the border in March did so between the ports of entry. This disjuncture, supporters of the president’s plan argue, would be alleviated if more Border Patrol agents were moved away from ports of entry. This would be accomplished by closing them down.

“Closing the border with Mexico will interrupt U.S. trade and legal immigration at enormous cost to Americans and fail to address the current problem. Central Americans at the border are asking for asylum, which U.S. officials are required by law to hear regardless of whether the border is closed,” said Alex Nowrasteh, a senior immigration policy analyst at the Cato Institute. Mexico is America’s third largest trading partner, with over $600 billion in goods crossing the border last year. Interrupting this exchange, which on a daily basis includes thousands of cargo trucks going back and forth, would have mammoth repercussions for both the U.S. and global economy.

“Closing the border will hurt American businesses, workers, and legal immigrants without stopping the flow of asylum seekers,” summarized Nowrasteh to TNI.

“I'm not sure how effectively you can ‘close’ a border on an ongoing non-emergency basis,” said Jim Antle, editor of the American Conservative. “[A]nd even if you view the current migrant surge as an emergency, it is not something that lends itself to a quick solution. I think the president was able to have an immediate impact on illegal immigrant inflows by changing enforcement priorities and using tough rhetoric, but deeper changes in policy were needed to build on that momentum.” What’s more, as Hassett’s cautious remarks indicate, the administration could also study the problem of closing the border to death.

Having run for president in 2016 with immigration restrictionism as his defining and winning policy, once in office Donald Trump chose to focus on areas more agreeable to congressional Republicans such as tax policy and healthcare. Now, after putting immigration on the back burner for two years, the president finds himself at an impasse with a hostile Democratic majority in the House of Representatives. “House Democrats aren't going to give him anything he wants on immigration,” concluded Antle.

President Trump will be traveling to California to tour the border on Friday.