Will Trump's Presidency Overturn the Fragile Peace in Russia's Backyard? 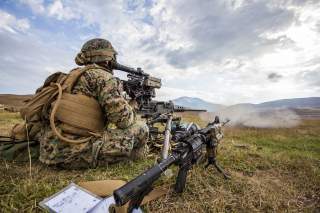 After the collapse of the USSR, the Transcaucasian countries became a focus for American political and economic elites. This region was attractive to the United States for several reasons. First, Washington understood that Russia would use the Caucasus as a geostrategic bridge to the Middle East. Many outstanding experts noted that the United States needed to expand relations with the countries of the region in order to prevent excessive strengthening of the Russian factor. In this regard, the administrations of both Bushes, Clinton and Obama considered the Caucasus an important element of the long-term Middle East policy. Second, U.S. oil corporations sought to gain access to the oil fields of the Caspian Sea. America, seeking to reduce its European allies’ energy dependence on Russian gas, lobbied for the construction of energy projects that bypassed Moscow. In addition, Washington was involved in the settlement of ethnopolitical conflicts, becoming a permanent member of the OSCE Minsk Group on the Nagorno-Karabakh conflict. Over the past twenty years, U.S. leaders have said that the South Caucasus is an important element in American foreign policy in the greater Middle East. Will America’s attitude change with the new president?

First of all, it should be noted that the United States considers each country of the region, namely Armenia, Georgia and Azerbaijan, not only in the context of the region-wide policy in Caucasus, but also in terms of bilateral relations. Thus, Georgia plays the role of an agent of America’s political interests in the region. The United States supported Georgia’s territorial integrity, and condemned Russia’s recognition of Abkhazia and South Ossetia. Every year, Congress increases its external allocations for Tbilisi’s humanitarian, economic and military needs. Moreover, next year, Georgia will receive up to $90 million, which is twice the total amount of equivalent assistance to Armenia, Azerbaijan and Turkey. Besides that, Tbilisi has made the greatest progress in the process of European integration. It is also the region’s most active country in terms of military-technical cooperation with the United States. In July of this year, U.S. secretary of state John Kerry and Georgian prime minister Giorgi Kvirikashvili signed a memorandum on deepening of partnerships in the field of defense and security between the two countries. It provides cooperation in border, maritime and airspace security.

Cooperation with NATO is the most troubling element. Over the years, Georgian authorities have declared their intention to become a member of the alliance. The United States, as NATO’s leading power, has also stated that it wishes to see Georgia as a full member. However, a number of reasons obstruct the process. First, NATO has no right to accept a state with unresolved conflicts. Thus, Tbilisi has to abandon South Ossetia and Abkhazia, which threatens to destabilize the political situation in the country. Such a scenario is unlikely to take place in the nearest future, so it minimizes Georgia’s possibility of becoming a NATO member. Second, full integration may lead to a confrontation with Russia, which does not want to see the alliance encroaching on the Caucasian frontier. Many NATO members understand the importance of cooperation with Tbilisi, but they also realize the limits of their capabilities in the case of a new Russian-Georgian war.

Meanwhile, joint military exercises have been held more frequently. Earlier this month, NATO-Georgia Exercise 2016 took place near Tbilisi. Moscow called it a threat to peace in the region. Moreover, as of 2016, Georgia ranks fourth overall and first among non–NATO member countries in terms of the number of troops participating in NATO’s “Resolute Support” mission in Afghanistan. We should not forget that Georgia is an ideological mirror of American policy for other countries in the region. Many experts point out that the United States’ support led Georgian authorities to launch an effective fight against corruption and hold a series of major reforms that changed people’s lives for the better. Thus, U.S. policy toward Georgia is unlikely to be radically revised during Donald Trump’s presidency. Official Tbilisi will continue to deepen relations with NATO, maneuvering between Washington, Brussels and Moscow. In turn, pro-Georgian Republicans in Congress are unlikely to allow the White House to cut allocations for Tbilisi and cancel a number of strategic agreements that determine the general nature of U.S.-Georgian relations.

Unlike Georgia, relations with Azerbaijan have sharply deteriorated over the past eight years. During the presidency of George W. Bush, Azerbaijan was regarded not only as an energy donor, but also as a logistic bridgehead for operations in Afghanistan and carrying out intelligence activities against Iran. Practical necessities forced the Bush administration to overlook systematic violations of human rights in Azerbaijan, as well as mass arrests of journalists and members of the opposition. The neoliberal Obama team saw dialogue with the government of President Ilham Aliyev differently. In the very first year, America cut its financial assistance program to Azerbaijan significantly, compared to an increase in allocation for other countries in the region. The White House, Congress and leading human-rights organizations started criticizing President Aliyev for the arrests of journalists and political activists who opposed the regime’s policies.

Numerous allegations resulted in the “Azerbaijan Democracy Act,” a bill introduced in 2015. The draft law would impose a ban on entry by the entire leadership of the country, including all members of their families, starting with Aliyev and including the prime Minister, members of the presidential administration, security officers and judges. Now the bill is under consideration by the House Committee on Foreign Affairs and, if approved, it will be put forward for a vote.

After the Maidan protests in Ukraine, President Aliyev, afraid of political instability, decided to become closer with Russia. Overall, while there is a deep crisis in U.S.-Azerbaijani relations, those between Baku and Moscow are developing in all directions. However, Azerbaijan hopes that with the new U.S. president, relations with the United States will return to their past heights. Many Azerbaijani experts believe that the new administration will build a dialogue with Azerbaijan on the basis of pragmatic interests (e.g., oil and energy logistics), without interfering in internal political processes. If we project Trump’s foreign-policy rhetoric on Azerbaijan, it can be assumed that over the next four years the United States will be less interested in human-rights issues in that country.

Compared with Georgia and Azerbaijan, Armenia does not represent any geopolitical, economic and energy interests for the United States. The basis for bilateral relations between Washington and Yerevan is a particular perception of Armenia and the Armenian people. The special relationship between the American and Armenian peoples are rooted in deep history. President Woodrow Wilson was the arbiter of the Armenian-Turkish territorial dispute, and Congress removed immigration barriers for Armenians escaping the genocide of 1915–23. In addition, the Armenian Apostolic Christian tradition has much in common with American Protestantism. Some in America cite the Armenians as the first Christian nation, which for centuries has defending its faith in clashes with the surrounding Islamic world. Over time, representatives of the Armenian community have deeply integrated into the sociopolitical life of the United States, forming influential lobbying institutions at the local and federal levels.

Armenian lobbying has played a significant role in shaping U.S. foreign policy towards Armenia. Thus, Yerevan has become the second recipient of U.S. assistance per capita, after Israel. In the Nagorno-Karabakh conflict, Washington’s political sympathies are also on the Armenian side. This attitude resulted in the smooth adoption of Section 907 of the Freedom Support Act, which prohibits military assistance to Azerbaijan due to the illegal blockade of the Armenian border. Moreover, since 1994, Congress has allocated financial assistance to the legally unrecognized Nagorno-Karabakh Republic.

Various priorities and circumstances prevented the United States and Armenia from deepening their bilateral dialogue. Washington was interested in strengthening ties with Turkey—a NATO ally—and in Caspian oil. In turn, Yerevan was forced to move closer to Russia and Iran because of the Turkish and Azerbaijani blockades. Despite this, not only do the United States and Armenia retain the positive dynamic in their relationship, but also find new areas for cooperation.

Armenia’s membership in the Eurasian Economic Union did not prevent the United States and Armenia from signing trade and investment agreements and creating the U.S.-Armenian Council for Trade and Investment. Besides that, Armenia’s membership in the Collective Security Treaty Organization (CSTO) does not prevent Yerevan from developing cooperation with NATO. Armenian soldiers and officers participate in peacekeeping operations in Iraq, Kosovo and Afghanistan. Armenian soldiers, together with NATO members and partners, regularly take part in winter and summer mountain training courses in the framework of NATO’s Partnership for Peace program. Cooperation with NATO allows Armenia not only to improve its armed forces, but also to devalue efforts by Turkey and Azerbaijan to use the alliance’s instruments against Armenia.

Trump’s presidency may affect U.S.-Armenian relations in various ways. Today, the Armenian side is strongly dependent on the U.S. position in dealing with the Karabakh issue. Over the last twenty years, the United States has maintained balance between pro-Armenian and pro-Azerbaijani sides in the framework of the Minsk Group. The United States became more active when Russia promoted pro-Armenian initiatives, and vice versa. At the same time, France, as the third permanent member of the Minsk Group, supported the United States’ pro-Armenian position and was neutral in case of Russia’s pro-Armenian views. Now, Moscow has adopted a more pro-Azerbaijani position, and if it manages to persuade Washington to support its plan for resolving the conflict, Yerevan will be in a tough situation. Such a scenario is quite possible, if the new administration makes a bet on Azerbaijan, as it was during the presidency of George W. Bush. On this basis, we should expect a serious fight between pro-Armenian and pro-Azerbaijani oil lobbyists in Washington. The latter scenario is also unfavorable for Armenia, as it implies passivity and indifference of the United States to Armenia and Karabakh.

If Trump’s administration does not pay proper attention to this issue, Russia will finally monopolize the negotiation process.

Areg Galstyan, PhD, is a regular contributor to Russia in Global Affairs and Forbes and head of the American Studies Research Centre (Russia).

Image: U.S. Marines demonstrate their firepower on the range with M240 and .50 caliber machine guns during Exercise Agile Spirit in Georgia. DVIDSHUB/Public domain