Will Turkey’s Détente with Egypt and the Gulf Extend to the Horn of Africa? 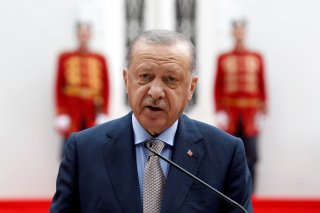 Turkish president Recep Tayyip Erdogan announced a $30 million donation to Somalia last month. This gesture raised eyebrows among Turkish citizens, who protested that their cash-strapped government should have used the money on firefighting planes to battle raging blazes at home. But Erdogan’s interest in Somalia is not a passing fancy or humanitarian gesture. Over the last decade, Ankara’s aid to Mogadishu totaled more than a billion dollars as Erdogan and his Qatari allies competed against their Egyptian and Gulf rivals for influence in the Horn of Africa. Yet as Turkey and Qatar now pursue détente with Egypt, Saudi Arabia, and the United Arab Emirates (UAE), the Horn may get a respite from their rivalry.

The Gulf states’ involvement in the Horn has grown sharply in the last decade, becoming yet another flashpoint in a regional struggle over ideology and strategic terrain. The Horn is adjacent to the Red Sea, which lies between two key maritime chokepoints upon which global trade and traffic depend: the Bab el-Mandeb Strait in the south and the Suez Canal in the north. Somalia also opens out to the broader Indian Ocean basin, itself a key route for maritime security and trade. As the Indian Ocean base race heats up, the Gulf states have been keen to secure their own interests.

Ideologically, the Horn constitutes one more arena like Libya and Tunisia in which Erdogan and his Qatari partners seek to promote the influence of the Muslim Brotherhood. On the other hand, Saudi Arabia and the UAE have worked actively in Eritrea, Ethiopia, Somaliland, and Sudan to counter the Turkish-Qatari axis. Their rivalry set off a crisis in Somalia earlier this year, as Mohamed Abdullahi, the country’s Doha-backed president, nearly triggered an armed conflict by seeking to delay elections. This follows last September’s warning by Somalian opposition leaders that Abdullahi might use Turkish weapons to “hijack” the coming elections.

At the height of the Arab Spring, Erdogan invested in expanding the regional footprint of an ascendant Muslim Brotherhood. In 2012, the International Crisis Group warned Turkey about its destabilizing role in Somalia, recommending Ankara to “tread prudently, eschew unilateralism and learn lessons to avoid another failed international intervention.” Following the Muslim Brotherhood’s reversal of fortune as the Arab Spring turned into a bitter winter, the Turkish president prioritized pushing back against his Gulf rivals and Egypt on all fronts, directly and through proxies. Domestic politics reinforced this impulse. Erdogan’s eroding support base and his ensuing dependence on ultranationalist and Eurasianist factions at home led him to embrace the irredentist naval concept of Turkey’s Blue Homeland, and with it, enhanced overseas ambitions that extend to the Red Sea and the Indian Ocean.

In 2016, during his visit to Somalia, Erdogan inaugurated Turkey’s largest embassy ever built, a sign of the Horn’s significance for his broader aspirations. Although the 2019 ouster of the Sudanese Islamist dictator Omar al-Bashir, a close ally of Erdogan, derailed Ankara’s plans to redevelop the port on Sudan’s Suakin island for civilian and military use (along with Qatar, which signed a separate deal with Sudan to develop Suakin), Turkey still maintains its biggest overseas military base in Mogadishu.

The controversies surrounding the Turkish role in Mogadishu also point to the ways in which the Turkish president’s ideological and personal interests can overlap in the Horn. The Turkish ports operator Albayrak, a conglomerate with close links to Erdogan, won a fourteen-year concession to refurbish and manage Mogadishu’s port last year, providing Ankara an important access point on the Indian Ocean. A Turkish columnist alleged last month that Somalia was going to use Erdogan’s $30 million donation to expand the port’s capacity.

While clashing interests and ideologies still shape dynamics in the Horn, Joe Biden’s election as president brought about a recalibration of Egyptian, Gulf, and Turkish policies toward the region, triggering various attempts to mend ties among opposing blocs. This week’s reports that Qatari and Turkish officials will attend an energy conference in Dubai is the latest sign of the improving relations between the UAE and two of its foremost rivals. For all of the contenders, Biden’s pledge to pursue a human rights-centered foreign policy led to concerns that they would become targets of Washington’s ire. Biden’s promise to restore the Iran nuclear deal created additional uncertainty, in response to which the two axes swept some of their outstanding differences under the rug for the time being.

Jeffrey Feltman, Biden’s special envoy for the Horn of Africa, concluded a visit to the Gulf in June, making stops in Saudi Arabia, the United Arab Emirates, and Qatar. The appointment of a special envoy signifies the heightened priority Washington now gives to this region. It also reflects the risks involved if the competition in the Horn heats up once again between pro- and anti-Muslim Brotherhood camps.

Although the extent to which the climate of détente will affect the Horn is not certain, the relative calm offers a unique opportunity for Washington to claim leadership and prevent the kind of violent rivalry that proved disastrous in Syria and Libya. Special Envoy Feltman should continue his engagement with the regional actors in the Horn and encourage the flow of resources into building inclusive institutions instead of ramping up proxies and factionalism.

Aykan Erdemir is a former member of the Turkish parliament and the senior director of the Turkey Program at the Foundation for Defense of Democracies. Follow him at @aykan_erdemir

Varsha Koduvayur is an Analyst at Valens Global, a security, research, and analysis firm. Follow her at @varshakoduvayu.