Will Turkey Destroy Its Own Economy? 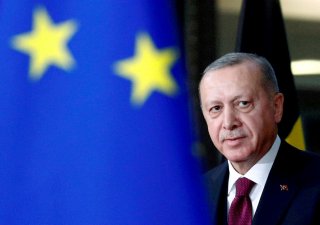 It is said that those whom the gods wish to destroy they first make mad. This certainly seems to be true of Turkish president Recep Erdogan, at least as far as his economic thinking is concerned.

He is now choosing the worst of times to subject his country again to his eccentric view about interest rate policy. That view has economic failure written all over it and is bound to cost Erdogan dearly at the polls.

In a surprise move over the weekend, Erdogan chose to fire Naci Argal, his economically orthodox and highly respected central bank governor. Never mind that Argal, who was appointed to his job last November in the midst of a currency crisis, succeeded in stabilizing the Turkish lira and taming inflation. He did so by aggressively raising interest rates from 10 percent to 19 percent and by rebuilding market confidence in the re-establishment of Turkish central bank independence.

As a result of his sound stewardship, over the past few months, the Turkish currency appreciated by 18 percent making it amongst the world’s best-performing currencies. At the same time, inflation showed signs of coming back under control.

Unimpressed by Argal’s success in defusing a currency crisis and taming inflation, Erdogan has chosen to replace him with the relatively unknown Sahap Kavcioglu. The apparent reason for his so doing is that Kavcioglu subscribes to Erdogan’s highly eccentric view that higher interest rates are the cause rather than the cure for inflation. With a political lightweight like Kavcioglu at the central bank’s helm, Erdogan believes that he will be able to get the central bank to do his bidding and to cut interest rates ahead of the next Turkish election.

For an emerging market economy, it is generally not a good idea to engage in highly unorthodox economic policy even when global liquidity is plentiful. This makes the timing of Erdogan’s move all the more surprising. He is choosing to move at precisely the time that global liquidity conditions for the emerging market economies are tightening and are likely to continue tightening.

Indeed, as a result of the largest U.S. peacetime budget stimulus on record and growing inflation concerns, ten-year U.S. Treasury bond yields are now rising at a more rapid pace than they did during the 2013 Bernanke Taper Tantrum. For similar reasons, the dollar is beginning to strengthen. Those conditions are bound to put a sudden stop in the flow of capital to the emerging market economies in general and to Turkey in particular.

It is also not a good idea to wave a red flag at the markets by pursuing unorthodox policies at a time that one’s country is as vulnerable to speculative attack as is Turkey. Not only has the central bank depleted its international reserves in the past unsuccessful defense of the currency. Its corporations are saddled with a mountain of U.S. dollar-denominated debt and its all-important tourist industry is on its knees as a result of the ongoing coronavirus pandemic.

Needless to add, Turkey’s economic vulnerabilities have not been lost on the markets. In a matter of days, the Turkish lira has lost more than 10 percent in its value as investors have rushed to the door. Meanwhile, the country’s stock and bond markets have been pummeled as investors now fret about the direction of economic policy under an erratic and increasingly powerful president.

Having defiantly rolled the economic policy dice and totally undermined the central bank’s independence, it is doubtful that Erdogan will make a humiliating policy U-turn without a further intensification of the country’s currency crisis. The only good thing that might come out of the country’s economic troubles is that it might serve as a warning to other emerging market countries not to play with economic policy fire especially at a time of a less forgiving international financial market environment.