Will Turkey Drag America Into Its Kurdish War? 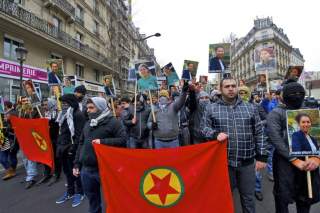 Even the best metaphor fails to describe the insanity of Turkey’s attack on the militant Kurdish group PKK (Kurdistan Workers’ Party) along with ISIS (Islamic State in Iraq and al-Sham). From 1984 until 2013, the Turkish state fought the PKK in an inconclusive conflict that claimed 40,000 lives. Although the new cycle of violence is a replay of the same dumb conflict, Turkey, much like in Albert Einstein’s definition, expects different results.

Fighting the PKK at the same time as ISIS is not only crazy, it is also detrimental to the interests of Turkey and the United States.

Turkey’s latest horror show started on July 20th when an ISIS suicide bomber killed 32 youth activists and injured another 104 in the Turkish town of Suruç. The young folks were headed to the Syrian Kurdish town of Kobane for aid work. The PKK accused Turkish President Recep Tayyip Erdoğan, Prime Minister Ahmet Davutoğlu, and their Justice and Development Party (AKP) of harboring sympathies for ISIS, and began attacking Turkish military and police forces.

Meanwhile, ISIS picked up the pace. On July 23, fighters of the self-anointed caliphate killed a Turkish soldier on the Syrian border. Ankara launched airstrikes against both ISIS and PKK and opened up its airbases to the United States in support of anti-ISIS operations.

At one level, Turkey’s simultaneous attack against the two groups is not surprising. Erdoğan and Davutoğlu have stated repeatedly that the PKK and the Assad regime—not ISIS or other extremist groups—are the greatest danger to their country. At times, Turkish officials established moral equivalence between PKK and ISIS. Until last month, Turkey refused to participate in U.S.-led operations against ISIS because they did not target Assad’s forces.

But to lump the PKK (as well as its Syrian-affiliate, the Democratic Union Party (PYD) and PYD’s armed wing, the People’s Protection Units [YPG]) together with the religious extremists of ISIS will be counterproductive for the Turks and their American ally.

That’s not because ISIS poses as great a risk to Ankara as the PKK. Quite the opposite: with some time, effort, and yes, bloodshed, Turkey could stabilize the Syrian border and track down and neutralize ISIS cells inside its borders. After all, Turkey is the second largest military power in NATO.

The most troubling element in Turkey’s war against the PKK is that it violates the basic tenets of strategic thinking. Forget about Sun Tzu and the importance of going to war only after creating the conditions for victory. Never mind Clausewitz and war being a rational exercise to organize chance and violence for tangible and attainable political objectives. And pay no heed to Bismarck and his warnings about fighting two-front wars.

Ankara’s (re-)militarization of its PKK problem ignores a simple fact: The PKK is an outgrowth of the Kurdish question, which is fundamentally a political, social, and legal matter. For much of the 20th century, Turkish Kurds were denied their cultural and social rights. The PKK sprung out of Turkey’s repressive military regime of 1980-83.

For much of the period from 1984 through the mid-2000s, the Turkish state followed a logic similar to U.S. Secretary of Defense Robert McNamara’s “metrics” (read: body counts) during the Vietnam War. With no regard to the qualitative aspects of warfare, McNamara had postulated that once North Vietnamese and Vietcong casualties reached a point where they could not be replenished, the United States and South Vietnam would prevail.

Likewise, Turkish military and civilian leaders focused on the number of PKK militants they killed (a majority of the 40,000 dead) at the height of the conflict in the 1990s, but they could never explain why the conflict would never end.

The current flare-up looks eerily similar to the 1990s. Today, as in the past, Turkish forces hit PKK militants who attack Turkish personnel only to be pounded in return. This feedback loop renders a political solution to the Kurdish question—the only method in which this conflict could be resolved—less likely.

Even from a purely military standpoint, Turkish airstrikes against ISIS and PKK could prove ineffective. In an interview with this author, Dr. Henri Barkey argued that Turkish airstrikes “will not be that effective because it’s not possible to do anything serious without a ground component.”

“The Turkish Air Force lacks the sophistication and capabilities of the U.S. Air Force” warns Barkey, an expert on Kurdish affairs and director of the Middle East Program at the Woodrow Wilson Center in Washington. “Even the U.S., despite its air assets, relies on Kurdish ground forces to deal with ISIS.”

But could Turkey afford to put boots on the ground in Iraq and Syria?

Any increase in Turkish troop levels could make the most intense period of the fighting in the 1990s look like a pleasant dream. There is a new generation of Turkish and Kurdish kids who are too young to remember how violence only exacerbated everything and they could (literally) add fuel to fire.

That dynamic is already in play. Since 2013, a group calling itself the Patriotic Revolutionary Youth Movement (YDG-H), a PKK-affiliated Kurdish youth organization, has clashed with Turkish security forces. In an interview with this author, Aliza Marcus, an expert on the PKK and author of Blood and Belief: The PKK and the Kurdish Fight for Independence, pointed out that “some of the recent attacks on Turkish policeman may be YDG-H’s work.” Turkish military action, Marcus argued, could “play to the PKK’s strength. “Support for PKK among Kurdish youth is so strong that Turkish military action just reinforces it.”

In other words, heavy-handed methods would only help the PKK’s recruiting efforts at home in Turkey and intensify the conflict.

The real tragedy is that Turkey could have avoided this dilemma. From 2009 until early 2015, the AKP government undertook a “Kurdish opening” and held secret peace talks with the PKK. Since early 2013, a ceasefire was in place. While Kurds’ social and cultural problems had been addressed by that point, political rights and transitional justice—how to deal with Kurdish regional autonomy and the fate of PKK militants (especially the group’s imprisoned leader, Abdullah Öcalan)—remained unresolved.

Worried about losing votes to more nationalistic parties if it took unpopular decisions, the AKP stalled. Erdoğan, who won the presidency in August 2014 with 52 percent of the popular vote, caused his party to lose 11 points in the parliamentary election in June of this year. Ironically, AKP bled votes to the pro-Kurdish Peoples’ Democratic Party (HDP) for failing to resolve the Kurdish question and to the ultranationalist Nationalist Action Party (MHP) for its past courage in addressing Kurdish rights.

Resolving the Kurdish question in a timely and honorable fashion a few years ago would have obfuscated the need to bomb the PKK today. In fact, PKK and YPG militants in Syria and Iraq could have allied with Turkey against ISIS and Assad. And President Erdoğan would have been everybody’s hero at home and abroad.

Instead, Erdoğan and Davutoğlu turned their country into a “jihadist highway to Syria.” A big part of the problem is that Erdoğan is a bad strategist and an even worse statesman. The Turkish president is cynically obstructing his prime minister from forming a coalition government, hoping to use the conflict with the PKK to call for snap elections and recoup electoral losses.

Dragging the United States along

Turkey is not only harming itself: its actions also undermine U.S. interests in the Syrian civil war and the Middle East.

The Obama administration has given up on its Arab Spring dreams of cultivating Turkey as a “stabilizing” factor in the region. But the escalation of the Turkish-Kurdish conflict could turn the NATO ally from an asset into a serious liability for the United States. The PKK has a ready source of disaffected Kurdish youth in many Turkish cities and they could engage in large-scale attacks throughout the country.

As recent events have shown, U.S. diplomatic and military posts in Turkey may not be spared. The United States recognizes the PKK as a “terrorist organization” and has supported recent Turkish airstrikes against PKK positions in northern Iraq. While the group’s central committee in northern Iraq has not shown any interest in attacking U.S. targets in Turkey, lone-wolf incidents by Kurdish militants are possible.

Turkey’s anti-PKK operations could undermine U.S. efforts in Syria, too. The image of “America selling out the Kurds” is bad enough. But things could get worse if Ankara attacks YPG forces, which have been fighting ISIS with U.S. air support since fall 2014.

For Aliza Marcus, this is a serious problem. “I think Washington is very short-sighted and doesn’t realize that the fight against ISIS may be undermined if the conflict between the PKK and Ankara continues. Washington should consider mediating between the PKK and Ankara to get the ceasefire back on track and secure YPG’s role in the fight against ISIS.”

“Getting Turkey into the fight against ISIS is very important but a lot of the gains would be lost in the process if the YPG is hurt or lost.” Marcus adds.

Henri Barkey agrees. “The United States would not mind a Turkish operation into [northern Iraq]. But if [Turkey] also hits [YPG], things would go off the rails.”

Finally, there is a decent chance that an independent Kurdish state could emerge in Iraq and Syria in the next few years. For years, Ankara and Washington have resisted the idea of an independent Kurdistan. But if Kurdish independence does come to pass, it would be not be in Turkish or U.S. interests to midwife it by killing more Kurds.

Barın Kayaoğlu, an independent political analyst and consultant in Washington, D.C., frequently writes and comments for U.S. and international news outlets. He recently finished his doctorate in history at the University of Virginia. You can follow him on www.barinkayaoglu.com, Twitter (@barinkayaoglu), and Facebook (Barın Kayaoğlu).