Will Ukraine Begin a New Dialogue With Moscow? 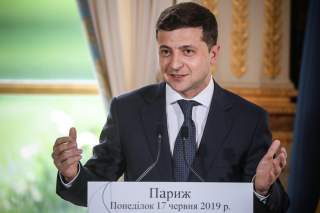 Is there a possibility for a fresh start in Ukraine that would push for a fight against corruption, reforms, and a dialogue with Moscow—all of which polls indicate are backed by the vast majority of voters who supported the candidacy of Volodymyr Zelensky for the presidency? A luncheon discussion at the Center for the National Interest on Thursday surveyed whether Zelensky will indeed be able to translate his electoral success into a breakthrough on negotiations with Russia. The panelists were Samuel Charap, a senior political scientist at the RAND Corporation who has served on the Policy Planning staff during the Obama administration, Keith Darden, an associate professor at American University’s School of International Service, and Jacob Heilbrunn, the editor of the National Interest. The event was moderated by George Beebe, vice president and director of studies at the Center for the National Interest, and a former chief Russia analysis at the CIA as well as a White House aide during the George W. Bush administration.

While a settlement currently remains a distant aspiration, the panelists had mostly good news to share about Europe’s most fractious conflict. It is “remarkable,” said Keith Darden, that, after five years of war, Ukraine is “not dealing with a Balkans scenario, where war has polarized the Ukrainian population and has made reconciliation impossible.” He continued:

“In many ways, this election put the lie to the caricature that was circulating about Ukraine both here and in European capitals, which was that a country that was united in its resistance to Russia—engaging in consensual nation-building, reviving its national language, creating a unified Orthodox church that was autocephalous and separated from Moscow, and working as hard as it possibly could to separate itself from the Russian Federation and unwilling to yield . . . on its territorial integrity or on any matters of potential compromise with the Russian aggressors.”

Instead, Darden said, what we are seeing is that “the Ukrainian people have positive attitudes toward Russia,” and retain “brotherly” sentiments towards the Russian people. To support this assertion, as well as to lend credibility to Zelensky’s push for reconciliation with Russia, Charap referred to public polling in Ukraine that suggested a softening of views among the Ukrainian people. According to Charap, a May poll found that “75 percent of Ukrainians are in favor of direct negotiations with Russia for restoring peace to the Donbass” and “55 percent are in direct negotiations with separatist leaders for the same purpose.” Further polling reported that “65 percent of respondents said that Ukraine should make compromises in order to restore peace and return lost territories” to Ukraine and that “about 50 percent of Ukrainians support giving autonomy to the separatist regions in order to achieve a settlement,” which Charap noted is “one of the conditions of the Minsk agreements.”

Yet while Zelensky was elected on a platform of compromise with Russia and public support seems to be firmly on his side, other problems restricting his political latitude remain. Referring to an incident where the Ukrainian foreign minister rejected a Russian proposal to negotiate over Ukrainian sailors detained in the Kerch Strait crisis without informing the president, Charap said that Zelensky “doesn’t really have full control over his own government.” This sentiment extends beyond the Ukrainian Ministry of Foreign Affairs to the Ukrainian parliament, known as the Verkhovna Rada, as well. Since this Rada was elected under the previous president, Petro Poroshenko, in the immediate aftermath of the Euromaidan protests in 2014, Darden contends that it is now “completely unrepresentative of the population and popular attitudes at this point and are almost universally going to be thrown out of their seats” during the next election on July 21.

Thus far, these internal dynamics have made Zelensky less effective than he could otherwise be, creating the perception in Moscow that the Ukrainian leader is not in a position to negotiate fundamental changes to the status quo, even if he could be later in the summer. Furthermore, Charap observed, Russia is aware that on most key foreign-policy issues, Zelensky’s positions are “largely the same” as those of his more anti-Russia predecessor. Under Zelensky, Ukraine has neither changed its stance on favoring European Union and NATO membership, nor its more general concerns with Russian foreign policy or its opposition to the German-Russian Nord Stream 2 pipeline.

Turning to European perceptions and the Ukrainian relationship with Europe, Heilbrunn said that Zelensky should not feel confident with recent European moves to begin a process of Russian reintegration into the continent. For Heilbrunn, the drivers of this reintegration are twofold. First, as epitomized by Moscow’s return to the Council of Europe, some Europeans—especially in France, Germany, and Italy—want to improve relations with Russia to restart bilateral trade. Offering the example of Germany, Heilbrunn reported that “87 percent of the members of the Russian-German chamber of commerce indicated that they want Merkel to take a more active role in promoting economic activity with Moscow.”

The second driver is the United States and the Trump administration. According to Heilbrunn, Donald Trump’s targeted rhetoric on the United States’ European allies, such as calling Germany a “captive of Russia” over the Nord Stream 2 deal, is pushing some European countries like Germany and France to “crabwalk” towards more independence from America. Much like how Germany and France are permitting Russia back into the European political architecture, Beebe said that the United States is following a similar path: “President Trump had canceled a planned meeting with President [Vladimir] Putin several months ago specifically over Russia’s detention of the Ukrainian seaman, saying that he would not meet with Putin until such time as those seaman had been returned, and yet this meeting is going on nonetheless, although Russia continues to detain them.”

Noting that Russia has an outsized and decisive influence over the Ukrainian separatists operating in the Donbass, Christopher Anderson, a U.S. State Department employee who worked with the U.S. Special Representative for Ukraine Kurt Volker, asked “What more can be done to get peace [between Russia and Ukraine] . . . [given] Russia’s goal to have an autonomous republic of Donetsk and Luhansk with a veto over Ukrainian foreign policy?”

In terms of unilateral Ukrainians actions that could move the process forward, Charap said that taking the current special status for Donbass seeing “actually decentralized power throughout all regions of Ukraine.” Noting that Ukrainians had been talking about the need for decentralized power in all non-foreign-policy-related issues since the 1990s, he said that a more decentralized system for Ukraine would better fit with the tenets of the proposed settlement for the Donbass. Otherwise, Charap fears that a “highly asymmetric, almost confederal structure, whereby two regions of the country have these totally disproportionate rights compared to the rest of the country” would not be viable.

Responding to Anderson, Dimitri Simes, president of the Center for the National Interest, who had talked last week to officials in Moscow, observed:

“The first thing that I can believe the United States can do, is to explore real Russian flexibility or the lack of it, is for you, together with Kurt Volker, to go to Moscow. The Russians have a grudging respect for Ambassador Volker … and I think that they would consider this quite significant, if he came to Moscow and he explored to what extent the Russians are prepared to talk seriously. I think that today the Russian position is very hardline ... because they don’t believe that an agreement is plausible, and they clearly thought it was not plausible under Poroshenko. Now I think there may be an opening. I do not know how real is this opening, whether it is sufficient in terms of cutting any kind of a deal, but why not talk to them?”

If Zelensky really is in favor of reconciliation with Russia, then he should welcome a move by Washington to explore such a diplomatic avenue.