Will Ukraine Save the UN From Irrelevance? 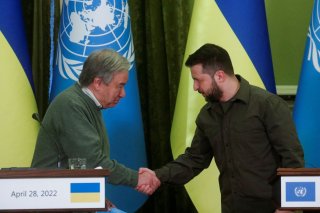 Russia’s war in Ukraine appears to be throwing the United Nations a lifeline. Ukrainian president Volodymyr Zelenskyy told the U.N. Security Council to expel Russia or dissolve itself. Blunt. No doubt, he stirred up the mud. The Ukrainian president might be right but also misguided. The proper question to ask is how could the UN and international law be effective with a “war criminal” on the Security Council armed with veto power on every resolution while probably committing “genocide,” and what can be done about it? A recently adopted new UN resolution requires the five permanent members to justify their use of the veto, which is a hopeful sign of the outdated system’s fast-track transformation.

However, turning a blind eye to further reforms degrades the UN Charter to a piece of paper. Further, it paves the path for the new Sino-Russian world order “to promote genuine democracy,” as announced by Xi Jinping and Vladimir Putin on the opening day of the 2022 Beijing Olympic Games.

Economic warfare doesn’t require the long-overdue reform of international legal mechanisms. Security and justice are the cornerstones of peace. International law should fight human rights atrocities effectively and prevent the legal abuses of the China-Russia axis. Otherwise, a new world order could legally emerge where the Chinese path of mass surveillance, organ harvesting, cultural and religious persecution, arbitrary detention is mixed with the Russian-type of intelligence, acts of genocide, full-scale military invasion, attack on civilians, mass graves become the new normal. Leaders of the free world should not allow it.

The UN itself has largely contributed to the erosion of international norms protecting against mass atrocities, war crimes, and crimes against humanity. It was a bizarre irony of the entire concept of international institutions that Russia was serving as the president of the UN Security Council at the time of its invasion of Ukraine. By giving Moscow this platform, the Kremlin’s narrative was intensified for weeks. Another uncanny twist is that Raphael Lemkin, a graduate of the University of Lviv Law School in Ukraine, coined the term ‘genocide in 1944, and the U.N. delineated it as a crime in 1948.

Russia’s violation of the UN Charter made the unprecedented arsenal of unilateral and coordinated sanctions possible, and Putin used the UN Genocide Convention to justify his attack on Ukraine. It’s a clear paradox.

Similarly, China's position in the UN shields the truth about the so-called “Uyghur genocide,” and it took nearly two years two arrange an official visit by Michelle Bachelet, the UN High Commissioner for Human Rights. The “Uyghur Genocide” was tried only before an independent people’s tribunal, the “ The Uyghur Tribunal.” Its verdict is non-binding; the UN’s spokesperson merely found the evidence “disturbing.” Sadly, not much happened.

Ukraine’s invasion proved again that the UN is dysfunctional in many ways. The “West” stands united to protect those values that the mechanisms of international law have been unable to do so for decades. The massacre in Srebrenica, genocide in Rwanda, and countless ongoing conflicts weren’t enough to trigger imminent reforms.

One of the problems plaguing international reactions is that Russia—along with China, the United States, the United Kingdom, and France—possesses a veto on the UN Security Council. It has protected the status quo of the “big five,” yet France and the UK haven’t used their power since 1989. Not even in conjunction with another veto-power nation. Russia is not that generous; it vetoed the draft resolution condemning its own invasion of Ukraine. Surprise? China abstained, backing each other over standoffs on Ukraine and Taiwan with a guarantee to cooperate more against the West. The UN was paralyzed. Again.

It took the General Assembly more than sixty years after the Uniting for Peace Resolution to step in where the UN Security Council was unable to act and condemn the invasion regardless of the Russian veto. The lately often cited radical option to amend the Charter to terminate Russian membership runs into “veto-issues,” too. The same applies to China if and when the UN decides to proceed in the “Uyghur Genocide” case. Beijing can veto anything. The major snag is evident. No permanent member would vote to expel itself against its national interest and foreign policy. The newly adopted “veto-justification” might be able to balance the system. Make no mistake, the mandatory scrutiny and discussion is a possible check on behavior. So far, the practical and legal consequences are unclear.

The UN has been in danger of becoming irrelevant. Russia’s invasion brought chaos to Ukraine. The immigration hard-liners, Hungary and Poland, opened their borders for refugees before even the European Union initiated its new tool Temporary Protection Directive and began providing €500 million in arms and other aid. Finland and Sweden are now about to join NATO. All standalone acts to face reality. Yet, the UN remains the last to change.

For decades, the United States remained silent and chose general support for the reforms and expansion without any specific proposal. The new resolution was co-sponsored by eighty-three member states, including the United States, to soften the legal gridlock. However, there is more to achieve. Russia’s invasion should merit a stronger U.S. response; otherwise, it would set a precedent for Russia, China, or others. There is a dire need for focused and committed international law that constrains arbitrary state actions and promotes international peace, security, values, and respect for sovereignty to address current issues. Otherwise, international law and order shall remain a dog and pony show without a pony.

Mónika Palotai is a Visiting Research Fellow at the Hudson Institute.