Will War with Iran Be the Result of a Poorly Planned Trump Doctrine? 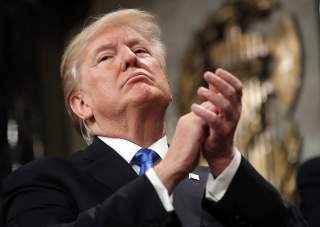 At last, a “Trump doctrine” is emerging. The new presidential doctrine will be mostly clearly seen in the United States’ growing confrontation with Iran.

Most transformational presidents have had some kind of eponymous doctrine. The Monroe doctrine signaled to European empires that America would no longer abide their continued attempts to subjugate and colonize the New World. The Nixon doctrine amounted to what the president called an “honorable” retreat from Vietnam and strategic diplomacy with communist-led China. The Reagan Doctrine was designed to “rollback” the Soviet Union’s domination and free its satellites in Europe and Asia. The Bush Doctrine aimed to stabilize the Middle East by promoting the emergence of a democracy-minded middle class—with the help of U.S. tanks and planes if necessary. The Obama Doctrine urged modesty in public pronouncements (“leading from behind”) and insisted on preventing war by working through the UN and other international institutions to secure negotiated solutions, especially with Iran.

So far, Trump doesn’t appear to have a coherent strategy, let alone a formal doctrine. And the word “appear” is doing a lot of work in the previous sentence. To the press and the policy analysts, the diplomats and the officers, Trump’s tweets and public remarks seemed random and uncontrolled, even reckless.

Diplomacy is usually an exchange of words and a small change of language can be a seismic shift in world affairs. In the pre-Trump era, words mattered. Words by presidents set policy and shifted ships and men.

If you doubt the power of presidential words, consider what would happen if a president referred to Taiwan as an “independent nation” or Israeli settlements as “suburbs.” Each are defensibly accurate and alternative ways of describing reality. Taiwan is governed by no other nation, holds its own elections, maintains its own armed forces and manages its considerable economy. And many Israeli settlements resemble suburbs, right down to their cul-de-sacs and block parties. Still, a president who used these alternative nouns, would set off a firestorm of protest at home and abroad.

President Trump uses words differently, especially in his tweets. Mocking the North Korean dictator as “Rocket Man” seems like a dangerously large escalation in language, like suddenly turning the volume of the background music from two to ten. In Trump world, these tweets are part of his strategy.

Consider the recent Trump-Macron summit, which was a masterpiece of negotiation and communication. The two leaders smiled and posed for the cameras, acting as the closest of confidantes. The French president even declared “We are two Mavericks” reinforcing the idea that they unconventional leaders out to reform ossified political systems.

In reality, Trump did not give Macron a single thing that the French leader sought, save for fawning photo-ops. Trump did not give in on the climate-change treaty (known as “Paris Accords”); he did not soften his objections to French and European trade with Iran, and he did not put aside his protectionism for a global trade regime that France seeks. Trump looked like a winner without making Macron look like a loser, although the score was easy to see.

In his first year of presidency, Donald Trump was given all the epithets, observers had decided that he was “unpredictable.”

But judge a tree by its fruits. The “extremism” against North Korea has not resulted in a nuclear war. On the contrary, under pressure from Trump, China was able to get its ally to accept negotiations for denuclearization, and declare a formal end to the Korean War, both of which were unthinkable developments a few months ago.

Or consider Israel. Trump moved the U.S. embassy from Tel Aviv to Jerusalem. The predicted riots in the streets did not come, the expected roar of Arab media did not sound, and the anticipated condemnation by neighboring states largely did not materialize. Why? Trump told the Arab governments that they could howl uselessly (employing empty words) or they could ignore the move and focus on building a common strategy against a shared enemy: Iran. It worked. The day after Trump’s announcement, Egypt’s state-run radio described the embassy move as a non-event.

More importantly, Trump has quietly sown together an unthinkable alliance between Israel and the Arab states, principally Saudi Arabia, Egypt and the Gulf states.

To be sure, this was an opportunity created by the Obama administration. Obama’s benign neglect of Saudi Arabia and his willingness to negotiate, rather than confront, Iran over its Syria adventure and its nuclear program, forced the sheikhs to begin looking for other allies. Russia and China were out of the question, despite their considerable Middle East investments. Each had their own entanglements with Iran. Turkey had shifted into Iran’s orbit. Reaching out to Israel meant that the Jewish state might eventually bring the next U.S. president along—and Israel did not need an education on the dangers posed by Iran.

In another break with Washington convention, Trump changes cabinet-level leaders the way a basketball coach switches out players. If one is not producing the desired results, he sends in another.

After several attempts, Trump gives the impression that he has found his team. Consider the recent changes at key positions: Pompeo at the State Department, Bolton as national security advisor and Gina Haspel as CIA director. Each is a strong, if not dominant, personality that shuns photo-ops for closed-door meetings. They know that they will only stay if they can produce results.

The real challenge that will face this trio with President Trump is not the nuclear deal with Iran. Trump has been criticizing the deal since he ran for office in 2015. Israel’s Prime Minister Benjamin Netanyahu’s televised address presented a literal mountain of documents showing that Iran has been misleading UN inspectors as well as U.S. and EU diplomats about its nuclear program. Under the old rubric of “words equal policy,” the words of the president and the prime minister would mean that the Iran deal is about to shed. But all of this may be cover for Trump to secure what he views as a better deal.

Let’s hope that the Trump Doctrine—which includes publicly threatening to walk away, chastising with social media and then making a deal—doesn’t actually apply in the case of Iran.

Here is why: the threat of Iran is larger than its nuclear program.

Let’s not forget that Hezbollah is Iran’s proxy and that Hezbollah has killed more Americans than any other terror group, except for Al Qaeda. It reach extends far beyond its Lebanese neighborhood.

The largest trader in foodstuffs in the Democratic Republic of the Congo is Congo Futur, a firm that was born as the Kabila clan was coming into power in Kinhasa. Congo Futur is owned by a Lebanese businessman named Kassim Tajideen, who, in May 2009, was placed on the U.S. sanctions list as a major financier of Hezbollah. Eighteen months later, in December 2010, Congo Futur, was itself sanctioned. We now know that he moved tens of millions of dollars to finance terrorism.

“The [Obama] administration should be aware that while it has been busy trying to coax the mullahs to the negotiating table, Tehran has hardly been idle, sending its public officials, diplomats, military officers, and mullahs around the globe, preemptively constructing a web of political, military, and commercial links against the day when they might come under serious pressure. And perhaps nowhere has this pattern of behavior been more evident than in Africa, where the Islamic Republic’s growing reach presents a challenge to the strategic interests of America and its partners in an increasingly vital part of the world.”

Later that same year, in December 2010, Iranian Revolutionary Guard Corps operation was interrupted trying to smuggle thirteen containers loaded with mortars, rockets and other military-grade weapons through the port of Lagos, Nigeria, for various destinations in West Africa.

In August 2012, two Iranian operatives, Ahmad Abolfathi Mohammed and Sayed Mansour Mousa, both subsequently confirmed as members of the IRGC’s elite Quds Force, were caught with fifteen kilograms of RDX explosives in Kenya while they were planning attacks on Americans and Israelis in that East African country. They were convicted and sentenced by a Kenyan court to life imprisonment in 2013.

If the United States seeks to seriously take on Iran, the battlefield will stretch over the Middle East, Africa, South America and perhaps even into the United States itself. (A Hezbollah cigarette-smuggling operation was exposed and broken up in North Carolina in the Obama years, closing off a major source of funds for Iran-directed terror activity).

In Libya, elements of Iran’s Revolutionary Guard, recruit members Kabyle (Berber) into Islamic militias that strike terror across North Africa. The same revolutionary guard is active in Senegal and Côte d'Ivoire, through the Lebanese community.

At Casablanca airport, in March 2017, Kassim Mohammed Tajiddine was arrested, based on an international arrest warrant issued by the United States. Tajiddine is believed to be the “financial brain” of Hezbollah. He is suspected of money laundering and terrorist recruitment across Africa.