Will the Western Sahara Crisis Tear the Maghreb Apart? 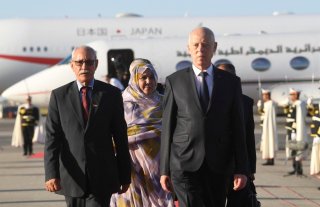 Since late August, Morocco and Tunisia have been engaged in a diplomatic spat that risks spilling over into their trade relations. Morocco withdrew its ambassador from Tunis on August 26 after Tunisian president Kais Saied received Brahim Ghali, the leader of the Polisario movement, which demands self-determination for the people of the Western Sahara, over which Morocco claims sovereignty. The Tunisian government also recalled its ambassador from Rabat in response. Ghali had come to Tunis to participate in the Tokyo International Conference on African Development, and photos showing Saied welcoming him at the airport circulated on social media. Morocco quickly announced that it would not be participating in the conference, and reports emerged on August 31 that it was considering cutting economic ties with Tunisia. Last week, the Moroccan Consumer Rights Federation announced a campaign to boycott Tunisian goods.

The crisis has now pulled Tunisia into a longstanding rivalry between Algeria and Morocco centered on the issue of the Western Sahara. Algeria has backed the Polisario since its formation, thus confronting Morocco, but Tunisia has historically sought to remain neutral.

How did Tunisia suddenly become entangled in the dispute between Algeria and Morocco over the Western Sahara, and what can we expect going forward?

Tensions between Morocco and Algeria over the Western Sahara issue have been rising for nearly two years. In November 2020, the Polisario proclaimed an end to a nearly three-decade-long ceasefire after Moroccan forces crossed a buffer zone to remove Sahrawi protestors who were blocking the main road connecting Morocco to Mauritania, which passes through the Western Sahara. The following month, the Trump administration recognized Moroccan sovereignty over the Western Sahara in exchange for Morocco’s normalization of relations with Israel. This represented a shift from Washington’s earlier position of supporting a United Nations-led mediation process.

By mid-2021, Algeria had severed relations with Rabat after a months-long diplomatic standoff. Earlier in the summer, following a statement by Morocco’s ambassador to the UN supporting the Algerian region of Kabylia’s right to self-determination, Algeria accused its neighbors to the west of supporting groups responsible for wildfires in Kabylia. The final break occurred over Morocco’s alleged use of the Israeli Pegasus spyware on Algerian officials.

Meanwhile, Tunisia had begun undergoing its own internal crisis. On July 25, 2021, Saied froze the Tunisian parliament, initially for a period of thirty days, invoking an article in the constitution that he said permitted him to suspend the body in the face of “imminent danger.” This act, while initially met with significant support, ultimately led to a constitutional referendum held exactly one year later, which reflected the dubious legitimacy of the president’s constitutional project.

Domestic support for Saied has also been challenged by the country’s severe economic problems. On top of blows to the country’s critical tourism industry caused by the pandemic and a mounting debt crisis, which have forced the government to raise food, fuel, and electricity prices, Tunisia is now in need of more natural gas for its power generation. That’s where Algeria comes in.

Algeria supplies approximately two-thirds of Tunisia’s natural gas, which the country is heavily dependent on for power generation. Hot temperatures also forced Tunisia to increase its electricity imports from Algeria in the first half of 2022. Overall levels of trade between Tunisia and Algeria dwarf those between Morocco and Algeria. In 2019, for example, total Algerian exports to Tunisia totaled $1.43 billion, compared to $482 million to Morocco.

Some analysts argue that this reflects a broader investment by Algiers in Tunisia’s stability, reinforced by recent events such as the land border reopening between the two countries, Algerian president Abdelmajid Tebboune’s expressed support for Saied, as well as loans, security assistance, and donations of oxygen tanks during the peak of COVID-19.

More broadly, as the global energy crisis caused by the war in Ukraine intensifies, Algeria now appears to be leveraging its position as a natural gas supplier. In Europe, it has secured deals to supply more energy to countries like Italy while also pulling back from relations with Spain over its public recognition of Morocco’s autonomy plan for Western Sahara (which Polisario has rejected). Algeria also threatened to divert natural gas supplied to Spain, but it apparently never followed through on the threat. French utility company Engie SA is reportedly in talks with Algeria on increased natural gas imports following French president Emmanuel Macron’s visit to the former colony, which drew comment for the shift it represented in French-Algerian relations.

In addition to its more active geopolitical engagement in Europe, Algeria’s foreign policy in recent years has turned toward Sub-Saharan Africa. Although likely spurred by broader economic and security concerns, the move is also thought to be partly in response to Morocco’s activism on the continent. This activity recently led Morocco to accuse Algeria of lobbying countries that have expressed support for Morocco’s position vis-à-vis Western Sahara.

The recent spat between Morocco and Tunisia can therefore be tied back to the global energy crisis and Algeria’s increasingly assertive position in geopolitics, as well as Tunisia’s need for Algerian natural gas and the increasing shakiness of Saied’s position. It also would not have occurred without the growing tensions between Algeria and Morocco over the Western Sahara.

While the threat of a more serious armed conflict flaring up in northwest Africa over the Western Sahara is not particularly acute, the diplomatic crisis among the Maghreb countries is likely to continue simmering.

All three Maghreb countries have been suffering from rising food prices caused by the war on Ukraine and recent droughts. Food shortages may threaten the popularity and stability of their governments.

Each country also faces its own internal political pressures. Buoyed by the recognition of its position by the United States, Spain, and, most recently, Germany, there is no indication that Morocco will backtrack from its insistence on the “territorial integrity” of the Western Sahara. Several African countries have also opened consulates in the territory since the U.S. decision.

Algeria’s economic reliance on hydrocarbons means its current activities are unsustainable without structural reforms and diversification. Moreover, Algeria’s limited export capacity and existing pipeline infrastructure, as well as its need to be seen as a reliable supplier, mean that it cannot become a savior for Europe nor consistently dangle gas exports as leverage.

Tunisia is in the process of negotiating a loan from the International Monetary Fund, but the situation represents something of a Catch-22 for Saied. While the loan would help the country avoid financial crisis, it is highly unpopular domestically and could jeopardize the president’s already tenuous support.

Some observers worry that Algeria could become increasingly isolated as more and more Arab countries normalize with Israel and line up against Iran, with whom Algeria has maintained relatively positive relations. Algeria appears to be already receiving pushback against its assertive foreign policy as it prepares to host the Arab League summit in November. Moreover, Morocco may be winning in the competition between the two Maghreb rivals for a strategic presence in Sub-Saharan Africa. Finally, experts have suggested for decades that the reluctance of the European Union and the United States to disrupt relations with Morocco has allowed the latter to obstruct UN mediation processes.

The Western Sahara conflict has prevented Maghreb integration, leading to lost opportunities for prosperity in the region. It has also fueled an arms race between Algeria and Morocco and led to human rights violations against activists. Growth and stability in the Maghreb are important for countering terrorism and controlling migration across the Mediterranean. The Biden administration, however, has made clear that while it is renewing the United States’ emphasis on the UN process for the Western Sahara, it will not reverse the Trump administration’s recognition of Moroccan sovereignty.

The United States should continue signaling to Algiers that it is a valued partner, in order to balance Washington’s current position on the Western Sahara. In addition to expanding its involvement in the UN-led process, continued high-level engagement with Algiers will be important to discourage it from taking an even more assertive external posture and compromising the independence of countries like Tunisia.

Sabina Henneberg is the Soref Fellow at The Washington Institute for Near East Policy, where she focuses on North Africa. Sabina was formerly a Senior Analyst at Libya-Analysis LLC.