To Win in Syria, America Must Rethink Its Kurdish Policy 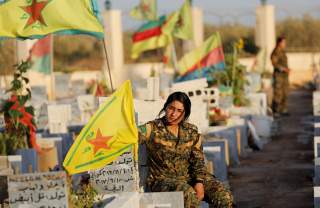 Last month, the United States and Turkey reached a temporary agreement on a proposed “safe zone” in Northeastern Syria, marking the latest installment in a pattern of threats and negotiations that has characterized the past several years of the two countries’ relations. While the United States appears to have staved off a unilateral Turkish military operation against the Kurdish-led Syrian Democratic Forces (SDF) for the time being, the details of the plan are vague—and it is likely to prove to be little more than a stopgap measure. Rather than negotiate from a position of strength, American diplomats intervened at the last minute, and prioritized a solution that would allow Turkish President Recep Tayyip Erdogan to save face rather than force his government to address the root causes of the conflict at hand. In doing so, they have averted a temporary escalation by pushing its resolution further down the diplomatic road.

This crisis is symptomatic of a larger problem of regional strategy. Until now, American management of Turkey-SDF tensions has made three major mistakes: Privileging Turkey’s NATO history over Erdogan’s anti-Western turn, viewing Kurdish groups as military actors without the potential for political engagement, and separating the conflicts in Turkey and Syria despite their undeniable connections. Each of these failed assumptions is predicated on an outdated vision of the Middle East and the role that outside powers, including the United States, play in it. Each of them has also threatened America’s ability to achieve its stated goals in Syria. If the United States seeks to withdraw its forces from Syria while ensuring the enduring defeat of ISIS and working towards a negotiated end to the eight-year conflict, these lessons of the “safe zone” crisis bring a new strategy to light.

A Reset with NATO

Turkey has been a member of NATO for nearly seventy years. Throughout this time, this has earned it near-unconditional American support for its foreign policy objectives—even those that relate to different geopolitical circumstances from those under which it acceded.

In joining the alliance, Turkey agreed to “settle any international dispute in which [it] may be involved by peaceful means in such a manner that international peace and security and justice are not endangered” and to “safeguard the freedom, common heritage and civilisation of [its] peoples, founded on the principles of democracy, individual liberty and the rule of law.” It would be hard to argue that Erdogan’s unilateral incursions into peaceful Syrian territory, discrimination against ethnic and religious minorities, and jailing of tens of thousands of politicians, activists, journalists, academics, and dissidents meet this standard. It would be harder still to claim that his deepening political and military ties with Russia—whose interests NATO was founded to counter, and whose regional presence Turkey was admitted to NATO to balance—is compatible with the broader spirit of the treaty.

For Erdogan, Turkey’s NATO commitments are now little more than words on paper. For the United States, however, they allow policymakers to justify the current Turkish government’s worst authoritarian excesses. Turkish officials know this—hence their confidence in extracting concessions on Syria and maintaining international silence on their domestic crackdown. The United States must not allow Turkey to continue to take advantage of this difference in perspectives. Instead of viewing shared NATO status as grounds for appeasement, the United States should hold Turkey to the standards the alliance claims to have.

It should also recognize that Erdogan’s autocratic turn is inseparable from his rapprochement with Russia. His concentration of power and institutionalized corruption allow him to make deals—like the S-400 agreement—that benefit a powerful few rather than the interests of the country as a whole. The strongest pro-Russian voices within his government tend to be the strongest supporters of repression at home and aggression abroad. Moving Turkey back towards NATO will, somewhat ironically, require Western support for the democratic and pluralist forces whose concerns have gone unheard internationally for decades out of fear of upsetting a NATO partner.

Seats at the Table

A new political approach will also be necessary for addressing Kurdish groups. Historically, the United States has viewed them through a military lens, with little regard for the political reasons why they fought. This pattern was well established in the last two decades of the twentieth century. In Iraqi Kurdistan, where an armed Kurdish resistance movement was useful, the United States worked with such groups when it was advantageous, abandoned them to Saddam Hussein’s regime when it was not, and allowed local leaders to establish unstable and undemocratic rule when the region gained autonomy. Across the border in Turkey, where such a movement was a threat, the United States gave successive Turkish governments a blank check for war at a great human cost. Whether armed Kurdish groups were considered partners or terrorists, the logic of engagement was the same: they were military actors whose ultimate political goals—and civilian constituencies—did not matter.

Today, we risk seeing this trend repeat itself in Syria. The SDF liberated more Syrian territory from ISIS than any other actor in the conflict, but its political wing has not been granted a seat at the negotiating table. The challenges it faces today—justice for the thousands of ISIS prisoners it holds, reconstruction of dozens of war-torn cities, and long-term safety from hostile neighbors—are all political questions with solutions that require international efforts to solve. Despite this, the United States appears wary to engage, instead seeking solutions that address security issues on the surface while avoiding their political roots.

If the United States continues with this reductive view, it will miss out on the essential roles the Kurdish people can play in a realigning Middle East. Right now, there are about forty million Kurds living in four states crucial to regional politics: two million in Syria, six million in Iraq, twelve million in Iran and twenty million in Turkey. The most widespread political program among them today is based on secularism, women’s rights, and a vision of the state that does not exclude based on ethnicity or religion, but accommodates the region’s rich diversity through decentralization. The United States should commit to political engagement with the Kurdish groups that espouse these values across the region, and allow the successful military partnership with the SDF to serve as the beginning of a new strategy—not as a repeat of a failed one.

Underpinning both of the failed American assumptions about the Turkish state and the Kurdish people discussed so far alike is an insistence on separating their conflict along state borders. This is a form of compartmentalization neither party subscribes to on its own. At the root of the Syrian safe zone crisis are Turkish fears of their domestic Kurdish question. The current government insists on a military solution because it is what they have always fallen back on at home. Syrian Kurds, on the other hand, fear a Turkish invasion because they know how Kurds on the other side of the border have been treated. The only point of agreement between the two sides might be an understanding that their conflict is transnational—something the United States has failed to do.

The United States has recognized that Turkish-Kurdish tensions in Northeast Syria require a negotiated settlement, that further military action will be detrimental, and that it has a crucial role to play in mediating such a deal. However, it has not yet been able to broaden this logic to reach a true starting point for a solution: U.S. engagement for peace in Northeast Syria requires U.S. engagement for peace in Turkey.

Recently, more influential American voices have been engaging with this idea than ever before. The Syria Study Group’s Interim Assessment, published in early May, found that “the long-term solution to Turkish-YPG [People’s Protection Units] tensions lies in a renewed Turkey-PKK [Kurdistan Workers’ Party] peace process.” In his first op-ed since his retirement, former CENTCOM commander General Joseph Votel wrote that “the ideal solution to the security dilemma of all parties involved is for Turkey to resolve its domestic Kurdish problem peacefully,” and that “the United States must remain diplomatically engaged to encourage a peaceful solution.”

American support for a renewed peace process will require new patterns of engagement with the Turkey and Kurds alike. The United States will have to be willing to amplify those figures in Turkey that have supported a return to peace since previous talks broke down. This year, elements of the U.S. government have shown a willingness to recognize the crackdown on pro-peace voices—especially the pro-Kurdish Peoples’ Democratic Party, which I represent in Washington. The State Department’s annual Turkey Human Rights Report cited the 6,000 members of our party jailed on terror charges for supporting democracy and opposing war. The Tom Lantos Human Rights Commission in the U.S. House of Representatives now advocates for perhaps the most high-profile HDP political prisoner, our imprisoned former co-chair Selahattin Demirtas, through its Defending Freedoms Project.

To truly work towards a solution, the United States must go further in explicitly urging Turkey to open up space for Kurdish political participation and end the criminalization of pro-Kurdish opposition. After forty years of war, the Kurdish people are more than willing to pursue political avenues to address their grievances. It is the current Turkish government that has made these avenues unavailable and made further conflict unavoidable—a truth the United States should help it to realize.